Mercedes meets the moose once again 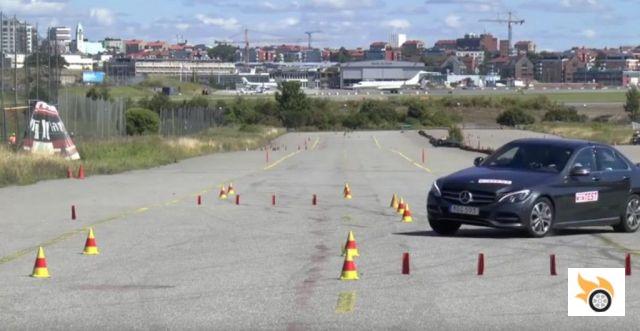 The Swedes at Teknikens Varld, famous lately for sometimes performing tests of dubious veracity, have subjected the Mercedes C350e (the plug-in hybrid version of the C-Class) to the famous moose test. The Mercedes didn't roll over, but it couldn't stay on course when the test was done at speeds above 40 mph (64 km/h). Above that speed, the car's butt literally goes sideways. At Teknikens Varld they claim to be surprised by this result when a DS 5 manages to pass the test up to 75 km/h.

Mercedes Sweden responded to the Swedish publication by recalling that the Mercedes C350e successfully passed a similar test in the U.S. and blamed the car's poor performance on low tire pressure. According to Mercedes, when the car returned from the test the tire pressure was too low.

What could have happened? Assuming that the tyre pressure was correct, the enormous extra weight on the rear axle causes a high inertia that the ESC could not control due to poor tuning or calibration. The battery of the C350e is located behind the rear seats and in total the car weighs, in its basic version, 1,780 kg when the heaviest C (AMG apart) weighs 1,595 kg (C250 BlueTec).

It should be noted that a second test was carried out again, this time with Mercedes engineers present and the car passed the test without any problems. Mercedes stresses in its statement that the conditions were not the same, as it was raining, so the results could not be entirely conclusive.

add a comment of Mercedes meets the moose once again