Will only be available with five-door bodywork.

New tastes have put an end to the sporty three-door (SC) and estate (ST) options. In return, SEAT is proposing a sportier, more sporty design, with proportions that are more in keeping with that purpose. It has shrunk 2 millimetres in length and 1 millimetre in height, but has grown 87 mm in width. The track width has expanded by 60 mm at the front and 48 mm at the rear, and the wheel arches can accommodate up to 18-inch wheels.

With an almost identical longitudinal size, the wheels are now much further apart, 95 mm further apart, up to 2,564 millimetres, practically like the SEAT Toledo! The wheels remain at the ends of the body, reinforcing its presence, but above all with a better habitability. The design combines aesthetic elements seen in the Leon, in fact, the two models look more similar than ever. There will be those who confuse them, for sure.

According to the manufacturer, the cabin has gained 42 mm in width, 24 mm in height in the front seats and 17 mm in the rear, with a 35 mm more generous legroom in the rear. The boot has grown by 63 litres to 355 litres and has a lower load floor. SEAT claims it is the most spacious B-segment car with the largest boot without being an MPV or SUV. Watch out for its yet-to-be-revealed all-wheel-drive variant, the Arona.

The MQB platform and new manufacturing processes, with more hot-formed steel parts and laser welding allow for greater structural rigidity, 30% more than the fourth generation. The car is safer and the wheels can be moved further away from each other, and less space can be devoted to the programmed deformation zones. The Ibiza has also been slimmed down, but we still don't know how much. SEAT says it will be sportier, especially the FR, with more efficient suspension and two selectable settings on the move.


The engine range will consist of petrol and diesel engines, and as a novelty, a version of compressed natural gas (CNG). In the basic steps of the range will be the three-cylinder 1.0 TSI, with 90 (TGI only), 95 and 115 hp, rivaling the 1.6 TDI in three power levels: 80, 95 and 115 hp. The natural gas version is the first to offer the Volkswagen Group in this segment, but is not the first outright, as there was the Fiat Punto Natural Power before. The previous generation of the Ibiza briefly had an LPG version with naturally aspirated engine 1.6. 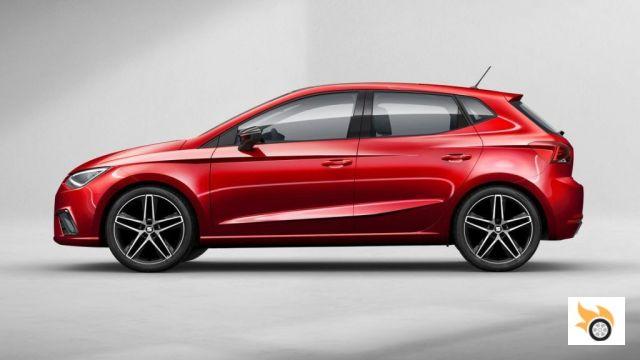 VAG signs up for rightsizing, several engines increase their displacement to comply with Euro 6c

As we can see, the 1.4 TDI disappears, the larger displacement engine pollutes less, and the 1.2 TSI petrol engine has also disappeared, which I won't miss. Also disappears the highest power TDI, the highest step will arrive later this year, with the 1.5 TSI EVO and 150 hp power. Even more powerful Cupra versions are expected in the future. The lower-powered engines will have five-speed gearboxes, above will be six-speed, and seven-speed DSG gearboxes will also be available.

In the interior we distinguish a driving position with the controls more oriented to the one who holds the reins, with a touch screen up to 8 inches with the latest possibilities in connectivity. The new Ibiza will feature various technological elements linked to the MQB platform, the most interesting of which relate to active safety, such as radar cruise control, traffic sign reading, blind spot vehicle sensors, rear cross-traffic alert, etc. Other technologies will help you avoid accidents, such as emergency stop if the driver does not respond, or automatic braking before and after a collision. 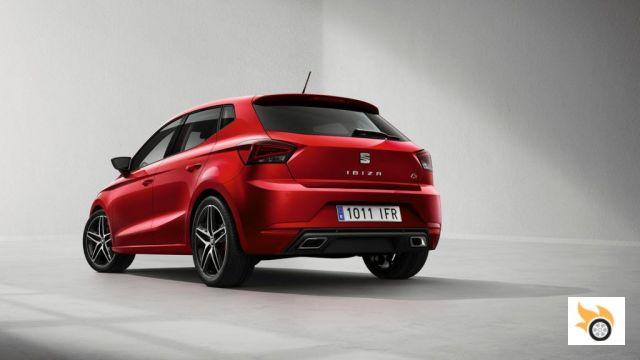 First details of the range

SEAT will offer four trim levels, similar to the other models in the range. At the entry level are the Ibiza Reference, whose standard equipment has not been detailed. In a second level is the Style level, more endowed, which will probably be the best-selling model for its balance between price and equipment. Nor do we know what it will carry, or what it will cost, but we can expect prices very similar to the current ones.

On top of that you can choose two flavors, the XCellence and FR, with the same price. Those looking for a more functional, comfortable and equipped car will look at the first, and those who prefer a more spirited driving will opt for the acronym "Formula Racing". The images that illustrate this information correspond to these top of the range versions, the FR have Alcantara on their seats, the XCellence also.

Later we will know the full details of its marketing, as this is a first meeting and SEAT has not told everything.