If we talk about sporty versions, the Nissan Juke is a unique option in the B SUV market, including crossovers. None of its rivals offer so much power. First they brought out a 190 hp version with automatic transmission and all-wheel drive, all in the same package, which had a minimum of logic.

Then came the Juke Nismo, with 213 bhp, a better look and some improvements. When I tested that model I was quite disappointed, especially because of how badly the front axle digested so much power. You can choose between a stability control that doesn't stop braking to gain traction, or go crazy with a wheel that slips out of control. Nissan didn't want such a burnout car, but it ended up proving us right.

That problem isn't present in the Juke Nismo RS, which in its front-wheel-drive version has a mechanical self-locking system, a real one. For that small detail alone, I'm partially reconciled with this car. What's more, the Juke Nismo disappeared with the restyling, its successor is the Nismo RS, shown at the 2014 Geneva Motor Show. Very good Nissan, very good.

You can choose the Juke Nismo RS in two flavours, with front-wheel drive, manual gearbox and self-locking, or all-wheel drive and automatic transmission. Another notable difference is that the automatic has four-wheel independent suspension, the front all have a torsional rear axle, semi-independent. The front-wheel drive version has 218 hp and 280 Nm of maximum torque, as the CVT gearbox limits power delivery to the automatic version.

The all-wheel drive version doesn't need the front self-locking, because its all-wheel drive system solves most of the problem. On the other hand, the rear axle has variable torque distribution, so you don't miss the front differential. In other words, it would be a bit redundant. I haven't tested the Nismo RS with all-wheel drive, only the front, but my colleague Guille did, and I invite you to read his test. 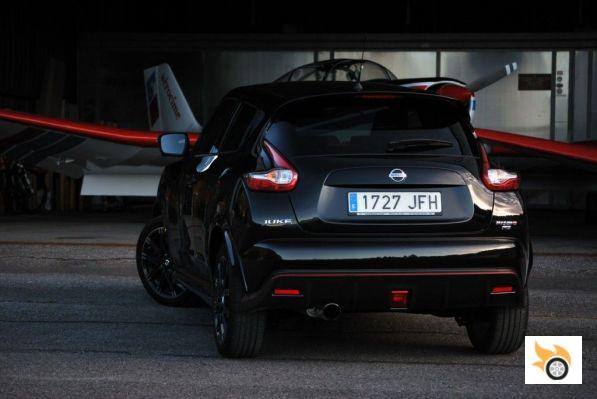 Nissan and I solved their differences on the roads of the French Alps. We came to a curve on the attack and applied the brakes with determination. At first, there's a slight spongy feel. The car is stable and the braking can be dosed well, we enter the curve, we pass the apex, and we hit the accelerator. We will notice that the steering wheel is possessed and that it pulls to the inside of the curve, it goes off without understeering!

That's the magic of self-blocking. The wheel that has the best traction is the one that receives the most torque, causing a yaw effect, the car gets into the corner much better. With the Juke Nismo without the self-blocking, understeer is guaranteed, and the ESP would cut the party short. In the Nismo RS the ESP works much less. Now, yes, I'm more convinced. If we had the automatic, we'd have an artificial feeling, losing the reference of how much we put our foot on the accelerator, how much we accelerated.

Although the driving conditions didn't allow us to constantly go with the knife between our teeth, it was possible to check between one bend and the next that we were talking about a different story. The horses are now digested much better and the ESP is left for what is really needed. Resolutely, it's not only more fun to drive, it's also safer, because the car raises its threshold for forgiving driving mistakes. 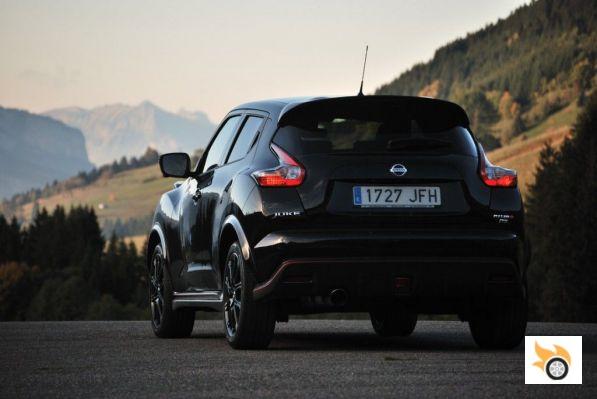 For starters, the aesthetics, which are more aggressive, and the logo clearly distinguishes the Nismo from the Nismo RS. Optionally you can have a Recaro bucket seats that subtract some comfort, but are appreciated when you want to have fun with the car. Inside there are details, such as the red strip on the steering wheel (indicating the center), the dashboard or the gearshift knob.

The brakes have been upgraded, on the front axle they've gone from 296 mm diameter to 320 mm, although I haven't pushed them enough to notice the difference. The chassis is a little more reinforced, which would help in tricky situations, but I wouldn't say I noticed it.

I do feel that the suspension is now firmer and grips the car better, which is in line with what was advertised in the press kit. I'll have to drive it for longer, but I found it to be a good balance between sportiness and comfort. The one thing that did fall flat is the exhaust sound, it doesn't say anything. Almost all of the noise comes from the cowling, it sounds very much like an intake, in that sense it's about as exciting as my Prius when it revs up. According to Nissan, the muffler is bigger.

I would recommend this model to anyone looking for something different (and more expensive) than the "classics" of the racy B-segment, I'm talking about Renault Clio RS, Ford Fiesta ST or SEAT Ibiza Cupra. In its segment, the Juke Nismo RS has no rivals. Compacts can be more fun and sporty, physics is physics, but when it comes to attracting attention, that's where the Juke has the upper hand, both for better and for worse.


Perhaps in another era with more joy to spend, and with today's technology, would have appeared this car with a diesel engine of 136-150 hp, as the Nissan Renault Alliance already has. This car barely accounts for 3% of the Juke's sales volume, it doesn't seem to make much sense to bring out something like this. Consumption is bearable if you know how to drive it. Less powerful versions of this engine run the Qashqai and X-Trail with averages of 6-7 l/100 km of petrol at a leisurely pace, I can vouch for that.

However, any engine with 200bhp or more that we ask for power will give us power, and that's by burning petrol. It's not a car for crying about fuel consumption. It can spend 8 litres or less, but looking for the tickle it will exceed 10, and you have to accept it. If you don't like it, buy a diesel or put "Turbo" logos and stickers on your humble economy petrol. You can't have everything, can you?

A drive with the Nissan Juke-R 2.0

While the Nismo RS can be a very fun car, the Juke-R is the ultimate... if you have a checking account full of zeros, it's a very limited production car. I met the "1.0" in Dubai when they brought it out, and they let me taste it at least a little bit. Nissan takes a lot of care with these cars because they are very expensive, that's the thing about putting the guts of a GT-R in a Juke and making things fit together. 0-100 km/h in 3 seconds and a top speed of 270 km/h are impressive, aren't they?

That first version made 545bhp, and now they've upped it to 600bhp. You can tell the difference by the front bumper with larger air intakes, the rear bumper with aerodynamic diffuser and stronger exhaust manifolds. It can also be noticed in the air intakes of the hood, larger, carbon fiber side sills, matte black finish and small aerodynamic modifications to make the rear axle to step better.

The test to be performed was basic. Accelerate hard in a straight line to a cone turn at an airfield, which could be reached at 150 km/h. It's not a very impressive speed, but the short time it takes to reach it is impressive. It brakes decisively and the rear axle doesn't get out of place, and it takes the right and then left turns with ease. You don't need to be a driver, although when co-driving you realise that there's more to it than meets the eye. 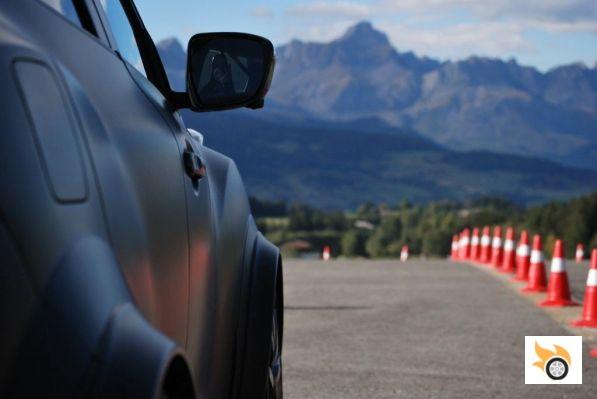 If you abstract from the bodywork, it's a GT-R, but it goes a little louder and a little noisier. If one concentrates on the sound of the engine and the clacking that the brakes make, it is the closest thing to a GT-R without being a GT-R. I don't think I need to say anything about the exhaust sound, let's just say it's "a bit" better than the Nismo RS.

Truth be told, the Juke-R is an aberration, but a cool aberration. There's nothing else like it. The wake-up call of a car that was born as an attention seeker. A whim to enjoy with a ridiculously low petrol price and no worries about what it costs to maintain it. Just changing the spark plugs is a pain, you have to dismantle half the car to get to them?

What would be ideal? Well, a Juke Nismo RS with independent suspension in all versions, the platform already supports it, and instead of a CVT gearbox, put something like the GT-R, fast, and with sensations. But economies of scale rule. The Juke-R is everything the Juke would like to be and can't be.

I really appreciate that the manufacturer has been encouraged to bring out this madness, it is the demonstration that when you want, you can. Other brands will tell us that the platform prevents us from putting more wiring, widen tracks or put a V6 engine in a car 4 meters long. Yes, they can, it's just a problem of money. That's why this thing is prohibitively expensive.