As I'm somewhat sceptical about autonomous driving in the short term, I could ramble on about how long I think it will be before we see a car without a steering wheel on our roads, about whether in the future all vehicles will be like that, whether we will go to work reading the newspaper -digital, of course- or we will go on holiday taking a nap... Honestly, I don't know, what I do know is that when that day comes, I will no longer be a car enthusiast, and cars will become for me an object that I will use like a microwave or a laptop, an object that will not arouse any passion in me.

But not everything will be negative, and is that according to Audi, the day when all cars are autonomous and thanks to the interaction between all the vehicles around us, the circulation will be more fluid, so the traffic jams will be less frequent and / or important. A world without traffic jams! Moreover, accidents will cease to happen, so this Aicon can even dispense with seat belts... 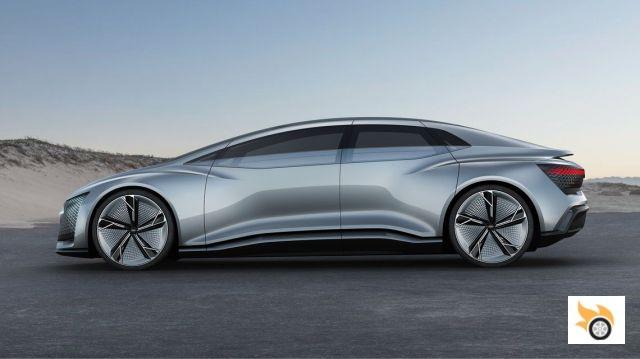 Apart from its autonomous concept, the Aicon has a 100% electric architecture, with the battery located in the floor and a motor for each wheel -the quattro philosophy obliges-. Audi announces that both axles are similar, so that both combine traction and steering. Of course, the system is controlled by software that optimizes both the torque of each wheel, as the steering angle, and even the suspension movements. The efficiency seems hard to imagine... But what I can imagine is how dizzy I'd get on a twisty road, at the pace this Aicon seems to be able to handle, and without driving...


It is also interesting that by entrusting most of the braking to the motors -to recharge batteries-, the traditional brakes do not need so much ventilation, so they can move to the center of the car, allowing more aerodynamic wheels and a better behavior of the suspensions, advantages of the reduction of unsprung masses.

In terms of powertrain, the four engines add up to a maximum power output of 354 hp and 550 Nm, and thanks to an 800-volt high-voltage system, the Aicon's solid-case battery pack - it looks like the near future of batteries - would allow a range of between 700 and 800 km, and could be charged to 80% in less than 30 minutes, albeit at a blistering pace. 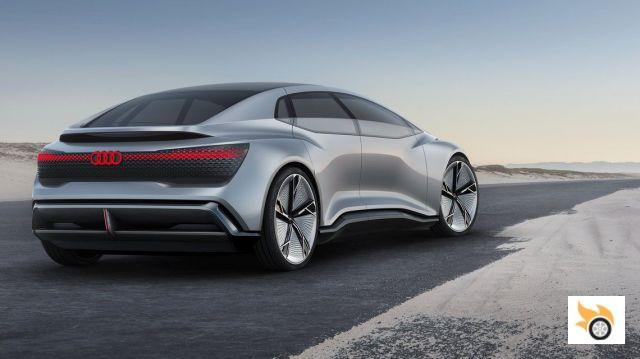 The large 2+2 coupe-like design, 44444 mm long and 2100 mm wide, seems anything but logical, and I doubt there will be many such cars in the future, but such an uncluttered architecture has allowed its designers a great deal of freedom, and an exceptionally spacious cabin. Its "minivan" silhouette is futuristic and its language represents an interesting evolution in the Ingolstadt firm.

In its front view, presents an interesting solid interpretation of the Audi grille, which is surrounded by a very elaborate and interesting surface, formed by hundreds of triangular pixels that serve as lighting -a lighting incidentally that dispenses with high beams, and is that autonomous technology does not need "long" to see far away-, and interact with pedestrians and cyclists to alert them of our presence and intentions.

In terms of styling, and apart from its short-term viability, the front design of this Aicon seems interesting to me, as it aesthetically solves the "grille-less" design of electric cars and its optical groups also solve the problem of the "visual need" of grilles. Good.


On the side, some ribs in the wheel arches pay homage to the Audi Quattro, but the rest of the language is totally new. It highlights the waist ribbing very marked and that runs along the side glazing. I like it because it gives tension and sense to the side, and although "making a fold" in the side windows is not totally new -it was seen during the heyday of wedge-design-, I always liked it for its bizarreness. The huge 26" wheels make it look smaller than it really is, but at the rate the wheels are getting bigger, maybe we'll see them on production cars one day...


The interior for its part is coherent, and is that in a car that drives alone, its design should invite you to relax, so the forms are clean and horizontal, all very minimalist, and ideal for enjoying the trip as if we were flying first class.

In short, an interesting prototype for its technique, with a futuristic design and intelligently solves the problem of the absence of electric grill. What I don't like is that it announces a future in which cars will be fabulous machines to get around, a future in which we pistonheads will have to look for another hobby or drive old school cars.