The origins of the Fiat 500

For younger people born in the digital age and the "everything and now" it is difficult to imagine the setting in which was born what is, like the Colosseum and the canals of Venice, a symbol of Italy in the world.

While monuments often tend to be built with grandeur in mind, the 500 was born for very different purposes. This little car achieved greatness and fame, we might say, with the consent of many.

The 500 was born in 1957, Italy had just emerged from the post-war reconstruction phase and the economic boom was not even dreamed of by the most optimistic economist.

Due to the poor economic situation and the lack of infrastructure, Italians mainly moved around on two wheels. Necessity was the mother of other icons such as the Vespa and the Lambretta. We will dedicate an article to these two other Italian icons and for now we will concentrate on a four-wheeler.

Italians didn't need the grandeur, luxury and opulence of the monuments and buildings that populated their cities. What they needed was a simple means to commute to work and travel with their families.

This means was invented by a certain Dante Giacosa who, without having designed cars, would have created the Italian Ikea given the simple efficiency and functional parsimony present in his projects.

Today many people who look at the 500 think of the Bella Vita, the design and style of our peninsula. Those who appreciate cars also from a conceptual/engineering point of view as products rather than just showpieces imagine so much more.


What comes to mind is another Italic virtue, that of frugality and ingenuity. From every point of view, the 500 expresses the ability of our people to know how to be resourceful and get to work creating functional products in dramatic conditions where others would simply say: "It's not possible".

With this article we want to introduce the 500 to 5 simple details that probably no car or design magazine knows or considers interesting to share; preferring instead the umpteenth chronology of models as interesting as they are irrelevant to the success of this great little car. Anyone who gets into a 500 first notices that there's a canvas sunroof and asks, "Cool! Do you have the convertible version?"

We have to go back to the context of industrial economic poverty in which the 500 was born. In your opinion, what designer, let alone the genius Giacosa, would have proposed a purely aesthetic choice for a popular car?

Well, the reason why every 500 (add) ever produced has a sunroof is that canvas costs less and weighs less than steel. In scarce conditions, the price of steel had skyrocketed, heavily impacting the cost of new cars.

Every cut of the precious material allowed the savings to be passed on to the end customer. In addition, since there was also a shortage of gasoline, less weight meant less consumption and lower running costs for the families of the time.

When we think of the curves of the iconic Italian, we imagine a designer with a turtleneck who spends hours designing it aspiring to win a beauty contest. The shape of the 500, which from above resembles that of an egg, is still dictated by rational necessity and not by design. 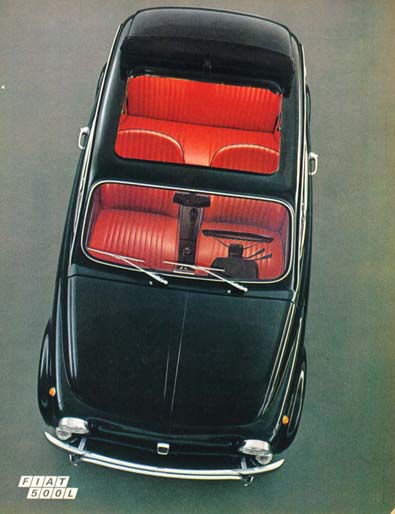 The curvature that runs along all sides acts as a reinforcement of the bodywork because, with the sheet metal of the time, a perfectly smooth surface would have been weak.

The oval shape is instead a first attempt to incorporate aerodynamics into a people's car, a feature that makes the F1 driver win and saves fuel for millions of drivers.

3- The exploitation of space

It's easy to get into a vintage 500 and exclaim "How uncomfortable, there's no room!" when modern small cars with the same number of passengers are twice as big.

We can take one of the already smart modern cars, the Smart, as a comparison. Next to an old 500, from being the crumb of the road the German two-seater will look like a truck.

The difficulty of designing small cars is that they have to do all the things a bigger car does but with less power, less space and less expense.

In designing the 500, Giacosa had to take into account that the average Italian family of the time had 3 children.


Space was certainly not lacking. Small as it may seem, this 50's car accommodates 4 adults, with a footprint on the road more akin to that of a quad than a real car. 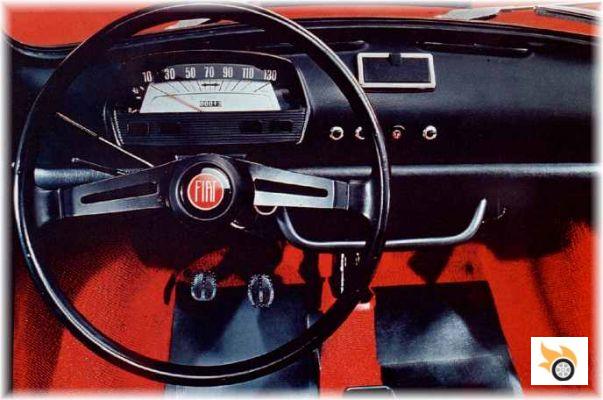 You read that right, we weren't wrong. In the design of the 500 Giacosa everything that wasn't necessary was cut out, including one of the suspensions. Why install a wheel suspension when you could install a single one between the wheels? This allowed for greater savings in raw materials, lower price and weight.

This choice was criticized at the time as a design deficit by many journalists and engineers.

One of them, however, thought it was a very good idea and will redo it in his creations for years to come. That gentleman was John Cooper, creator of the Mini Cooper in 1959 (two years after the launch of the first 500!).

Following the principle that what doesn't exist can't be broken, the 500 demonstrates an automotive simplicity that is inconceivable today. Several functions are performed by parts that ironically do not exist.

For example, the interior light does not exist as a separate part but is incorporated under the rearview mirror.

When the engine compartment (at the rear) is open, the engine itself looks even smaller given the empty space around it. This is because the more free space there is, the easier it is to service the engine without replacing it, by directly removing parts and reducing the number of man hours needed for maintenance. Try doing the same with the same modern version of the 500 and then we'll talk again.

We've talked to you about frugality, dramatic economic conditions and savings. So what does charisma have to do with it? Giacosa was still Italian and, unlike Ford or Porsche, he had an artistic sense worthy of his predecessors Da Vinci and Michelangelo.

The car was intended for a popular clientele, but it didn't have to look popular for that reason. The design was an immediate success, either because of the likeability it inspires or because of the humble demands of its features. You want for the fact that it became the car of almostall Italians and because it juggled in the city center as a small motorcycle.

Whatever you want to think of the Fiat 500, its simplicity is still able to surprise those who are curious to discover what lies behind the success of a product first of genius and then design. 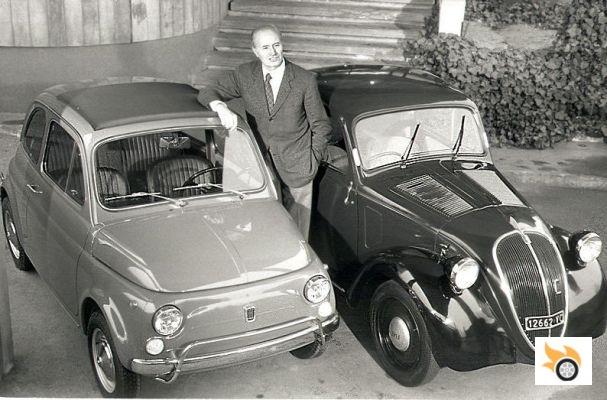 Hybrid car vs. electric car: all the pros and cons ❯

A Ferrari 335 S has been auctioned for 32 million euros.

This is Mazda's new SUV without camouflage

Prices of the new Renault Mégane 2016 in Spain

Dreaming of a Nissan GT-R? Think long and hard about it

add a comment of The Fiat 500 is NOT a style or design icon.