BMW M550d xDrive, the most powerful 6-cylinder diesel in the world

Its figures are spectacular, with an inline six-cylinder engine, three litres of displacement, 400bhp, 760Nm and, most impressive of all, four turbos! The turbos are split into two pairs: there are two high-pressure variable geometry turbos and two low-pressure units with super-low inertia for extra low-revving response. That is, two tiny turbos to help at low revs and prevent lag, and two others to help at mid and high revs to help thrust remain constant throughout the rev range. 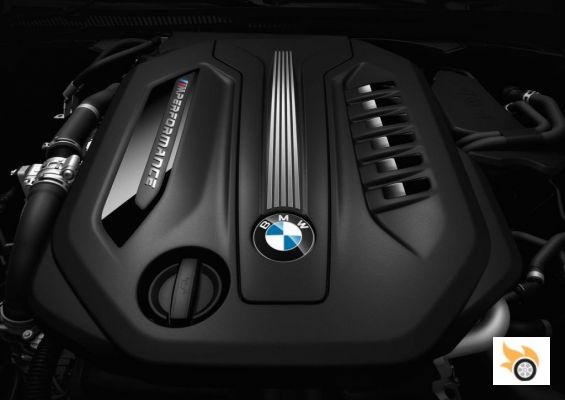 Combined with the xDrive all-wheel drive system and 8-speed Steptronic automatic gearbox, the M550d is capable of 0-60 mph in 4.4 seconds and a limited top speed of 250 mph on 245/40 R19 front and 275/35 R19 rear tires. This means that it is three tenths faster than its predecessor in the sprint to 100 km / h, but it is at a performance level very similar to that of the BMW M5 F10. It is also available in the Touring bodywork, familiar, in which the performance is a little more diminished (0 to 100 in 4.6 seconds). Meanwhile, the homologated fuel consumption ranges between 5.4 and 6.6 l/100 km.

BMW assures us that, although it has an all-wheel-drive system, the rear-wheel-drive characteristics haven't been affected too much, with the front axle only coming into play when rear axle losses are too noticeable. As standard, the M550d xDrive features M sports suspension lowered by 10mm, integral active steering and oversized brakes with calipers finished in metallic blue.


On the exterior, it has an M aerodynamic package, with elements such as mirror housings or some details of the bumpers in Cerium Grey and alloy wheels with M design in 19 inches. Inside, there are no changes from another well-equipped 5 Series. Ergonomically speaking, it's a more driver-centric interior than, say, that of a Mercedes-Benz E-Class. You can count on optional M sports seats in Dakota leather or cloth/Alcantara and M sports steering wheel, as well as equipping BMW Connected, which ensures a high level of connectivity.


Recall that BMW already launched an M550d in the previous version, which shared the same tri-turbo diesel found in the X5 and X6 M50d range. To this day, it's still an engineering marvel, but BMW has outdone itself again. For anyone who wants a high-flying everyday saloon and likes a diesel engine, perhaps this is the car for you. Few diesels can boast 133 bhp per litre...

add a comment from BMW M550d xDrive, the most powerful 6-cylinder diesel in the world