Skoda already has its Ateca, sorry, Karoq. If we remove the specific design elements of the Skoda version, we're basically talking about the same car with SEAT badge. Externally they differ by two centimetres in length, only the Skoda has 11 litres more boot space, 521 in standard configuration. If you opt for the Varioflex system (length adjustment of the second bench seat) the useful volume ranges between 488 and 588 liters of capacity without folding.

The Karoq has the same market approach as the Ateca, being below the Tiguan. The available engines are five and less powerful than the basic Tiguan. In the access range is the 1.0 TSI three-cylinder and 1.6 TDI, both with 115 hp. In a middle step, the 1.5 TSI EVO and the 2.0 TDI, with 150 hp. At the top of the range will be the 2.0 TDI with 190 hp. The combinations of engines, gearboxes and type of traction are virtually identical, only that the Karoq does not opt for the 2.0 TSI, the Ateca does. 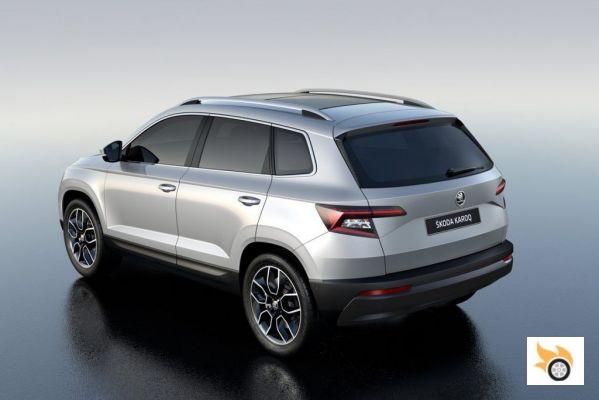 As expected, the Karoq does not incorporate any new features within the Group, but within the brand. It is the first model to be able to opt for the 100% digital dashboard that uses the Tiguan, as well as driving aids that debuted in the Audi Q7 in 2015. It has various "knick-knacks" such as the retractable tow ball, 100% LED headlights, wheels up to 19 inches, interior lighting package, inductive mobile recharging, etc..

We don't know the prices yet but they should be more or less in line with the Ateca and obviously below those of the larger Kodiaq. The equipment levels are not known, only the Ambition level is detailed in the press kit, which already gives access to a few things that are very interesting.


Surely more than one will criticize Skoda's decision to rebrand the same type of car in three different brands, using designs with a limited personality. Are we criticizing something that works? You don't get to number 1 global manufacturer by making mistakes of that caliber. Who it doesn't work for is the one who has to change designs completely from one generation to the next.

The Skoda Karoq has everything it needs to succeed. It is placed in the segment golosísimo Nissan Qashqai (C SUV), has all the necessary black plastics to defend against who knows what in urban areas, although it has a package of lower protections that will interest more to those who do go to stain it outside urban and peri-urban areas. It has reasonably powerful engines and a competitive price (you'll get it, it's a Skoda). The Ateca is a success at SEAT, and the Karoq will be a success at Skoda.

The VAG Group does no more and no less than what its customers, or rather the segment's customers, ask it to do. Nissan is finding it increasingly difficult to maintain the positioning of the Qashqai as it is, because it started with almost no competition and now has competitors in almost all generalist brands. Skoda needed SUVs, and then there are two cups. The Yeti disappears, in a way, the Karoq replaces it.


Full details of the marketing of the Karoq will be known later. We leave you with the video of the presentation in rigorous deferred:

add a comment of Skoda unveils the Karoq, its new SUV