Earlier this month, the Maranello-based company announced its intention to auction a unique LaFerrari Aperta on Saturday 9 September to mark the 70th anniversary of its founding. With the collaboration of RM Sotheby's, the auction would take place during the "Leggenda e Passione" event to be held at Ferrari's Fiorano circuit. Participation in the event required a special invitation and the proceeds would go to the Save the Children charity. The event was a success.

If the Ferrari LaFerrari Aperta is already a special series, the one that has been auctioned is unique: metallic Rosso Fuoco colour with a double metallic Bianco Italia stripe on the bonnet and at the rear, with black Alcantara and glossy black carbon fibre interiors and leather seats with red stitching. The mechanical characteristics of the Ferrari hybrid spider have not changed, maintaining the combination of the 6.3-liter V12 and hybrid propulsion, which give the model 950 hp. 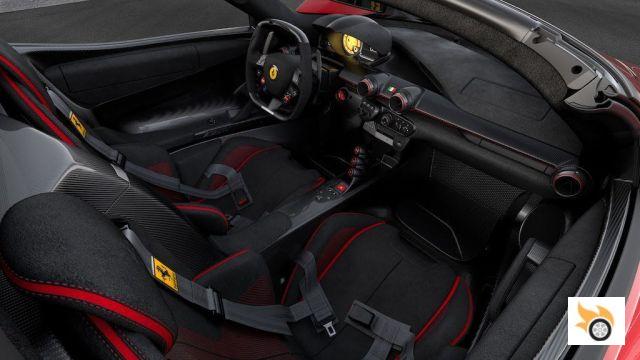 The combination of unique specimen and special occasion has been reflected in the astronomical asking price mentioned at the beginning. This amount far exceeds the previous record of 7 million dollars paid for another exceptional example of the same brand, destined to raise funds for the victims of the earthquake in central Italy last year.

The fact has even more merit if we take into account that other such exclusive jewels were sold at the same auction, such as a Ferrari 250 GT SWB California (sold for 7.9 million euros), a 1958 Ferrari 250 GT Cabriolet (4.7 million euros) and another rarity in the form of an aluminium 365 GTB/4 found in a haystack in Japan (1.8 million euros).

Considering that the price of a "normal" LaFerrari Aperta is around 1.5 million dollars, the value achieved in this auction is one more icing on the cake of the Prancing Horse's prestige, a reference for the owners of the peculiar Italian convertible, and a considerable financial injection for Save the Children, which will be destined to an international education program for the most disadvantaged.


As for the buyer's "clumsiness", you know how kids with money are: not only do they have it, but they want it to be known. The high view of the destiny of this small fortune compensates for the folly.