The version prior to this restyling, presented in 2013, was already one of the most technologically advanced vehicles on the planet, and now with this redesign new elements are added to not lag behind in this battle with its competitors, many of the new elements we have already seen in the latest version of the Mercedes-Benz E-Class.

The mechanical range is new. We have a six-cylinder diesel engine in two versions of 286 hp (S 350d) and 340 hp (S 400d) and a petrol engine with eight cylinders in V, also in two power levels, S 560 with 469 hp and AMG S 63 with 612 hp. All the above-mentioned versions come as standard with the 4MATIC all-wheel drive system. The V8 versions have a system that disconnects half of the cylinders when the power demand is low, in order to save fuel. It's not a new system, far from it, and it's fitted in much smaller and cheaper cars like the SEAT Leon 1.4 TSI ACT 150bhp. The AMG S 65 4MATIC V12 AMG version remains unchanged. There will also be a new petrol version of access to range that replaces the 333 hp S 400 act. Of this version we only know for now that it will have six cylinders. 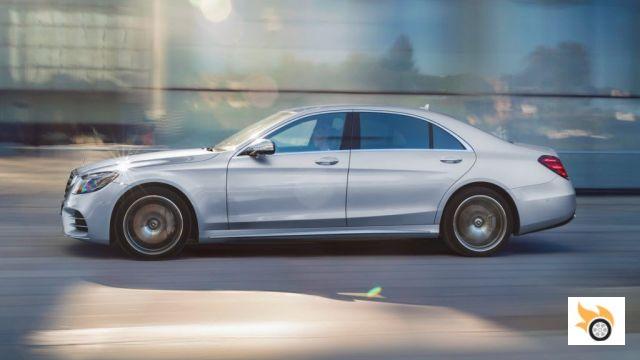 The plug-in hybrid version, which replaces the S 500e, will have a range in all-electric mode of 50 km and is accompanied by a six-cylinder petrol engine. It has an alternator that can function as a starter motor and electric compressor supercharger, which will work with a 48 V electrical system that receives power from a battery with a capacity of 13.3 kWh. Charging can be done with a charger whose output is 7.2 kW.


In the exterior design, as is often the case in the restyling, the changes are very subtle. At the front the headlights change slightly, now more reminiscent of the E-Class, and has incorporated a new grille. The six and eight-cylinder versions have three pairs of horizontal and one vertical chrome lines, and the rest of the grille has a glossy black finish. For long-wheelbase versions and V12 engines, vertical lines in chrome finish are added.

The interior also has very slight changes, which are reduced to a new design of the steering wheel and some new equipment items. The screen has the same size as in the previous version, which is very generous at 12.3 inches, one of the largest on the market and allows you to choose different backgrounds for the instrumentation called Sport, Classic and Progressive. These elements we have already seen in the Mercedes-Benz E-Class. 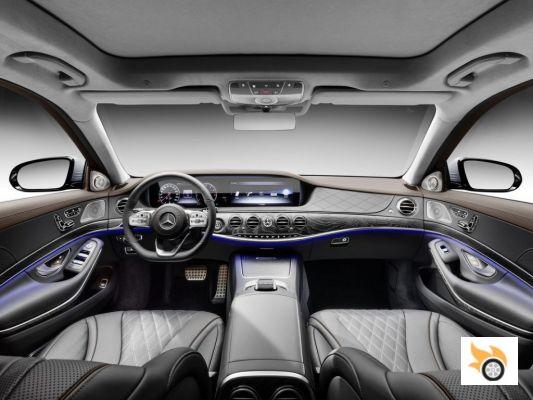 It incorporates a system with which we can select six modes of environment for the interior of the car and that modifies parameters such as the climate control system, including the fragrance, the massage of the seats or ambient lighting, which allows you to choose from a range of 64 different colors. The six programs that can be selected are: Freshness, Warmth, Vitality, Joy, Comfort and Training. These programs remain active for 10 minutes.

Some of the driver assistance systems have new functions. The adaptive cruise control is now able to adapt the speed around bends and junctions using data from the navigation system. Lane Keeping Assist has also been improved, which acts on the steering wheel more smoothly and does not require the lines of the road to be perfectly defined when driving at speeds of less than 130 km/h (80 mph). In the event that the car detects that the driver takes no action for an extended period of time, it activates Active emergency Stop Assist, which brings the car to a safe stop, activates the direction indicators and calls the emergency services.


The Traffic Jam Assist has also been improved and is now able to operate autonomously for up to 30 seconds, after which it will require driver intervention. The system, which consists of a camera that detects bumps in the road and adapts the suspension, previously worked only up to 130 km/h and now goes up to 180 km/h. In addition, the brand assures that it works in more adverse lighting conditions than before. 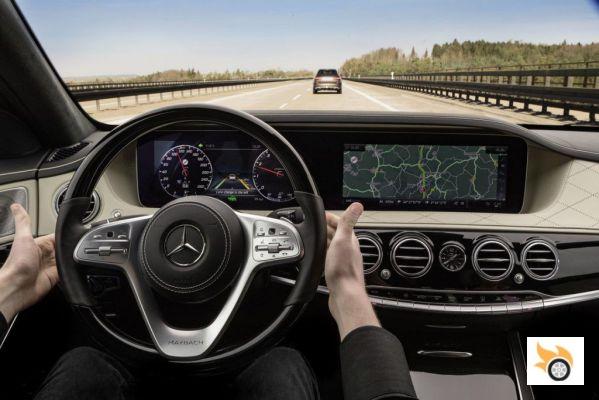 The MULTIBEAM LED matrix headlights with ULTRA RANGE beam are an improvement in lighting over the previous version and can offer an illumination of more than one lux at a distance of 650 meters. It is a modern technology, but in this respect it is surpassed by the BMW 7 Series, which is equipped with a laser lighting system, a more modern technology.

We found a new system - Active Lane Change Assist - which is capable of overtaking on roads with more than one lane in each direction automatically whose activation requires the activation of the turn signal, after which the vehicle will analyze for 10 seconds if the overtaking can be done safely. If after this time it has not been possible to overtake, we will have to activate it again.


It is equipped with a system called CURVE, which is able to tilt the body of the vehicle up to a maximum angle of 2.65 degrees towards the inside of the curve to improve the stability of the vehicle. This system was previously available in the Coupé version, but not in the saloon. Another new system is the Remote Parking Assist that allows us to park the car from the outside. The maximum distance that the vehicle can travel in this way is 15 meters and the trajectory must be straight. This system was already equipped in the BMW 7 Series and the 2016 E-Class. 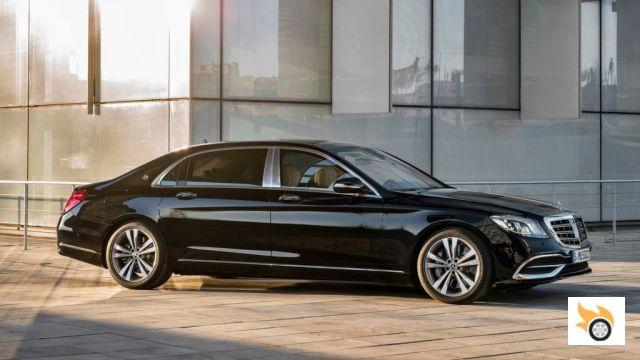 In all other respects, the Mercedes-Benz S-Class is the same as the previous version that began marketing in 2013. At the moment we do not know the price rates of the restyling, although logic indicates that they should not vary too much from the prices of the current version.

add a comment of Mercedes S-Class 2017, renewed and closer to perfection