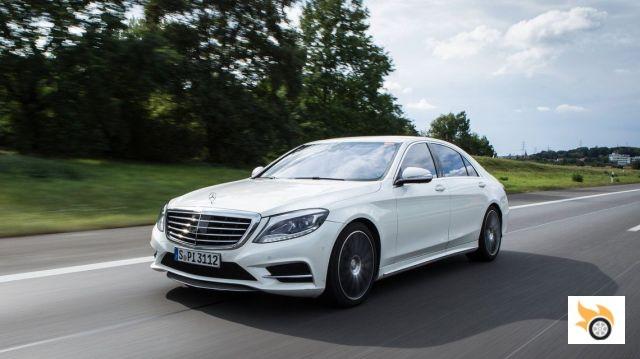 Like BMW, Mercedes-Benz has sought to maximize the similarities between different engines to save costs, only the three-cylinder engines are not part of the plan. Not only that, semi-hybrid components have been added to reduce the consumption of some engines and reduce emissions, without adversely affecting other factors.

The crux of the matter is the 48-volt electrical system, which allows higher-demand consumers to be used, while increasing energy regeneration. No large or heavy batteries are used, so the weight penalty is minimal. Audi has already put a 48-volt system into production.

The inline six is back

The new inline six-cylinder gasoline engines are longer than the V6, but they have the advantage of leaving room on the sides for the anti-pollution systems. The M256 engine contains an electric motor integrated into the transmission, which acts as an alternator and starter motor, and is also capable of temporarily propelling the car at low speeds.

The air conditioning, water pump and electric turbocharger do not rely on the accessory belt, they are electric, and in fact there is no accessory belt. The electric turbo (called eZV) eliminates turbo-lag, accelerating to 70,000 RPM in a matter of 300 milliseconds. At the top of the tachometer a higher inertia turbo is responsible for blowing the cylinders the air they need.

The first model to mount it will be the S-Class, the C and E may receive it in the restyling.

According to Mercedes, a performance worthy of a V8 is achieved (more than 400 hp and 500 Nm of maximum torque) but with the consumption of a smaller engine, 15% less than the outgoing V6. It is a compact engine in length and width, with the space more optimized. In addition, it is simpler and the probability of failure we can even throw it down.

The new engine has series turbocharging (asymmetric turbos), variable valve lift (CAMTRONIC, very rare in a diesel), aluminum block, steel pistons and optimized liners. As on the petrol M256, the anti-pollution systems are located very close to the engine and work in warmer conditions, contributing to lower emissions.

For the petrol engine there are no semi-hybrid functions, nor is a 48-volt electrical system detailed. Nor is it mentioned in detail how anti-pollution systems work, although it is more than likely to use urea to neutralize nitrogen oxides. Remember that in Euro 6c is homologated considering actual emissions, not just the laboratory.

With more conventional architectures will come the new M176 eight-cylinder and four-cylinder M264. In the first case we have an engine that produces more than 476 hp with a maximum torque of about 700 Nm at 2,000 RPM. It uses 10% less power than the previous 455 hp engine, and will also be used for the first time in the S-Class. The turbochargers are housed inside the V, between the cylinder banks. It is capable of neutralizing four cylinders at low load to consume less.


The four-cylinder engine will have a specific power output of 136 bhp/litre. The alternator/starter assembly is replaced by a single belt-driven electric machine. It acts as a starter, recovers energy (up to 12.5 kW), pushes the engine up to 2,500 RPM, generates power... Yes, it's a semi-hybrid, and can run in zero-emission mode in some circumstances. The water pump is electric and runs on 48 volts.


The gasoline engines will include particulate filters to comply with regulations, starting with the M256 and M176 (L6 and V8, respectively), with the M264 coming later. Right now Mercedes is testing all these engines, but it won't be long before they go into series production.