Audi Q8 Concept, the prologue of the next SUV four rings

It is a mammoth 5.02 meters long, 3 meters long, 2.04 meters wide and 1.70 meters high. It almost has the dimensions of a SsangYong Rodius, but the prototype is a four-seater with a trunk that reaches 630 liters. Whether we like it or not, the model based on it will sell well, it has what an E-segment customer demands, but with a slightly more dynamic and less clunky styling. Although it seems raised as a tourism, which will not go just off the road, has a gray stripe that runs along the bottom line, instead of the typical black of the SUV. Audi says it's aluminum, not painted plastic.

The designers have been inspired by the legendary Audi Quattro eighties, look at the tailgate, high wheel arches and thick sloping C-pillar.

What's new? You have to look at the front grille, which receives a vertical stripes, as well as in the optical groups of floating appearance. Replacing them when they get damaged or someone breaks them will be a lot of fun when it comes to seeing the bill, but modern design is like that. As well as being cool, they're functional, they're laser and will provide a much improved visual experience when driving at night. The light is divided into 1 megapixel, i.e. one million pixels, so you can light up as much as possible without dazzling others. 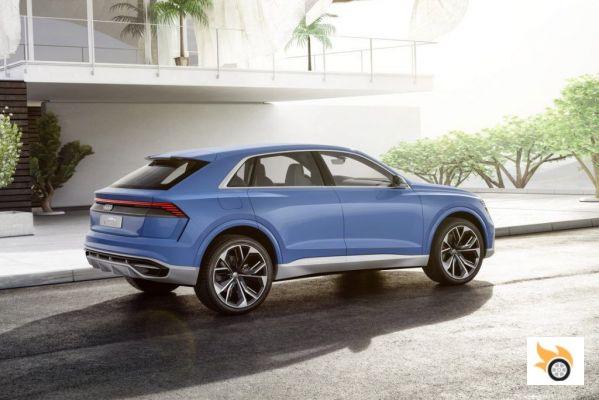 The roof line wants to be sporty and low, without affecting the habitability in any place. The door frames have been eliminated, as in real coupés, the proportions are not very forced. And what about the handles to open the doors? They have been removed, the opening will be done by passing the hand where they used to be. The mirrors are very conventional for a prototype.


Although it is a plug-in hybrid and - it is assumed - efficient, it has some air intakes surely oversized for the vain. Inside the 23-inch mega wheels are 20-inch carbon-ceramic brakes, which two tons of bug won't stop on their own. You should also look at the engine's air intake, just above the grille, which provides plenty of air (and fresh) for the big six-cylinder.

Audi combines technologies already seen in other models with this design, as the heat engine (3.0 V6 TFSI 333 hp) or the electric motor solution integrated into the transmission. The all-wheel drive is conventional, by driveshaft, when there are several models that dispense with this solution and have an electric rear axle that provides all-wheel drive, see the Lexus RX. Audi opts for a more proven solution. To improve the mobility in the curves resorts to electronic differentials, ie, the ceramic brakes will work to stop the car intelligently and thus is - paradoxically - faster. 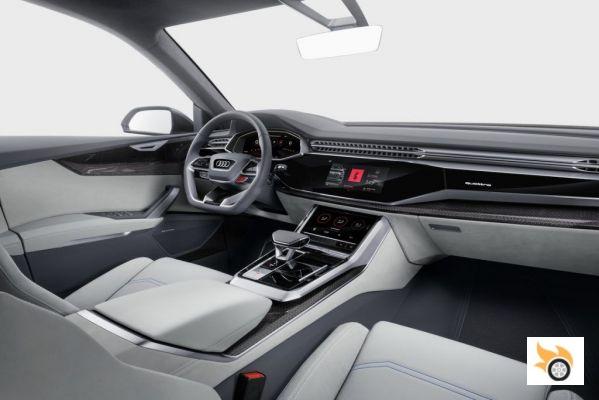 The driving position has a HUD that represents the most important information so that it is seen with maximum clarity, already entering the field of augmented reality, and has the latest generation Virtual Cockpit dashboard, more evolved than the current Q7 (it was released last year, it is not from the stone age). The instrumentation is fully customizable and in high resolution, practically HD (1920×720).

The dashboard is really cleverly shaped, with a black stripe running from side to side, where there are no buttons that make relief, all smooth, like a ceramic hob. The central multifunction display is perfectly integrated. Below this, and in front of the gear lever, there is another screen that can be comfortably manipulated by resting your wrist on the same lever.


This last detail of coherence, as in a "sailing boat" according to the dossier, since it also steers a boat, albeit a land boat.

More than one will look like a spaceship, but in reality this reinterpretation of the interior once you get used to it, it will be difficult to return to a more usual model. Already in the current Q7 this aspect is very successful. In terms of materials we have variety, a mixture of Nappa leather and Nubuk, brushed finishes, steel gray, glossy carbon, etc.. In the central part it has a central "floating" screen between both seats to touch, among other things, the climate control.

Let's move on to the more mechanical part of the Q8 Concept. The hybrid system delivers a combined power of 449 hp and a maximum torque of 700 Nm, more than enough for almost two tons. It accelerates to 100 km/h in just 5.4 seconds, with a claimed top speed of 250 km/h. Considering the ultra-optimistic system by which plug-in hybrids are homologated, it only uses 2.3 l/100 km... for a little while.

The 100% electric part consists of a 136 hp and 330 Nm engine, like a two-litre diesel of a few years ago, more than enough to drive at low speeds. With 17.9 kWh batteries, it can travel around 60 kilometres, about the same as the first-generation Chevrolet Volt/Opel Ampera. With a charging capacity of 7.2 kW, it can be charged in just two and a half hours. Combining batteries and a full tank, Audi claims that it will exceed 1,000 kilometers at a stretch, without recharging the batteries more times.


Like other plug-in hybrids, you can choose the pure electric mode, the automatic hybrid, or recharge batteries based on gasoline to then roll without emissions.

It has an adaptive and sporty suspension, with continuous damping control, which allows two body heights, the normal one and another 90 mm higher. In this way you can go closer to the ground or leave more room between the underbody, depending on the circumstances. Such circumstances, if they are off-road, the dossier omits them completely. 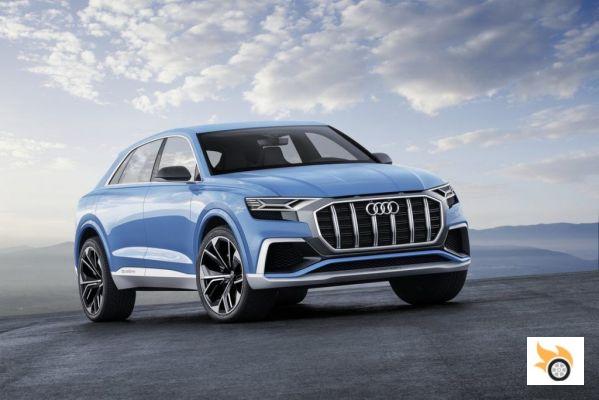 In short, Audi already has practically ready this model, as the prototype is very close to what will be the series production model. The new generations of HUD or dashboard should be coming to other models progressively. The Audi Q8, if it's going to be called that, will be on sale next year.

add a comment of Audi Q8 Concept, the prologue of the next SUV four rings