Since the market hasn't completely abandoned the sedan body, Honda has made a smart move by adding the new Civic four-door to the lineup. For those looking for a compact SUV, the Japanese already have the HR-V and CR-V.

Interestingly, the sedan won't be coming to the UK. This will be the only European country that will not receive this version.

The two versions of the Honda Civic are so precisely tailored to the market that, two different bodystyles (sedan and hatchback) of the same model, target two different groups. Honda estimates that the target audience for the five-door body will be a "modern" male under 45 years of age. The four-door model, in turn, is aimed at a slightly older generation of people. The Japanese brand claims that this version will be the most sought after by the most loyal customers, those who have been with Honda for several years. 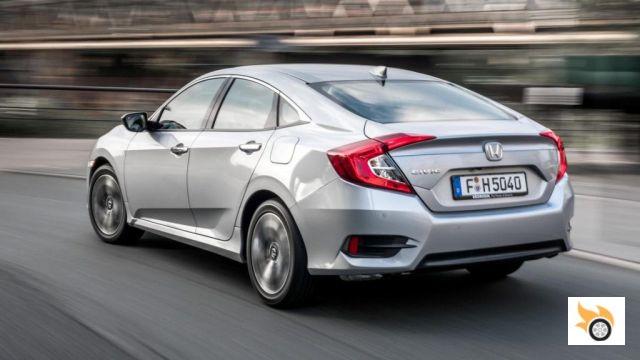 The four-door Civic will be offered in several versions and various mechanical. The most important and innovative is the 1.5-liter Turbo V-TEC engine, with up to 182 hp. This engine replaces the 1.8 naturally aspirated (i-VTEC). Depending on the gearbox chosen, torque can be 240 Nm for the six-speed manual gearbox, or 220 Nm if you opt for the CVT continuously variable automatic gearbox. Diesel engines and a nine-speed torque converter automatic gearbox are expected to arrive in the coming months.

Compared to the previous generation, Honda has managed to save 16 kg and obtain 52% more torsional rigidity. That, combined with an unladen weight (with a full tank) of between 1,279kg and 1,348kg, and driver-focused tuning, will make the Civic an entertaining car, not just a washing machine on wheels that gets you from point A to point B.


Compared to the five-door version, it is 15 centimetres longer, 3 centimetres lower and has a 99-litre larger boot. Wheelbase and width remain the same (2.69 m and 1.8 m respectively).

Interior space promises to be segment-leading both in terms of space and ease of access and versatility. It features a 519-liter cargo capacity and 60:40 split-folding rear seats, plus a low load opening height and a flat floor that will help carry heavy, wide and long items.

The Civic Sedan will offer the same technologies and safety systems that the five-door version already has. These include, for example, the second-generation Honda Connect connectivity and infotainment system, which offers improved intuitive operation and full smartphone integration via Apple CarPlay and Android Auto.

This version is now available to order from dealers and initially the range will comprise a total of three trim levels: Comfort, Elegance and Executive. The range is structured as follows: