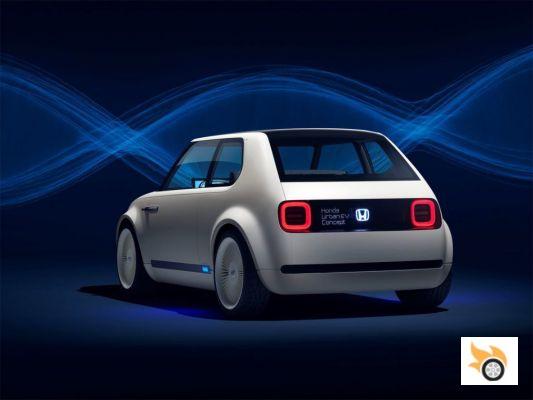 The Honda EV Urban Concept is 100 mm shorter than the Honda Jazz, so it will stand at around 3.9 metres, larger than the early 1970s Civic. Being all-electric, it can play with classic proportions while maintaining an adequate level of occupant protection. On the other hand, the Urban EV Concept relies on cameras instead of mirrors, with the classic Japanese model having the typical fender mirrors on the wings. The charging socket is located on the bonnet.

It's also curious that in such a contemporary design the headlights hardly reach the A-pillar, which by the way, is quite thin for visibility. The headlights are embedded in the front end and stay there, with a backlit Honda logo in blue - several manufacturers are doing this for hybrids or electrics - and the ability to convey visual messages to pedestrians or other vehicles.

Surely the production model will look a lot like this neo-retro-Civic?

Honda won't tell us anything about its electric motor or battery capacity. We have to go back 20 years to remember the only electric car that Honda had brought out, the EV Plus, and by legal imperative of California. What we do know is that it will be equipped with a kind of emotional intelligence to assist the driver depending on how he or she is feeling. Let them explain how.

On the other hand, Honda explains that it will have the ability to communicate with the electric grid in an intelligent way. Honda calls it Power Manager, but has not invented anything, this technology already exists and allows the car in addition to recharge can return energy to the network at times of high demand -recompensating the owner- or in case of blackout to power the home. This technology is called Vehicle to grid (V2G).


What else can be said about the prototype? That the doors open in a suicidal way, in the opposite direction, and that it has four seats and two bench seats, the kind that won't grab anything when cornering. The seat belts are integrated into the seats themselves, as they are in vans. The interior is presided over by a large central console, with just enough controls and a panoramic screen. Beyond the wooden details, it doesn't look like a car of great ambitions.