This concept is powered by four electric motors - one for each wheel - that deliver a combined power of 750 hp. They receive energy through a battery pack capable of achieving 500 km of autonomy according to the misleading NEDC cycle. To be somewhat more realistic, we must say that in the EPA cycle it would have managed to homologate a range of just over 200 miles -320 km approximately-. It is worth noting the availability of a fast charging system of 350 kW of power (which are very big words, almost triple the Tesla superchargers) capable of providing 100 km of range in just 5 minutes. Such fast chargers do not exist on public roads today.

With this propulsion system the vehicle is able to accelerate from 0 to 100 km/h in less than 4 seconds. 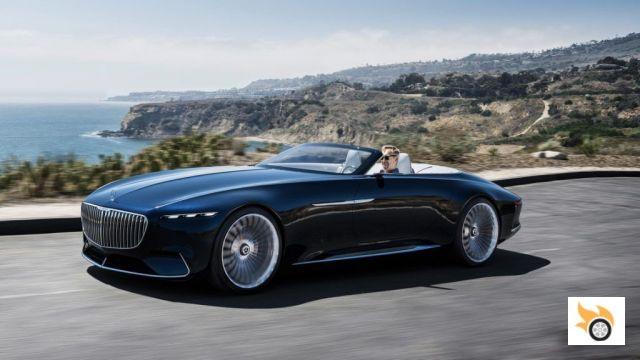 The exterior image of this vehicle impresses at first glance, with a length close to 6 meters -5.70 meters-, a width of 2.10 and a height of 1.34 meters. The prototype cabrio has replaced the gull-wing doors of the closed version with a canvas hood, which together with the presence of chrome throughout the exterior of the vehicle provide an elegant presence. We have also been able to see some 24-inch wheels that, in the case that they were taken to reality, would confirm that the designers have gone completely off the ball on the issue of wheel size.

If we move on to the interior, with two seats only, we'll be just as impressed, if not more, than with the exterior. We find an interior with white nappa leather and a floor finished in open-pore wood combined with aluminum trim. The upholstery of the interior is made using a quilting technique in the form of diamonds and subject with illuminated buttons in blue and the star of the brand inside, a type of finish called capitonné, also used in some types of sofa as the chester. A very striking detail of the interior is that in the center console we have in sight some fiber optic cables that are illuminated in blue and simulate the flow of electric current from the engine.


The brand claims that the car is inspired by luxury yachts, it is the closest thing to a road yacht.

Nor has the brand skimped on technology, incorporating sensors capable of monitoring the state of health and mood of those traveling in this vehicle, in case money does not give them happiness. Also noteworthy is the presence of two head-up displays. The dashboard is not fully digital as in many models that are already on sale, but combines analog and digital elements.


At the moment we can not confirm if this prototype, like the closed version presented last year, can become a real model, but what is certain is that if so it would become a reference of the most extreme luxury, with permission of Rolls-Royce.

add a comment of Vision Mercedes-Maybach 6 Cabriolet, a new interpretation of open-air luxury.