The seventh generation, introduced in 2012, has almost fulfilled its life cycle (yes, every year that passes people get bored before and products are renewed before) given the huge volume of sales it has. With this revision, the new Golf aims to remain the compact reference against domestic rivals like the Opel Astra, or French as the Renault Megane, both bestsellers at European level. The update affects the three-door and five-door bodies, as well as the family Variant. At the moment, the Golf Sportvan minivan does not incorporate the changes.

We will have to wait until next year to meet the eighth generation.

As usual in the brand, we do not find a revolution in its design, but an evolution, following in the footsteps of his contemporaries Seat Leon and Audi A3. Among the revised details, the full LED headlights (with interactive turn signals in the highest versions of the range), which continue to maintain that chrome line (or colored, depending on version) that extends from the grille. Details such as the fenders -larger- with a new integration of fog lights, a new rear diffuser, exhaust outlets, and an updated design for the rear lights, are also new in the Golf 2017. There will also be new sets of wheels and paint finishes for the bodywork.

The interior is perhaps the place where we can see the biggest differences. The analog dashboard is replaced the Active Info Display, which is nothing more than a 12.3-inch screen as equipped with the most modern Audi models. As standard, in the central console will find a screen of 6.5 "but you can opt for a 9.2", called Discover Pro, with functions that can be controlled by gestures. For example: to move from one song to the next or the previous one, simply wave your hand in the air to the right or left. Similarly, you can change stations or music playlists. This system will be incorporated gradually to other models of the brand and is reminiscent of that presented in the BMW 7 Series. 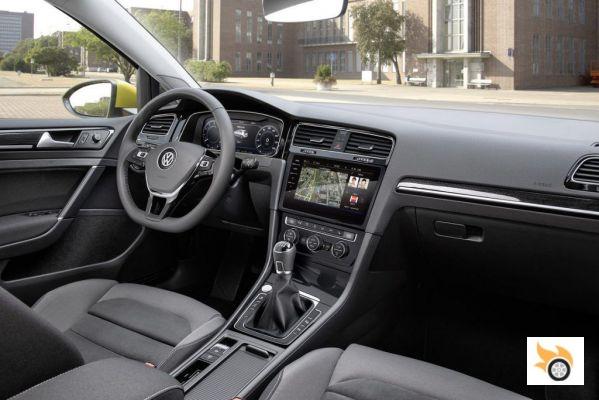 It also highlights the new online support service, in addition to the different applications that will be compatible for both Android and iOS devices.

Other technologies that stand out in the renewed Golf is the proactive occupant protection system "PreCrash", smart key that allows you to customize certain features depending on the user who drives it, "Front Assist" system, parking assistance, new ambient lighting or blind spot alert with assistant at the exit of the parking lots.

But what is most striking is what refers to the semi-autonomous driving. The Volkswagen Golf 2017 will feature the "Traffic Jam Assist" system, which ensures that the vehicle can accelerate, brake, and even turn, at low speed, in very crowded traffic situations.

As far as mechanics are concerned, it highlights the incorporation of the new 1.5 TSI EVO petrol block of 150 hp and active cylinder management. This means that the engine is able to perform a complete shutdown while you stop accelerating, being more efficient. According to Volkswagen, this system can save up to 1 litre per 100 km. Also, of this variant, there will be a "BlueMotion" with 130 hp. The more racy versions of the Golf will enjoy an increase in power. The GTI will offer 230 hp performance while the Perfomance will reach 245 hp. The R, like the Seat Leon Cupra, will also have an increase of 10 hp now going to 310 hp. It also incorporates the DSG automatic transmission with seven ratios, which will gradually replace the six, for the TDI engine over 150 hp and TSI over 245 hp.

Velántur shows us its prototype of a 100% Spanish electric sports car. ❯