How much does it cost to rebuild the engine head? How do you save? 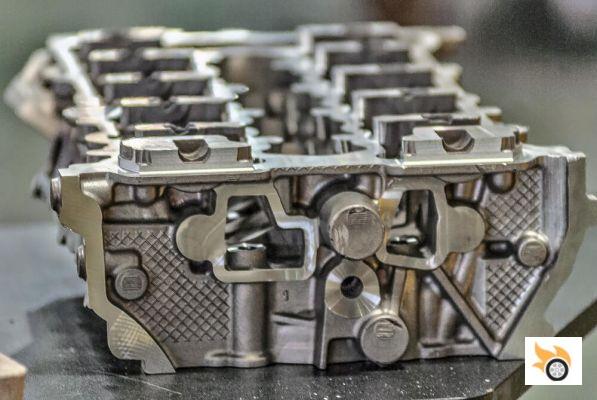 What is the engine head?

The engine head seals the cylinders with the pistons and the engine oil and coolant circuits inside. In this way the combustion gases generate sufficient pressure to push the cylinders. Simultaneously, the coolant and oil perform their respective functions of lowering the temperature and lubricating the mechanical parts of the engine.

How much does it cost to rebuild the engine head?

Before determining how much it costs to rebuild the engine head, first remember that it is one of the most expensive car maintenance jobs. This is because in addition to the already high cost of replacement parts we have to add many hours of work by the mechanics needed to do the job accurately.

In analyzing how much it costs to redo the engine head, we have two main costs: labor and parts. Labor can vary between 250 and 650 euros. The cost of spare parts varies between 650 and 950 euros. Logically, these costs can vary a lot depending on where you are going to do the replacement.

Independent garages offer significant advantages, including huge cost savings, but it can be difficult to find an operator you can fully trust. Authorised garages may be more reliable, but will likely pay a lot more for the procedure, up to 40-50% more.


Changing a dead battery is something every mechanic can do. Replacing a cylinder head and resynchronizing all the internal components is much more complex, so trust a mechanic who knows what he's doing, not the one with the lowest budget.

When do we have to redo the engine head?

The engine head has to be rebuilt in the event that the component itself becomes cracked or damaged. While it is really unusual for wear alone to damage the cylinder head to the point that it needs to be replaced, it is useful to remember a couple of things about the engine head.

The engine head acts as a "cap" on the engine block inside of which there are continuously controlled explosions of fuel that, by moving the cylinders, move the whole machine. After many miles and several years of use and with the help of poor maintenance, the engine head can become damaged enough to allow combustion gas, engine oil or coolant to escape.

At this point, replacement becomes necessary if you want to continue using the car without destroying the internal parts of the engine or due to overheating or excessive stress and inefficiency.

Whenever one of the symptoms of a burnt head gasket is present, the condition of the engine head should be checked. In this way, if damage is found, it would be advisable to replace this component, avoiding having to make another intervention later.

Is it better to redo the engine head?

After knowing how much it costs to redo the engine head, many people wonder if it is convenient to pay for such a costly intervention or if it is better to change the car. There is no definite answer to this dilemma and it depends entirely on the overall condition of the car and your plans.


If the car that needs to be rebuilt has only a few kilometres on it and has no other apparent problems, then it may be wise to rebuild the engine head. If, on the other hand, the car is already very old and, when the engine is opened up, other problems are likely to arise, it may be better to scrap the car and get a new one.


This is purely pragmatic reasoning, as it is not possible to quantify the emotional value of the car, its historical value or the budget available for another car for the driver.

How can you save money on an engine head refurbishment?

As we've seen before, redoing the engine head can be one of the most expensive maintenance operations. It requires many hours of mechanical work and hundreds of euros in spare parts.

However, you can save on spare parts by choosing a reconditioned engine head instead of a new one. In this case, you choose a cylinder head that has been removed from another car, inspected by a specialist technician and returned as new.

The savings obtained with a reconditioned cylinder head can be considerable, in the order of several hundred euros depending on the model. In addition, with a reconditioned part, you can shorten the intervention time, as it is available from a parts distributor in your network of mechanics.

We remind you that if the intervention is carried out in accordance with the regulations and with a regular receipt, the reconditioned spare part will be covered by the 24-month warranty typical of every new spare part.

add a comment of How much does it cost to rebuild the engine head? How do you save?