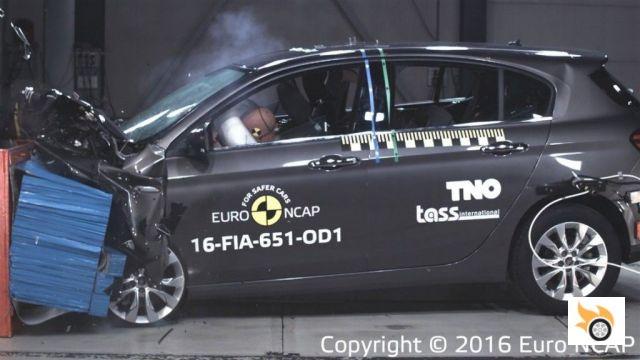 This does not mean that it has the safety of the Fiat Stilo, nor that it is more unsafe than the Fiat Bravo. The ratings make sense within the same year, because the criteria are not the same. It would possibly have scored four or five stars in the era of its predecessors. Active safety equipment plays an increasingly important role in getting a fourth or fifth star.

With the automatic braking system with front radar (what EuroNCAP calls Autonomous Emergency Braking) the Tipo scores in line with similar models. It scores 82% in adult protection, 60% in child protection and 62% in pedestrian protection. The basic equipment adds up to 25% in safety technologies, the full equipment reaches 57%.

The Citroën C-Elysee and Peugeot 301, with a similar scoring system, got three stars. The comparison with Skoda Rapid or SEAT Toledo is less fortunate, because they got five stars, but with the scale of four years ago. The Renault Mégane itself went from being a five star (leader in its segment) to a mere three stars just because of the changes in the protocol. Renault made minimal changes to get to four stars, until the replacement arrived, which already gets five.