But of course, the people at Renault had become accustomed to having the record in their hands and had to give a blow to the table in terms of publicity. So the same Laurent Hurgon was called back a few months later with the mission to beat the record of the Leon. He does so with a time of 7'54"36 at the wheel of a Mégane RS Trophy-R. And he is still the fastest front-wheel drive car at the 'Ring. Yes, the Civic Type R atomizes the time of the two European compacts with a time of 7'50"63, but it did it with a development prototype of the car. Until Honda or Horst von Saurma (director of Sport Auto) do a lap with a production car, the Mégane RS Trophy-R will continue to be considered the fastest.

Yes, it's playing with concepts because compared to a SEAT Leon Pack Performance or a Mégane Trophy, the Mégane RS Trophy-R isn't exactly a production car. Ok, it's a limited edition of 250 units for the world (and they've allocated only 6 units for Spain, including the press one you see in the pictures), but it's not a car that shies away from compromises. 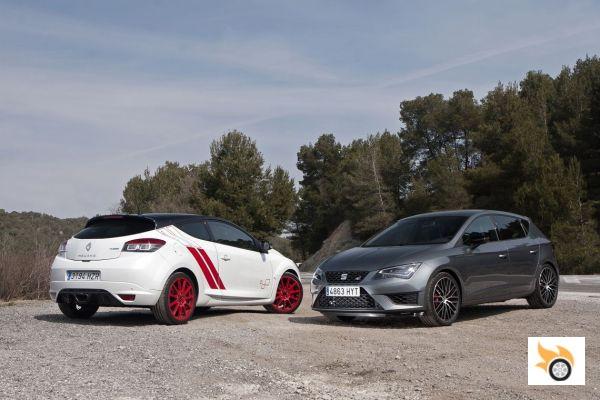 The R of the Trophy-R, which stands out with its specific livery, "Trophy-R" decals and red 19-inch wheels, means radical. Indeed, the car looks more like a racing car with license plates than one of the best-selling compacts in Spain. Starting from the Trophy version of the Mégane RS - which is fitted as standard with a self-locking system - the car is lighter by 101 kg thanks to the Recaro seats with polycarbonate casing (-22 kg), the Akrapovic titanium exhaust (-4 kg), the Speedline wheels (-5 kg), the brake discs with aluminium brackets (-3 kg) and the eliminated rear seats (-20 kg), without forgetting a lot of eliminated acoustic insulation (-18 kg) as well as some eliminated comfort equipment (-10 kg) and the adoption of front springs in composite materials (-2 kg). You can't do the maths? Well, the optional lithium-ion battery is missing, which eliminates another 16 kg. Speaking of options, the test unit has climate control and a normal battery, the lithium-ion battery can only be ordered as an accessory at the dealership, as well as harnesses (ours had red belts).


Renault Sport removed more than 100 kg from the Mégane RS Trophy to lower the lap time. The Cupra retains all its equipment.

Compared to the Cupra's Performance Pack, Renault Sport's performance pack is perplexing. The Cupra Performance Pack (2,720 euros) "makes do" with 18-inch Brembo brake discs with 4-piston calipers (actually, it's the system from the Audi TT-RS), 19-inch wheels with the same tyres as the Trophy-R, the Michelin Pilot Sport Cup2. In the end, with the Performance Pack, the weight saving is only 8 kg compared to a standard Cupra. And aesthetically the car is not very different either: the 19-inch wheels are specific and the "cupra" of the trunk is black. On board, there's nothing special, although our car was fitted with the optional heated half seats (1,220 euros). 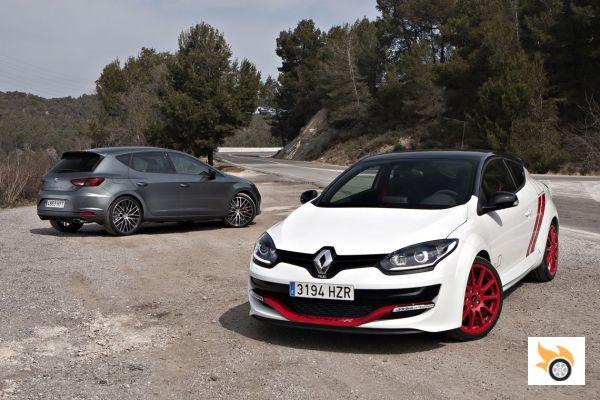 When the Trophy-R appeared, many thought about what would happen if SEAT dared to make a similar version. If they want to beat the record, it's not so far-fetched. Jordi Gené explained in an interview that, on the Nordschleife, for every 10 kg you remove you can gain 1 second per lap. However, SEAT's managers don't see enough market for a car with these characteristics. Shall we forget about it, then? Maybe not. Jaime Puig, director of SEAT Sport, reminded the media that SEAT gives priority to multi-purpose cars that can be used on a daily basis, while at the same time not completely ruling it out: "it's still very early days". Personally, such a version would make sense towards the end of the Leon's commercial life, to give it a final push; we are still far from that end in the case of the Leon.


Mechanically, the Trophy-R retains the same 2.0 litre turbo as the other Mégane RS. Thierry Landreau, technical director of Renault Sport, acknowledged that they had reached the limits of development of this engine. They couldn't get much more power out of it than they were already getting out of it without compromising its reliability. That's why they had to make do with the 275 hp of the Trophy. To compensate for this power deficit, they raised the maximum engine speed to 6,800 rpm in the first two gears and adopted a new setting for the suspensions. Thus, the Trophy-R is fitted with Öhlins Road&Track shock absorbers adjustable in height (-10 mm when it leaves the factory) and stiffness.

We start with the Trophy-R, a car I've been looking forward to since it came out. In its day, the R26.R had already impressed me with its radicalism (it even had methacrylate rear windows, as it was lighter than the glass of the windows...), the Trophy-R doesn't disappoint me in that sense either. Although when I wake up the engine, it is not as expressive as I had imagined it to be. It sounds loud and fat, but for an Akrapovic engine I expected something else. With the RS button pressed (which gives access to the 275bhp, much more direct engine management in its throttle response and exhaust release) it transforms. Decelerations or lifting your foot off the throttle after a heavy load makes the exhaust sputter, like an MG or a racing Morgan. The smile is inevitable and gives you goosebumps. It's simply magical.


On board, with a perfect driving position -there's nothing like a good trunks- we check how they have effectively loaded a good part of the acoustic insulation. The noise of the engine and its intake, exhaust and tires are very present, but it is not a deafening environment, you can hold a conversation with your co-driver and listen to the radio without having to turn up the volume. The visibility of the instrument cluster is odd, with the clocks tilted backwards; thank goodness there's a digital display so you can see the basic, mandatory information.

After the first accelerations, in which once again we can see that making a car lighter works miracles. The 0 to 100 km/h (62 mph) is done in 6.9 seconds, 1,000 m in 26.2 seconds and 80 to 120 km/h (50 to 120 mph) in 4.4 seconds. Quite a feat, considering that despite the self-locking and the Pilot Sport Cup 2 in temperature, the motoring ability at a standstill is perfectible. More than pure acceleration, the Trophy-R has to put a smile on your face when cornering. And there it is a real delight. The dry handling is flawless and the cornering speed is amazing for a Mégane. Between the very direct and communicative steering and the GKN self-blocking system, you know at all times where the wheels are and what they're doing. This level of communication with the car is what allows you to enter the corners in an orthodox way, if you are looking for perfection in the gesture, or almost any way "if you're more of a rally car", without the car is going to bite you, because you feel everything and you can correct it without difficulty. The rear axle, moreover, is not a ballast that does not obey the front axle; on the contrary. It knows how to be playful when you put the car in the corner entry. Throwing the car into the apex at the last moment and reaccelerating too soon results in the front wheels biting the tarmac with faultless traction and the rear wheel dropping a bit to help you take the corner. Of course, if you go too far, the rear will want to overtake you, but the Trophy-R's balance is such that you can recover it without difficulty. In the faster corners, the Trophy-R loses a bit of its composure, but in the twistier sections it's a real marvel of efficiency. 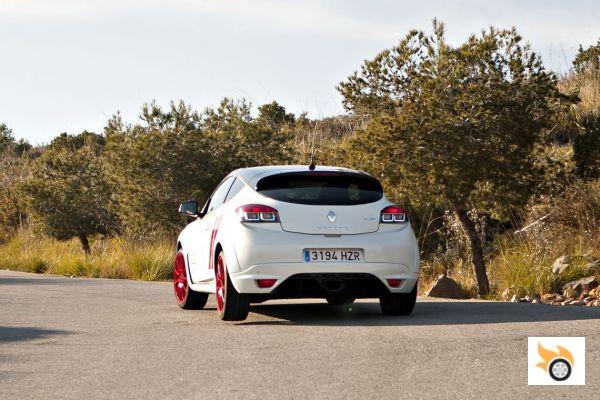 Just look at the corner and the Trophy-R is ready for the apex.

The Leon Cupra Performance Pack is also an extraordinary machine. The problem is that when you get out of the Trophy-R, you feel it's not as incisive, that the steering could have a bit more communication and the engine could be a bit more expressive. However, in reality it's quite the opposite. The Cupra's rear end isn't as playful as the Trophy-R's, but it does help with cornering. The steering is light, but communicative. And when the Trophy-R takes corners like a fighter jet, the Leon knows how to do it too, but with a mind-blowing level of comfort. In the Cupra, changes of direction are made without blinking and with great precision. And while the overall character of the car is dominated by the front end, the rear end is responsive, even in this 5-door version with a longer wheelbase than the 3-door Cupra SC. As for the engine, the delivery of the 2.0-litre VW is impressive and, in the case of this car, combined with the DSG transmission, it delivers impressive times: 0 to 100 km/h in 5.8 seconds, 80 to 120 km/h in 3.8 seconds and 1,000 metres in 25.5 seconds. In a 5-door compact!

I get carried away and forget that they are basically compact, i.e. multi-purpose cars. In this situation there is no color, the Cupra Perf. Pack outperforms the Trophy-R in all aspects. Comfort, habitability, performance, silence on board, smoothness in town, finishes, everything is easier and better in the Cupra. But in the end, the Trophy-R is the one you like, the one that keeps you awake at night. And it's all thanks to its dynamic handling. It's enough to look at the corner for the car to throw itself into the apex. The steering is more communicative than that of the Cupra and a bit more precise. The handling of the Trophy-R is also better, despite the fact that the Cupra is equipped with a VAQ (electronically controlled multi-plate clutch) self-locking differential. 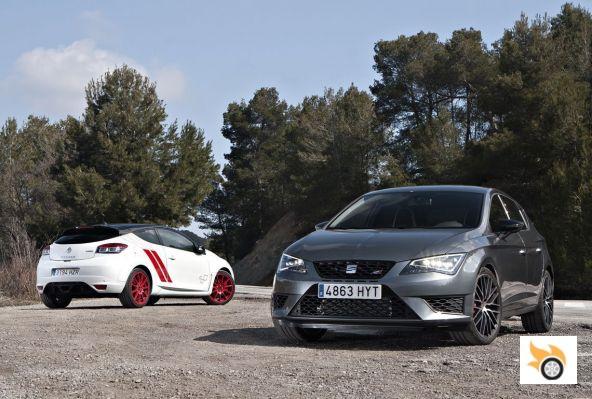 From a pragmatic point of view, the Leon Cupra Perf. Pack beats the Trophy-R to a pulp. It's better finished, more versatile, more comfortable, has more seats, is quicker and is cheaper than the Mégane Trophy-R. From a sporting point of view, the Trophy-R is a pure gem. I'd go so far as to say it's the Ferrari 458 Speciale of front-wheel-drive cars. And of course, that makes you want it and you don't want to let go of the wheel...

A winner? It depends on your criteria and what you're looking for in these cars, but I reckon there's no winner or loser in this peculiar comparison. Both have been the fastest in their category in the 'Ring, which is no mean feat, but it's true that the Trophy-R did it by becoming almost a "racing car", while the Leon did it as a "road car". And even though the Leon Cupra no longer holds the record, it seems to me a more impressive feat than the Trophy-R. 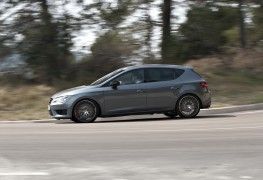