Performance is still perfectly respectable. 0-60 mph is covered in 4 seconds, just a tenth slower than the V12-equipped model. Where there is a little more difference is in top speed, but when you're flirting with 300 km/h (301 km/h to be exact), 20 km/h more or 20 km/h less doesn't make such an overwhelming difference either.

To compensate for the "lack of speed", Aston Martin claims that the tuning of its DB11 V8 is more dynamic. 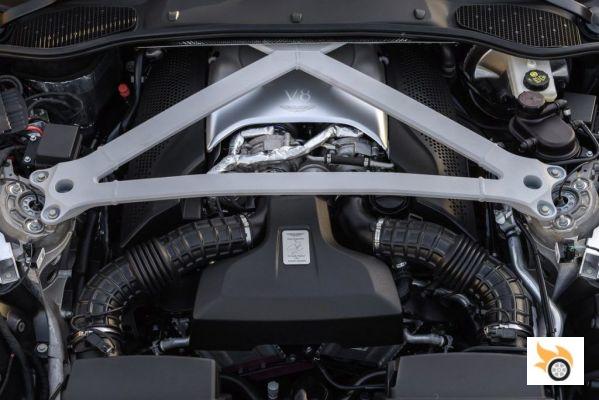 While most of the hardware is pure AMG, Aston Martin says it's equipped with new engine mounts, a bespoke air intake and a proprietary exhaust system. The ECU software has also been written in-house, to achieve a proprietary mapping. The other plus is weight which, despite losing four cylinders along the way, the total saving is 115kg versus the V12 for a curb weight of 1,655kg. As the mass is located lower in the engine bay and closer to the centre of the car, the DB11 should perform better on twisty roads than its bigger twin.

Visual differences are limited to specific 20″ wheels, two air extractors on the bonnet instead of four and blacked-out headlights. Inside, it will feature the same customization options.