Firstly, it weighs just 970kg. That's a massive 80kg saving compared to the last Swift Sport, which already felt quite light. Although the new one is 40mm wider, Suzuki says its new platform is the key to sublime performance. There's something to be said for the improved steel, obviously. Not a bad engine either, now turbocharged.

Yes, pray silently for the latest atmospheric pellet. However, looking at the specs, you'll see that the 1.4 Boosterjet (K14C DITC) engine in the new Swift Sport develops 140bhp, just 4bhp more than before. Fear not, but it doesn't need more power when the instrument cluster is dyed red (that's got to be worth at least 50bhp). It's almost the same power, but with less weight, and with a significant increase in peak torque. 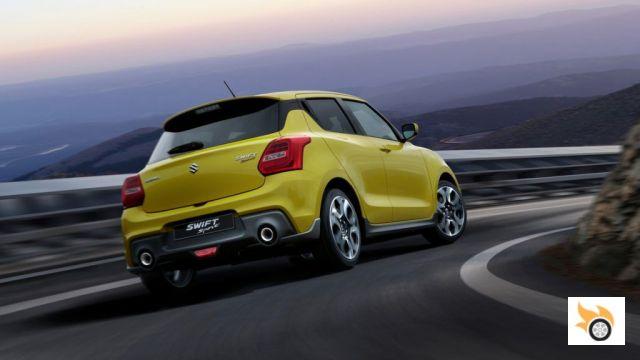 Fortunately, that figure is now much higher, at 230 Nm between 2,500 and 3,500 rpm, thus beating cars like the Toyota GT 86 in the power-to-weight ratio. Despite being a turbocharged engine, Suzuki promises it will still be a car that will like to keep going high revs. This lighter, more powerful Swift Sport should feel great on twisty roads. Needless to say, it will be offered with a locked six-speed manual gearbox. Unfortunately, the brand has not yet revealed acceleration times or top speed.

The suspension has been completely revised, with stiffer anti-roll bars and more widely spaced wheel bearings. Together with Monroe dampers, the result is a 15% increase in torsional stiffness, something to keep in mind when cornering hard. For its part, the rear axle has sought to improve stability, especially at high speed. It improves rigidity by 1.4 times compared to its predecessor.


The wheelbase is 20 mm longer than on the previous Swift Sport, while the front and rear tracks are 40 mm wider, which increases linear stability. In connection with the design idea focused on the car's handling and emotional connection, the body is 15 mm lower and 40 mm wider, creating a more athletic and robust appearance. 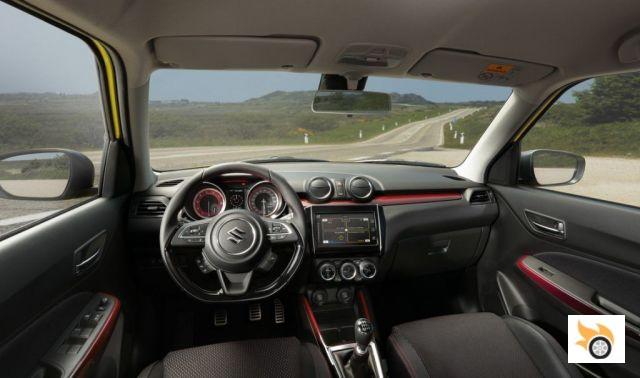 In the aesthetic section little can be said. It has all the ingredients to look like - and is - all a hot hatch: more aggressive bumpers, dual exhaust, aluminum wheels 17-inch diamond finish, the rear spoiler, diffuser or colors as striking as the Champion Yellow 4 or Speedy Blue Metallic. The interior of the 2018 Suzuki Swift Sport receives the improvements that already mounts the rest of the Suzuki Swift 2018 range, although with new elements such as touches of red emphasizing the feeling of dynamism.


Of course, the Suzuki Swift incorporates a lot of technology both in the entertainment section (3D browser, Apple Car Play, 7-inch touch screen, etc) and in safety, with automatic emergency braking system, warning system involuntary lane change, adaptive cruise control or automatic high beam. Surprising for what they're asking for it.

Let's hope Suzuki has kept the brilliantly accessible balance of its latest creation, rather than concentrating on getting bigger. We're looking forward to it later this year.