Kia has no competitive diesels with this petrol engine

Many are the new exclusive features that presents the GT finish of the Kia Optima, a clear example we have on the outside of the vehicle, where we find details such as a new front bumper sportier, rear bumper, which shines with its own light the marked rear diffuser and its double oval exhaust outlets in the style Audi RS, and 18-inch alloy wheels that show behind them a brake calipers now in red that bite larger ventilated brake discs.

If we move to the interior we will also find many new features. However, following the Kia spirit, we should not expect a cabin equipped with elements such as buckets, upholstered in leather back ... but is committed to offering a more elegant cabin. Among the new features are sport seats, suede headliner, aluminum inserts for the center console, leather steering wheel upholstered in flattened leather at the bottom and even a new specific instrumentation with gauges for turbo pressure and instantaneous engine torque. 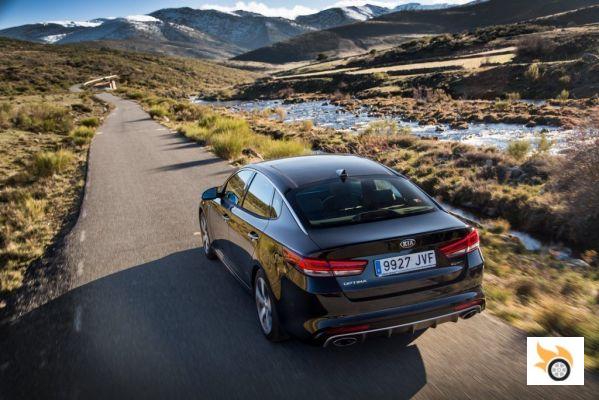 One of the most important parts of this version is found under the bonnet, where a four-cylinder, two-litre supercharged engine makes an appearance, capable of delivering 245 hp at 6,000 RPM and 353 Nm of maximum torque available between 1,350 and 4,000 RPM. With its six-speed automatic gearbox the Kia Optima GT is capable of accelerating from 0 to 100 km / h in just 7.4 seconds, reaching a top speed of 240 km / h. It has an NEDC fuel consumption of 8.2 litres/100 km for the saloon version, while the estate version accelerates from 0-100 km/h in 7.6 seconds with a top speed of 232 km/h.


To squeeze that power to the two-liter Kia has used a new direct injectors, with laser drilled holes, in addition to improvements in the CVVT variable valve timing system, a new high-pressure fuel pump or a series of improvements where Kia engineers have opted to optimize performance while offering a faster and more agile feel and response of the engine. The manufacturer boasts an extensive testing program at the Nürburgring.

As in other competing models, Kia has introduced in the new Optima GT the so-called "Active Sound System" which basically consists of introducing artificial engine sound through the speakers, a concept that, among others, already exploited brands like BMW in their sportier models. It is not to be expected, therefore, that its natural exhaust sound is particularly striking. 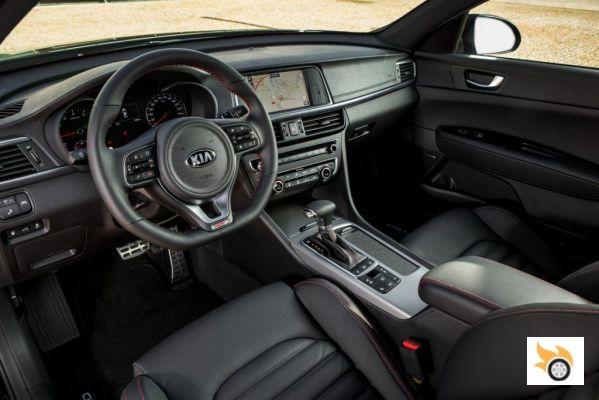 In the dynamic aspect, Kia engineers have opted to add ventilated brake discs on all four wheels in 330 mm for the front axle and 314 mm for the rear, while the suspensions, equipped with electronic control - which modify its stiffness depending on the selected driving mode - have been modified to significantly improve the behavior of the vehicle both on the road and in the city.


Comparing the suspension of the GT version with other models in the Kia Optima catalogue, we find a 10 mm lowering in height and stiffer shock absorbers on both the front and rear axles. In turn, the hardness of the springs is increased by 11% for the front axle and 10% for the rear. Thanks to the installation of a stiffer anti-roll bar and new rear bushings, in turn, agility is increased while the response to any turn of the steering wheel is more immediate, at least according to Kia.

At the moment the Kia Optima GT has no price defined for the Spanish market.