Solar power arrives for the Toyota Prius, but this time it will be useful

The solar panels are not able to provide enough power to drive the electric motor when the car is running, but they can provide a boost to the batteries when the car is stationary and there are no plugs in sight. On electric power it can go almost 60 kilometers, depending on how long the sun shines, the panels will charge more or less, even if it's cloudy.

And now comes the million-dollar question: how many kilometers and in how long? Toyota hasn't given such concrete figures. All I've found is that you can do up to 1,000 kilometers a year with solar energy, or reduce consumption by 10% by using more of the electric part of the car. On the move the panels can support the 12 volt electrical system, that saves fuel too, but not in appreciable values. For the most Taliban priuseros, every superfluous energy expense that is eliminated is already a gain.

These panels have another small drawback, which is that they can shatter in the event of a rollover due to the use of glass layers. Material technology has not yet managed to solve this, and as long as this is the case, this option cannot be sold in the United States because of the anti-rollover regulations. That's not a problem in Europe. Toyota hopes that before this model's life is over, that problem will be solved. The United States is one of the main markets for the Prius, not a small detail. 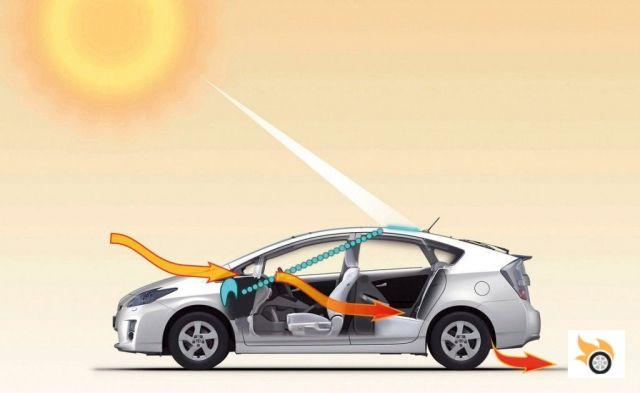 In the previous generation of the Prius, there was also an optional sunroof with energy-harvesting cells. Did they charge the battery? No. They only served to move the air conditioning fans, without an air conditioning compressor, so that the car wouldn't be scorching when parked in certain places. I tried it in Seville in summer and I didn't think it was the invention of the century. More useful was the possibility of turning on the air conditioning with the remote control, and getting into the car with breathable air. That's where I bought the argument.


At the time I read that it was not possible to channel the energy from the solar panels to the battery because it would cause interference to the radio. I also heard, but let's not rely too much on my memory, that eight hours of radiation would not save enough energy to travel "a few hundred meters". This panel generated 60 watts of power at 27 volts peak (22 nominal), or a current of 3.6 amps if Lorenzo was really pushing it hard. Given that the traction battery has a capacity of over 1 kWh, recharging that would certainly take an awful lot of time at that rate.

Other models that have had solar panels for secondary uses have been the Audi A4/SEAT Exeo or the Nissan Leaf. In the case of the Germanic, it is a system of forced air circulation, like the Prius 3g, so that the interior does not become a damn sauna when you park the car in the sun. In the case of the Leaf, we're talking about a small panel that sits on the rear spoiler, which barely provides power for the 12-volt circuit inside. The impact on the car's range can be considered negligible. 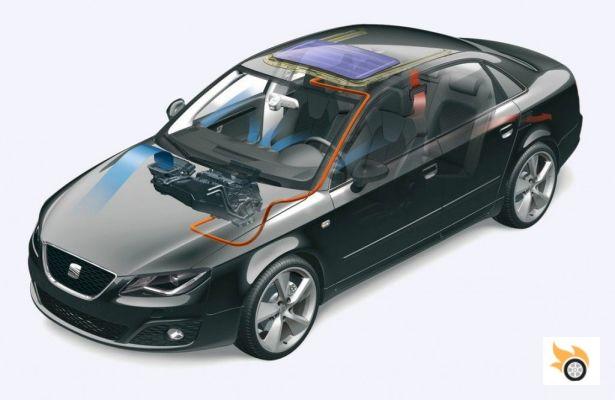 It is true that we have seen a few prototypes with solar panels, such as the Saab 9-X BioHybrid concept (2008), or the participants of the mythical solar car races that have been made in Australia. In the latter case we are talking about vehicles that move thanks to the sun, but they are as far away as the star in question from being a reasonable alternative to be used every day. Solar panels start to be interesting when they have a certain energy input, and in normal conditions, not in the optimal case.


Going back to the Prius Prime, if we want to move a car with such good aerodynamics (which leads the industry along with the Tesla Model S) we need at least about 30 hp to drive at highway speed on the flat, that's about 22 kW of nominal input. In the area that can be filled with solar panels on a car, get such a power is a bit complicated today. In a few years, as the performance of the panels improves, we might be able to do a few more kilometres thanks to Lorenzo. Let's hope that then no enlightened politician will come up with a new tax to touch our bearings.

add a comment of Solar power arrives for the Toyota Prius, but this time it will be useful