The similarities with the ZOE are obvious... on the outside, since under that bodywork, which is made of carbon fiber, they have a tubular steel chassis that looks nothing like the ZOE. The exterior color, Satin Blue, is the predominant color of the Renault e.dams team's cars in the electric competition par excellence. The light signature in the shape of a "C" is common on the latest Renault e.dams models, which, by the way, is backlit.

Various touches of yellow and carbon give it personality.

The door handles have disappeared; they now open by sliding your hand over the bodywork. Other obvious differences with the standard ZOE are the widened tracks, the roof spoiler, the bumper beads and the air intakes at the rear. The 20″ single-nut wheels are fitted with slick tyres - without tread. The windows are tinted, it won't bother the rear passengers because it's a two-seater. 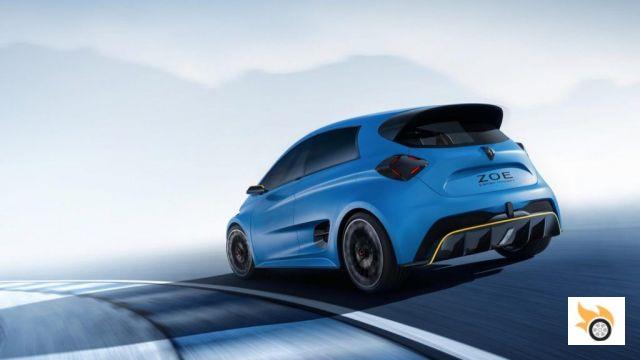 Racing aerodynamics is one of its secrets. Like racing cars, the underbody is completely faired, and it has a rear diffuser reminiscent of Formula E cars. It is capable of reaching 210 km / h, we understand that self-limited, given the power of the engines. The power output of the batteries has not been specified, only their capacity, 40 kWh each. The ZOE z.e. 40 has 41 kWh on top, it looks like a wink wink.

It has an electric motor on each axle, combining 460 hp of power, well over the 270 hp that is tolerated in Formula E. In other words, it has all-wheel drive. To reach 100 km/h it only needs 3.2 seconds, the same as a McLaren F1! If you wait almost 10 seconds from a standstill, it reaches 210 km/h. With a weight of 1,460 kg if we include batteries and a driver, the power-to-weight ratio is astounding: almost 3.2 kg/hp. 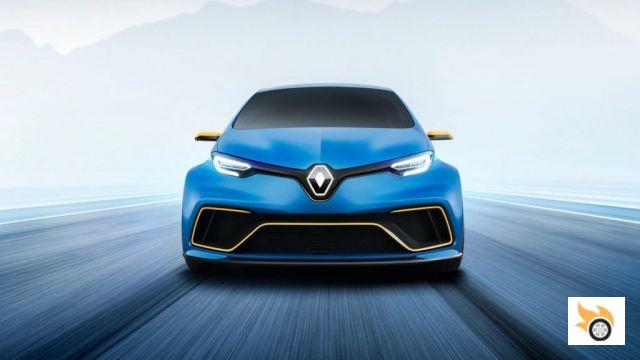 If mass-produced, it would be a very expensive toy, but a lot of fun. Just look at some of the components: big disc brakes, OHLINS four-way adjustable shock absorbers, 245/35 R20 tyres, double wishbones on both axles, lowered ground clearance, four drive settings, air/water cooling system for electronics and batteries, etc.

Rider and co-pilot sit in RECARO bucket seats with six-point harness. It has all the goodies of a real racing model, such as the rectangular steering wheel (with all the necessary adjustments), Alcantara for the covering of various surfaces, black all over and the safety cage.


Obviously such a device is not going to reach the street, but it would be curious to see a ZOE Cup with these cars. The truth is that Formula E is an extreme test bench, from which some technologies may end up in street models. Electric cars are undergoing a great evolution and the barriers that separate them from their future owners are falling one by one.