The French brand and its subsidiary Nissan have been betting on electric cars for years, and now that everyone is going electric, either with prototypes or street cars, it seems that Renault does not want to miss the opportunity to remind us that they are the ones who have sold more electrics in Europe.

Renault says the Trezor has been developed from the brand's experience with its Renault E-Dams Formula E team, and with an output of 260kW (350bhp) and 380Nm of torque it goes from 0-60mph in under 4 seconds. These aren't eyebrow-raising figures today, but they're more than enough for the open road, and they seem realistic. 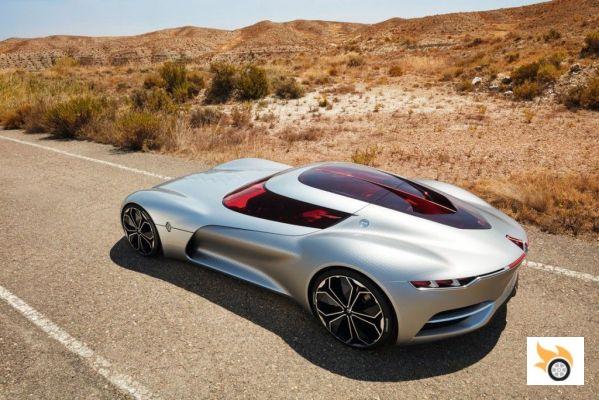 The prototype mounts two batteries, one in the front and one in the rear, and the total weight is a relatively contained 1,600 kg. Renault does not announce the autonomy of this futuristic prototype, and does not clarify its transmission system or type of propulsion, although it is very possible that it has all-wheel drive. Of course, the press release emphasizes that the driving will have autonomous mode...

The chassis has a central cell in carbon fiber and tubular sub-chassis front and rear, and its measurements are as spectacular as improbable, with a width of 2,180 mm, a length of 4,700 mm and a height of only 1,081 mm.

"French Design and Easy Life" is the design motto that Laurens van den Acker, Director of Industrial Design at Renault, has come up with for the brand's design philosophy.

Van den Acker, who has held the position at Renault since April 2009, is responsible for the design of the new Renaults, a style we can see in the Clio, Twizy, Captur, Espace, Talisman and the imminent Scenic... and he says that this Trezor is the next evolution of the brand's design language, so it's worth taking a closer look. The first thing that strikes you about the Trezor is its deliberately dramatic proportions - Renault wants to attract attention at "its" Paris Motor Show, and the 21- and 22-inch diameter wheels also do their bit.


The second thing is the choice of colors, with a very discreet silver color for the body that seems chosen to highlight its spectacular red glazing. The interior colors are pleasantly surprising for renouncing the usual "chromatic salad" of some concept cars, and its red is perfectly coherent, and almost cozy.

The shapes and proportions of the car are classic, and combined with the aesthetic language of the brand are very attractive, you could say it's a sculptural car, sensual, and even sexy ... Of course, the spectacular top opening to access the interior will attract public attention, but personally I find it a bit gratuitous and actually unoriginal, since the beautiful concept Chevrolet Corvair Monza GT of 62 are several concept cars that have used similar solutions. But it is forgiven, after all, more than a concept car, it is a real dream-car. 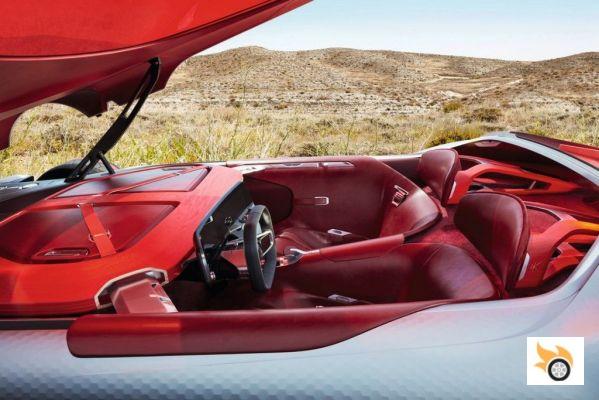 The triumph of texture

Laurens van den Acker already experimented with textured surfaces during his time at Mazda, designing interesting concept cars such as the Nagare, Ryuga, Hakaze and Kyyora, very beautiful designs but with a language that, when they were transferred to the series in the undulating sides of the 2010 Mazda5, not everyone liked... But Laurens keeps trying, and when he arrived at Renault he designed the beautiful (and partially textured) DeZir Concept, until he managed to place them discreetly on the lower part of the rear bumper of the Clio IV.

The texture is back with a vengeance, and in this Trezor the whole rear of the body and part of the front are textured with exagonal shapes, with a really interesting aesthetic result. Congratulations Mr. Van den Acker!


The exagonal motif is repeated in openings on the bonnet that open and close according to cooling needs, and in numerous motifs inside and outside the car, and the contrast with the rounded shapes of the bodywork is novel and daring. It could be argued that textured surfaces will be difficult to repair or polish, but I think they have some future, perhaps not in large panels, but in detailing. 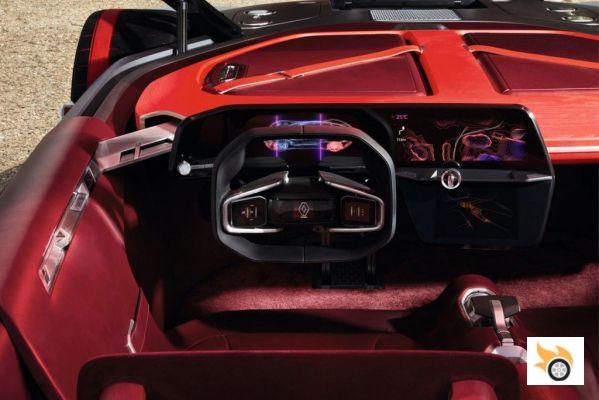 As I said above, I find the choice of an almost monochromatic interior in a beautiful red colour interesting, and the absence of doors allows for some very cosy seating, which enhances the beauty of the materials used. Everything is very simple and obvious, simple, like in the racing cars of the 60s.

In addition, the shapes of the surprising "dashboard/trunk" in red wood are so minimalist that make it go almost unnoticed, and it is interesting how it is visually divided from the instrumentation and buttons in black, which seems to float. All in all, a cosy yet sporty interior that suggests comfort, sportiness and that charming French comfort. What do you think?