Engine oil change: How often? Here are the details! 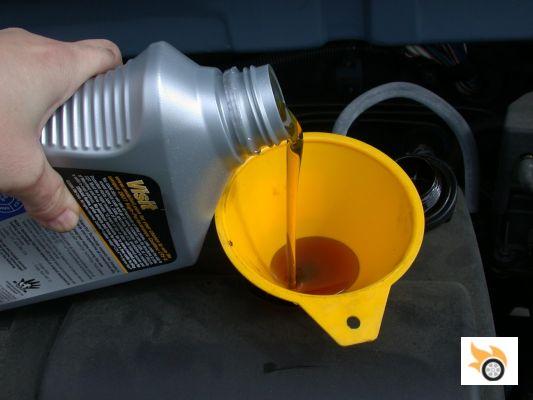 Why do you need an engine oil change?

Many motorists wonder what an engine oil change is and why it is so important. Well, oil change is a simple maintenance procedure in which the lubricating oil is removed from the engine and replaced with the same type of oil but new, hence the term "oil change".

We must remember that when the car's engine is running all its internal mechanical components are subject to strong friction and pressure. Without the lubricating effect of engine oil, the metal parts would destroy each other, making it necessary to change the engine. Engine oil reduces the friction generated by metal-to-metal contact and minimizes engine wear.

After many kilometres and over time, engine oil loses its lubricatingpower or simply becomes contaminated with metal residues. Therefore, an engine oil change is necessary to restore the perfect lubrication of the engine with a new oil that is intact and free of imperfections.

How often should an engine oil change be done?

Although modern cars are very similar in terms of maintenance, there are still many differences. Every engine has different requirements and therefore it is not easy to give a universal answer when one wonders how often an engine oil change should be done.

Like many aspects of car maintenance, the most accurate indication of when to change your car's engine oil can be found in the owner's manual.

To be on the safe side, and therefore make a downward mileage estimate between oil changes, you should change your engine oil every 15,000 kilometres, or every year in the case of underused engines. You don't have to wait until you've reached the 15,000 kilometre threshold because even a stationary car needs an engine oil change sooner or later. This is because the oil loses lubricating efficiency over time and the possible infiltration of air and dirt.

How many litres of oil are needed for an engine oil change?

Every car requires a different number of litres for a complete engine oil change. A small medium-sized car usually needs 4 litres of engine oil, a large-engined SUV may need twice as much.

What are you waiting for an expensive engine oil change?

When you have to change your engine oil, it's natural to wonder how much you can afford to spend. Giving an answer to this question is not easy. You have to keep in mind that the cost of almost all car maintenance, apart from car servicing, depends on the type of car in question.

In the case of an engine oil change, the cost depends on the size of the car, which affects the number of liters of oil required, and the type of engine oil needed. Generally, the cost of changing the engine oil ranges between 30 and 60 euros in the case of a common utility car. If we also have to change the oil filter, then we have to add 10 euros to the cost.

What happens if I change the engine oil late?


The older an engine is, the more correctly the internal parts are lubricated. However, modern engines, produced to millimetre tolerances, need perfect lubrication.

Our advice is to avoid late engine oil changes and always try to keep to deadlines. A few days late will not cause any harm, but prolonged use of old engine oil will surely result in increased engine wear and damage.

What about never changing the engine oil?

Fortunately it happens rarely, but it is not impossible to find people who are unaware of the need to change their engine oil. Not changing the engine oil is tantamount to forcing the engine to work in conditions for which it is not designed. If the engine oil becomes too old or dirty, which happens naturally over time, we are bound to have engine damage.

Most modern automobiles have an engine oil warning light that illuminates in the event of an oil-related failure to prevent possible engine damage. If we find this light on, we need to turn the car off immediately and assess the condition of the engine oil by checking the level.

How often should the diesel engine oil be changed?

As we have explained before, each car model has its own specific engine oil change interval due to differences in engine type and engine oil wear. Some cars are known to "drink more oil" while others may use the same oil for tens of thousands of miles. The general advice is not to let more than 25-30 thousand km pass between engine oil changes. The same rule applies to diesel engine oil change.

Every time an engine oil change is performed, the mechanic usually advises that the engine oil filter should also be changed. Many motorists wonder if it is really necessary to change the filter every time the engine oil is changed or if it is the "usual trick".

To give a simple answer to this question we only have to think about what is the point of putting new oil in the car if it passes through a filter that is now dirty with metal residue. It would be like taking a shower after the gym and putting your sweaty clothes back on. Doesn't make sense, does it?

In the end, the cost of the filter is about 10 euros and this is really necessary to safeguard the health of the internal mechanical components of the engine. By combining the filter change with the engine oil change we guarantee a perfect lubrication without metallic residues in the heart of our car.

Once the engine oil change is done, many people wonder what happens to the dirty used oil removed from the car. If the engine oil is changed, the mechanic will take care of the disposal according to the current laws. If you change the engine oil yourself, you must also dispose of the used oil correctly and in an environmentally friendly manner.

Engine oil is a highly polluting substance and very harmful to the environment if disposed of illegally. The law prohibits the disposal of used oil after a motor oil change as if it were normal cooking oil.

There are several channels for the proper disposal of used motor oil. Among them are collection centers that often coincide with recycling plants where other types of waste are also taken. Then we have the option of taking the used oil to the garage or to the better equipped service stations. The last two channels may require payment for disposal.

Engine oil change: everything you need to know! ❯

add a comment of Engine oil change: How often? Here are the details!