Lexus CT 200h, in front of its latest restyling

Until the new model arrives, already with TNGA architecture, has to endure what remains on the market with a last slight restyling. All changes are aesthetic, plus a new infotainment system with 10.3-inch screen and improved active safety systems. The engine remains as it was, the 1.8 2NZ-FXE that also mounts the Toyota Auris 140H (hybrid).

One of the "problems" of the CT 200h is to have had a chassis far beyond the possibilities of the engine, which is not that it is slow (I attest), but the packaging promises otherwise. Not a lot of noise, not a lot of nuts. On the other hand, the hybrid combination between that 1.8 and the 80 hp electric motor has been one of the most reliable on the market for years. The same cannot be said of all its petrol and diesel opponents, especially when used intensively in the city.

These two images correspond to the CT 200h F Sport model, which is a bit more heavily cycled. On both the regular and F Sport models the daytime running lights have been integrated into the upper arrows of the headlights, and the grille has a new pattern. Gone is the unsightly black bumper stripe at license plate height. At the height of the fog lights, trim, in the F Sport we speak of false air intakes.

Laterally nothing changes, except the designs of the 15, 16 and 17-inch wheels. At the rear we find integral LED light clusters, more horizontal, but not as horizontal as on the Renault Mégane. At the bottom, a tweak to the bumper, and the rear reflectors are covered by more false air outlets. The brakes don't get tired on this car, darn it.


According to the product manager in Japan, Chika Kako, the aim of this refresh is to appeal to young drivers who enjoy spirited driving but care about the environment. It's going to stay in intent. The car, dynamically speaking, goes very well, but it doesn't exactly encourage "spirited driving", at least not in the sense that we pistonheads do. We accept that we want to respect the environment, only the electric, plug-in hybrids and natural gas of the competition can cough the CT 200h in low polluting emissions. 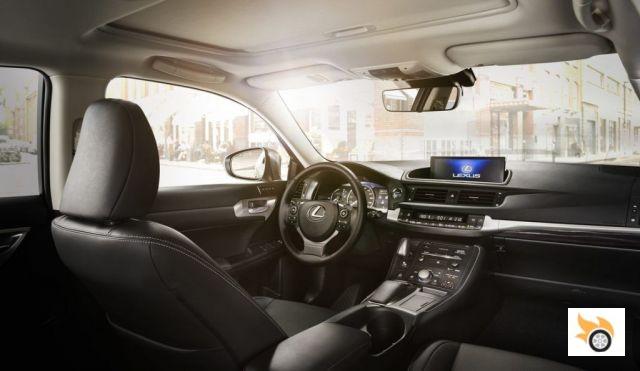 As for the interior, the car improves substantially with the larger screen, but the press release does not describe any improved functionality, nor compatibility with Android Auto or Apple CarPlay. More noticeable is the expanded material combinations, it now has nine choices of inserts and cloth, mixed or leather seats.

The most relevant of all the 2017 model are the safety systems. With the Lexus Safety System+, the compact gets a forward collision warning system (PCS), adaptive cruise control with radar, lane departure warning (LDA) with steering correction, automatic high beam headlights (AHB) and road sign recognition (RSA). In other words, these are primarily TV camera-based systems.

It still lacks blind spot warning, automatic pedestrian braking, rear cross-traffic warning, fatigue warning, etc. However, the equipment is decent for a contemporary car. Its fuel economy is good for a petrol with no toxic particulates to worry its owner, and with the ECO sticker from the DGT. 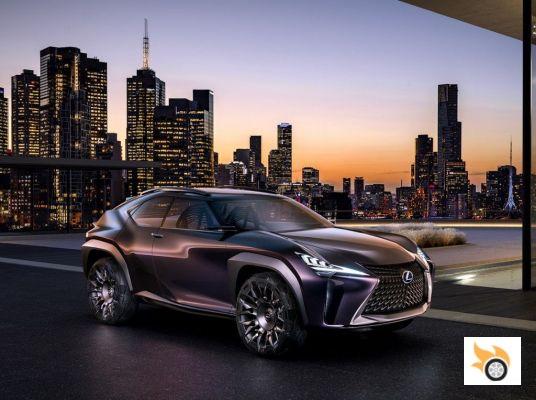 Its successor is likely to look like this. It's the UX Concept we saw last year in Paris. Since crossovers sell themselves, Lexus can abandon the compact segment and go for a crossover smaller than the NX. Lexus just has to copy the formula of the Toyota C-HR, which sells like hot cakes despite its "rickety" 122 hp (which yields about the same as the previous 136 hp due to platform optimization and lower weight).


In 2010, when the CT 200h was launched, having a compact premium hybrid was more exotic than anything else. Today it has more noticeable advantages, especially in Madrid and Barcelona (where almost 50% are registered in Spain). In the case of the capital, hybrids skip traffic restrictions in pollution scenario 3 (petrol and diesel go by final registration number) and can now park for half the price in the SER zone. For some customers, all that becomes decisive, others prefer to wear a German badge on a hood that has three cylinders underneath or a basic diesel, those who have much cheaper cars, and have to travel occasionally by train, subway or bus.

Golf Sportsvan gets a facelift at Frankfurt Motor Show ❯

add a comment of Lexus CT 200h, in front of its latest restyling