Are convertibles only for the summer?

Before I get into the subject, let me start the article by remembering the first time I got into a convertible, that was about twenty years ago, but I remember it quite well. It was thanks to a friend who, knowing my passion for cars, asked me one day if I wanted to take a ride in his brother's Boxster... what a question!

For me, and at that time, a Boxster with its two hundred horsepower was a real racing car, but as I imagined that I was not going to be able to drive it, my curiosity was more directed to the "convertible" aspect, than to get into a Porsche, which also...

And finally came the "D" day: a cold and grey morning in early November in which we could not rule out some rain, so to be honest, it did not seem the ideal day to take a ride in a car without a roof... But well, after some hesitation, we decided to open the top, and try...

But this is great! I'll remember the experience for the rest of my life: sitting a foot off the ground, the almost go-kart-like reactions of the Boxster, the roar and thrust of its boxer six-cylinder in the back... but above all, feeling the fresh air on my face, the light that flooded the cabin, the sensation of speed and movement... really fun! 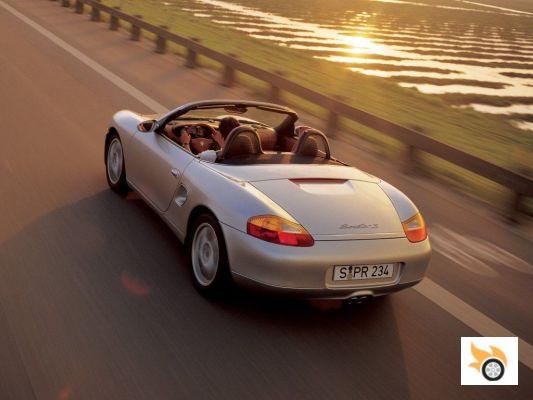 As you can imagine, before the little drive came to an end, I had already told myself that one day I would have a car without a roof.

Years later, there came a time when we needed a second car at home... It was my big chance! It didn't seem easy to convince my wife, but she says that when I'm really interested in something, I'm really tenacious... (tiresome, she would say).


Well, although I imagined myself driving James Bond's sky blue BMW Z3 in Goldeneye, our two children, who were young at the time, and my paternal instinct made me change my plans and buy a beautiful and very well maintained Peugeot 206 CC 1.6, a little car that I ended up liking a lot. At the beginning, our children were delighted in the back seats, but little by little they grew up, and the day came when there was no way to "put them" in the back... I remember that car with affection, with which we enjoyed a lot, and that helped me to learn a couple of things about convertibles.

Then came my second convertible: an MX-5, then another MX-5, and now I'm driving my third MX-5, the fourth convertible we have at home.

So what do you expect from a convertible?

If you're buying a convertible with summer in mind and you've never tried one before, you may be in for an unpleasant surprise when you discover that in summer, and remember this, because it's important: you'll only be cool early in the day, or when the sun has already gone down. Because when the sun is beating down, riding with the top down can be a real pain. However, summer sunsets by the sea are a joy, and - why not say it - it's also cool to take your mates for a stroll along that trendy boulevard?

If this is what you're looking for, then yes, convertibles are for the summer. However, when you have friends in the back seats, don't go over 50 km/h, if you want them to come back to occupy the back seats another day... 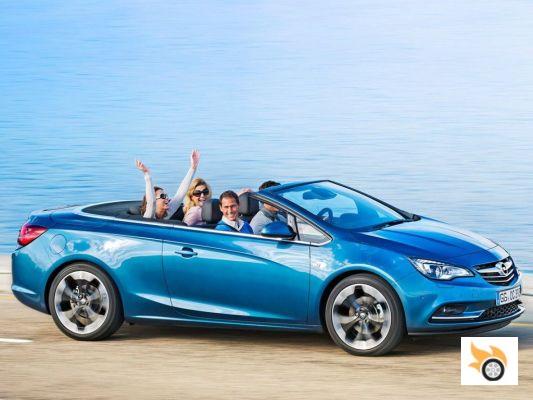 Tell me where you live, and I'll tell you when you'll go open top.

The climate of the area where you live is very important. If you live in the northwest of Spain, that is, between Galicia and the Basque Country, you will be able to enjoy your convertible almost all year round, only the rain and the odd unpleasant winter day will put you off open top driving. But if you live in any other part of Spain, you will soon realise that when the heat is on and the sun is high, it is best to close the hood and turn on the air conditioning, otherwise, your back will end up drenched in sweat, and you with a sunstroke, and is that in a convertible is not as "cool" as it might seem ....

And while we're on the subject of summer heat in convertibles, why do manufacturers insist on leather seats? In the Spanish summer, they're a real pain!

So when do you enjoy a convertible?

Although you may find it hard to believe, in a well-designed convertible - I'll go into more detail later - the temperature in the cabin is always a little higher than outside, and that's without turning on the heating, so the best seasons are actually spring and autumn. In those seasons, driving a convertible is a joy, especially when the sun comes out and it's just warm enough to feel the fresh air on your face...

But what about winter?

If the sun is out, you'll only need a comfortable jacket (it doesn't need to be very thick), and if it's very cold, a woollen hat to cover your ears. It's great, and you won't get cold at all, although people will look at you as if you were a Martian...


What if the sun doesn't come out? Well, cloudy days also have their charm. I was telling you that in a well-made convertible, it's less cold inside than outside, so going open-top on a cold day gives us a feeling similar to being in an outdoor jacuzzi: How nice it is to feel your body warm while you feel the fresh air on your face!

And on rainy days? Those of us who like convertibles love to hear the rain falling on the roof. 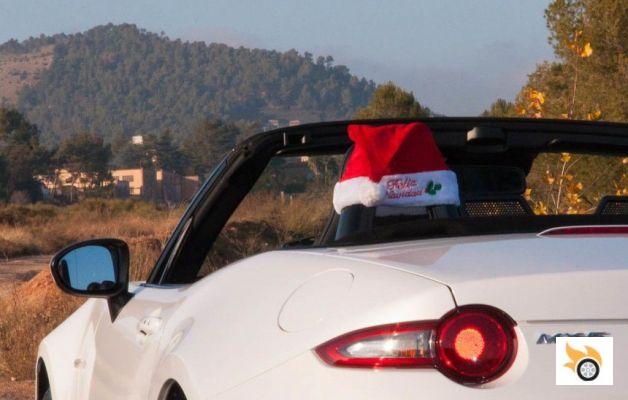 Does the type of convertible have an influence?

Yes, very much so. In a convertible, what really bothers us on the road is the turbulent air coming from behind, and not only because of the cold air that punishes your neck and cools the passenger compartment, but also because of the noise. This turbulence is due to the fact that the air, which at first is deflected upwards by the windscreen, then tends to go downwards, and it does so just after passing over the front seats, forming significant turbulence. These eddies cause a stream of air from the back to the front that increases with speed, which is very annoying on the road. 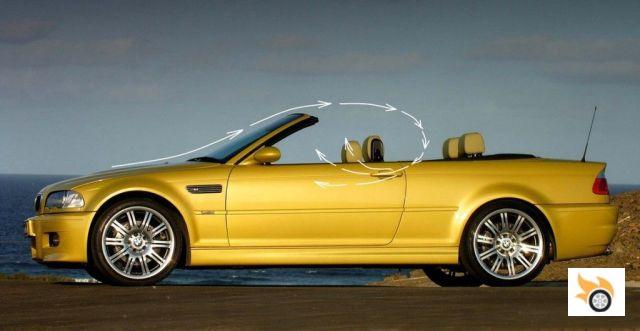 But don't panic! There is a solution, and it's called a wind deflector. They are usually made of a grille, and are placed behind the headrests of the front seats, blocking the turbulence coming from the rear.

It is an absolutely essential accessory in four-seater convertibles, and highly recommended in two-seater convertibles. Some cars have it as standard, and in the rest, it is usually offered as an option or accessory. In any case, it must be taken into account that once fitted (it is removable) it renders the rear seats unusable when they exist. 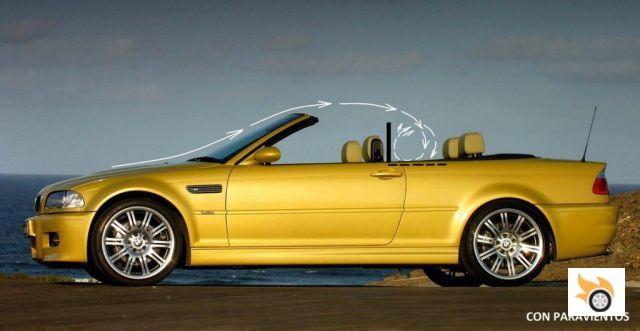 Of course they do! (at least for me, there are some that I really like), you just have to be very clear that in order to enjoy them on the road -as two-seaters- it is essential to mount the rear windshield. Obviously, the two extra seats provide some practicality, and -among other advantages-, going back to school "in a convertible" will always be less hard for your children...

In any case, if you are interested in a four-seater convertible, I recommend you to study well the different options offered by the market and try for yourself the rear seats, because they are often narrow, have little legroom, and what is worse, have the backrest uncomfortably vertical. On the other hand, check the access, and that they are not excessively claustrophobic.

What am I exaggerating? Look at the photo of the rear seats of the Beetle Cabrio or any compact converted to convertible... 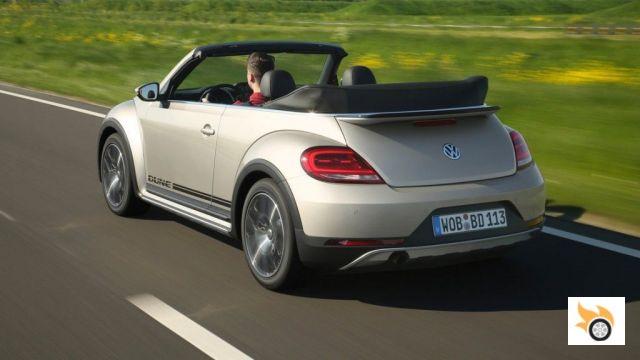 Roadsters are a different matter, as they are designed from the ground up as convertibles. Obviously, this has many aerodynamic advantages. First of all, the windshield and the rest of the aerodynamics are designed from scratch to minimize turbulence in the passenger compartment, the area behind the backrests is less exposed to turbulence, and also, a small wind screen can be enough to virtually eliminate the problem of turbulence.

Some models are better resolved than others, but in general, in a roadster of recent design, it is possible to drive unroofed and with reasonable comfort at 120 km/h. It is only necessary that the outside temperature does not drop below 5/10 ºC, and does not exceed 25/30 ºC, depending also on whether the sun is shining or not. 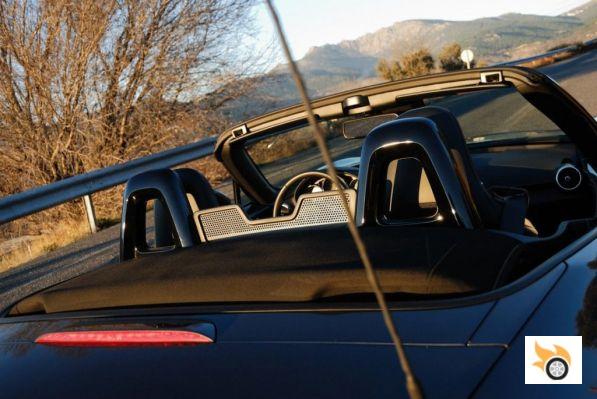 In short... If you like to feel the fresh wind on your face and the sun on your head, don't wait until the end of spring to buy a convertible, because as soon as you get one, you'll realise that when you enjoy it the least, it's in summer. And if you want a four-seater, make sure you check the comfort of the rear seats, and -above all- get a good windshield.

New car buyers are getting older and older ❯

add a comment of Are convertibles only for the summer?