Golf Sportsvan gets a facelift at Frankfurt Motor Show

The changes are subtle and are based on those received by the rest of the Golf range earlier this year. On the exterior, the bumpers, front grille and light clusters change slightly, as well as the wheels, with new models available. There is also a new color available called Cranberry Red, which stars the only image that has provided the manufacturer.

Inside, the changes are as few if any. There are new upholstery designs and some decorative moldings change. There's a new infotainment system - top of the range - with a 9.2-inch screen and gesture control system. It is the same as in the new Golf and is part of the optional equipment. What won't be available, at least initially, is the fully digital dashboard that the Golf does have (standard or extra depending on version).

There are new driving assistance systems, such as the city emergency braking device with pedestrian recognition, which works below 60 km/h, the Emergency Assist. It is able to detect if the driver is distracted, in which case it sends audible and visual warnings. Also available will be the trailer parking assistant and a new version of the semi-automatic parking system that is now able to park in smaller spaces, automatically exit the space and park in battery. 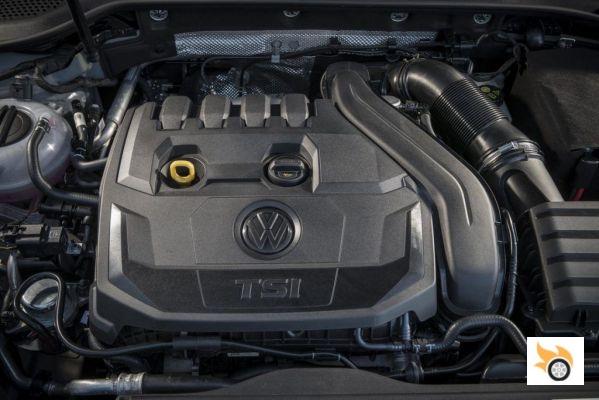 As for the range of engines Volkswagen has not given many details. There will be three petrol TSI and two diesel TDI. The two most powerful of the petrol range will have the cylinder disconnection system, they haven't said anything else. The petrol range will most likely consist of the 115bhp 1.0 three-cylinder and the 130bhp and 150bhp 1.5 TSI EVO (pictured above). The diesel range will probably consist of the 116 PS 1.6 TDI and the 150 PS 2.0 TDI, the same as those already available in the current version. The DSG dual-clutch automatic transmission will also be available on almost all versions.


Rivals? Few. There are fewer and fewer MPVs and almost all of those that remain are larger than the Golf Sporstvan. Direct competitors are the BMW 2 Series Active Tourer, the Mercedes-Benz B-Class and little else. Both of these models are more expensive than the Volkswagen.


In terms of price and equipment the brand has not given details but will remain virtually unchanged from the current version, although the level of equipment included may increase over the models on sale.