The version with electric motor has some changes on the outside with respect to the hybrid, such as the flat front grille in gray without air intakes, to improve aerodynamic efficiency. In this way it achieves a Cx of 0.24, one of the lowest in the market, only surpassed by the Mercedes-Benz CLA and the Volkswagen XL1. The headlamps and lights are also slightly different.

It features a copper-colored trim below the front and rear bumpers as an allusion to the electric technology. If Marina Blue, Phoenix Orange or Blazing Yellow is selected for the exterior, the trim will be silver. Blazing Yellow is an option that is only available on the IONIQ Electric. 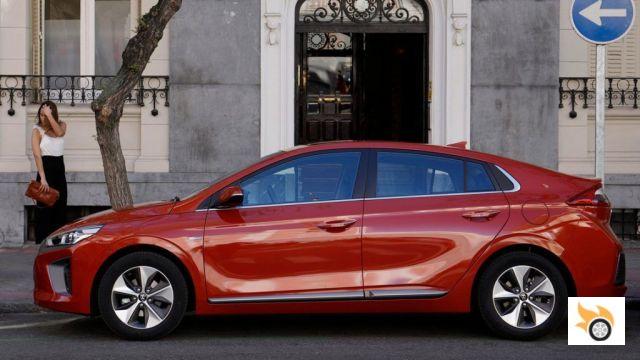 Let's go with the most important thing in an electric vehicle, its batteries. The Korean electric vehicle is equipped with 28 kWh lithium-ion batteries. The capacity is significantly lower than that of the Nissan Leaf, which is the world's best-selling electric car and has 30 kWh except in the basic model. Among electric models it is one of those with the lowest battery capacity - most rivals are above 30 kWh - although fuel consumption is, on the other hand, quite low at 11.5 kWh/100 km in NEDC cycle (i.e. in homologation). With such sharp aerodynamics the impact when driving over 100 km/h would be less noticeable than in the Leaf, which, not being a Kammback, is less efficient in that respect.

The range in realistic conditions of use can be estimated at 150-200 km.

Power is provided by a permanent magnet synchronous motor, whose parts have been optimized by reducing the thickness of the basic components - electrical steel sheet - by up to 10% and using rectangular-section copper wire to reduce the loss of the basic components and copper. It delivers a maximum torque of 295 Nm, but in what rev range? Well, as in any electric vehicle, in the whole range or, in other words, at any moment the motor is able to deliver maximum power. The engine power is 120 hp and the maximum speed is 165 km/h.


It has three driving modes: ECO, NORMAL and SPORT with which different parameters are modified. It has paddles behind the steering wheel, but they do not have the use we are used to, since in this car there are no gear changes, the paddles in this vehicle are used to adapt the regenerative braking. Also noteworthy is the mobile phone charging system by induction and the electric parking brake. 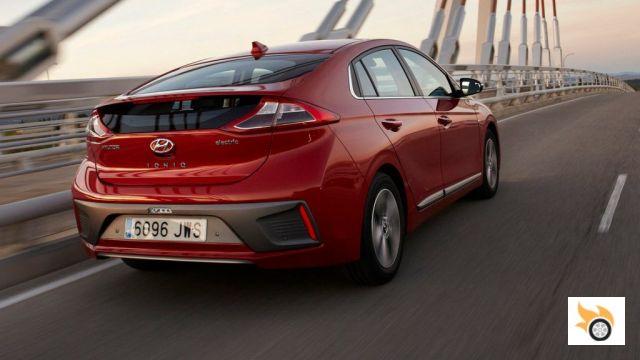 We can perform a quick charge with a 100 kW DC charger in which 80% of the battery is charged in 24 minutes. Using a cable included in the vehicle (ICCB) we can charge the car in a conventional AC outlet in about 8 hours at 16 amps. The charging socket is located in the place where the fuel filler neck would be.

One aspect that is different in the electric IONIQ with respect to the other two versions is that the rear axle is by a torsion bar instead of the multi-link that equip the hybrid and plug-in hybrid. The reason for mounting a torsion axle in this electric version is the need for space to house the batteries, which are bulkier than in hybrids for obvious reasons.

Three equipment versions are available: Klass, Tecno and Style with recommended prices of 34,600, 37,100 and 39,600 euros, respectively (they may be lower at dealerships). One aspect to highlight is the warranty, which in all Hyundai vehicles is five years with no mileage limit. In the Ioniq the brand adds a warranty of eight years or 200,000 km for the batteries, plus eight years of roadside assistance. 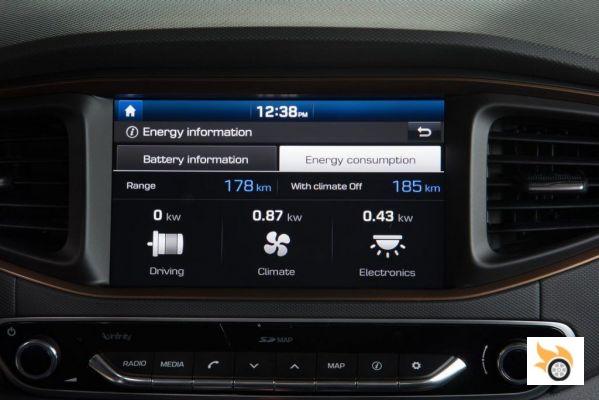 The entire IONIQ range is manufactured at the Ulsan plant in southeast Korea, the world's largest car production site, with 1.53 million passenger cars and light commercial vehicles produced at the plant in 2015. Data for 2016 have not yet been provided.

Lexus LS 2017, the fifth generation of the saloon arrives ❯

add a comment of Hyundai IONIQ electric arrives in Spain