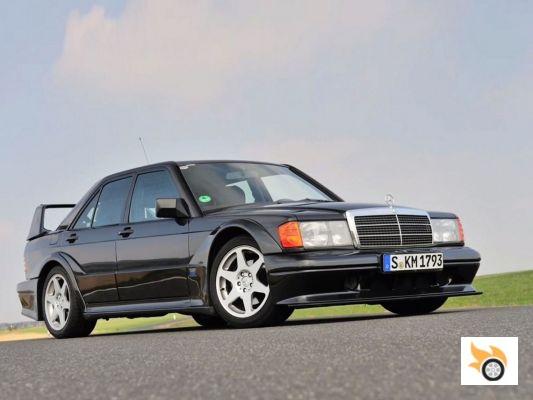 Mercedes did not stop developing the sporty version of the 190E until it won the DTM championship for the first time in 1992.

At the Frankfurt Motor Show in 1983, that is, in the second year of commercial life of the Mercedes 190E, the firm of the star presents two new versions of its newly released sedan. One is the diesel version, the 190D, but as interesting as it was, the public is left dreaming of the 190E 2.3-16 that is presented that same day. The car ignites passions thanks to its relatively striking body kit and, above all, thanks to its 2.3 litre 4-cylinder with a Cosworth cylinder head with 4 valves per cylinder. At the time, a 16-valve four-cylinder was something very new. It developed 185 bhp and went up to 7,000 revs. It covered 0-60 mph in 8 seconds and reached 230 mph. 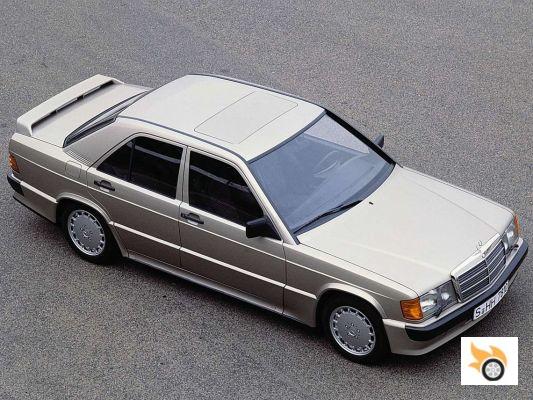 
That year, the 190E sports model does not leave the range, but receives an update and sees the displacement of its engine to 2.5 liters. Logically, the car is renamed 190E 2.5-16 and the power goes up to 195 hp. In fact it is to adapt the engine to the new exhaust with catalytic converters (mandatory in what was then called the EEC) and that eat quite a lot of power. The performance improves with a top speed of 235 km/h and, above all, a 0 to 100 km/h in 7.7 seconds. 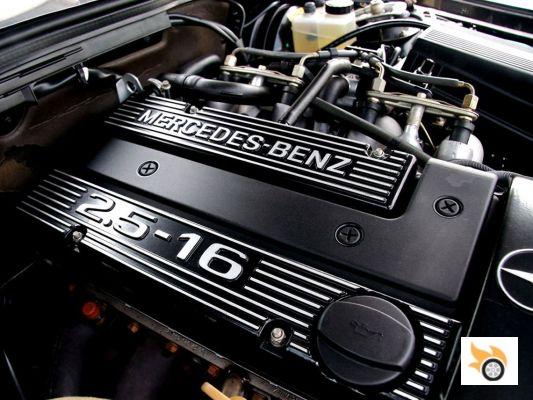 In competition, Mercedes still hasn't won the DTM title. Curiously, in 1988 it was a certain Klaus Ludwig (we'll talk about him again) who won the DTM title at the wheel of a Ford Sierra Cosworth. At Cosworth they are naturally very happy; at Mercedes, not so much.

Since the start of the DTM in 1984, all of the brands involved had won at least one title, except Mercedes.

In 1988, Mercedes had participated with 5 teams (AMG, Snobeck, Marko, IPS and BMK). Mercedes won 6 races and one of their drivers, Roland Asch, finished second in the championship. The work done was good, but not enough. It was clear to Mercedes that they had to develop the car further if they wanted to win. And they had to win, yes or yes. Since the beginning of the DTM, everyone had won at least one title, except Mercedes. Even Volvo, with a 240 Turbo with shoebox aerodynamics, had won the championship... 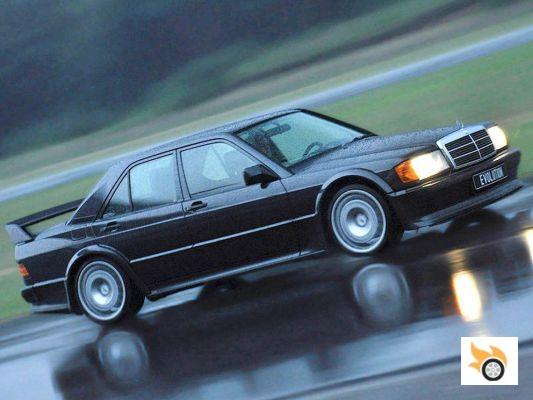 In 1989, the 190E 2.5-16 Evolution, later known as the EVO 1, was presented at the Geneva Motor Show. 502 units were produced to satisfy its homologation in Group A of the DTM. In the DTM, aerodynamics began to play an important role at that time. And if the race car had aerodynamic aids, the road car had to have them as well. Although today's DTM cars are more of a silhouette type, the rule of fixed aerodynamics remains from that era; it is set before the start of the season and can no longer be changed. 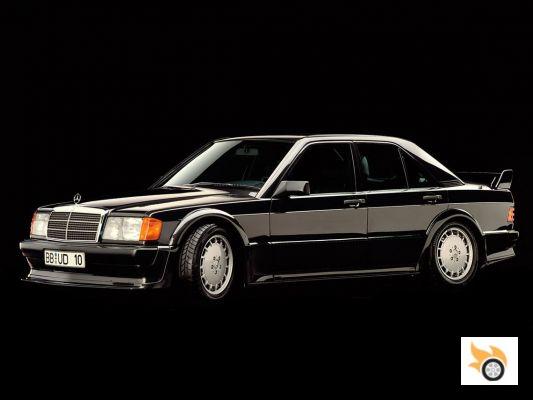 The power of the EVO 1 rises to 204 hp and is capable of 235 km/h (155 mph). Surprisingly, the specialised press of the time viewed the model with a certain indifference. The fact that it had damping adjustable in height and hardness from the passenger compartment, as well as competition brakes did not seem to attract much attention either.

Perhaps the fact that Mercedes had to start the 1989 season with the 2.3-16 instead of the Evolution (due to problems with suppliers) made the press of the time think it was a marketing operation rather than a real evolution of the car. In addition, the lack of a competitive and consistent driver, caused Mercedes to finish fourth in the championship. For a brand that started as favourite that year, it was a fiasco. So much so that in August they already started with the development of the famous Evo II. 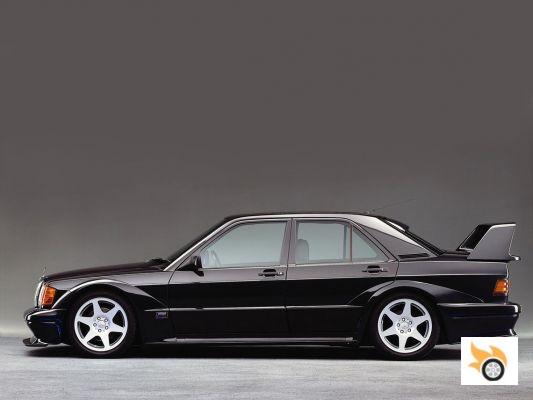 In March 1990, on the occasion of the Geneva Motor Show, Mercedes unveils the 190E 2.5-16 Evolution II. This would be the last and decisive step towards winning the DTM title. The 4-cylinder develops 235 hp at 7,200 rpm and enables the Evo II to reach a top speed of 250 km/h and 0-60 km/h in 7.1 seconds. Chassis and appendages were designed, more than ever, for competition use. Even the tyres were of unusual dimensions for a saloon at the time: 245/40 ZR 17.

The specialized press of the time praised the Evo II for being a car that demanded to be mistreated as a competition car and at the same time for being docile in relaxed driving.

The specialized press of the time praised the Evo II for being a car that asked to be mistreated as a competition car, with a very sporty driving to squeeze the full potential of its chassis and engine, and at the same time to accept a very relaxed driving, where you could appreciate the comfort and refinement to which Mercedes had accustomed its clientele. The adjustable suspension from the cabin had a lot to do with that, but also the engine, which although it shared "commercial" displacement with the first standard 2.5-16, its internal organs were very different. 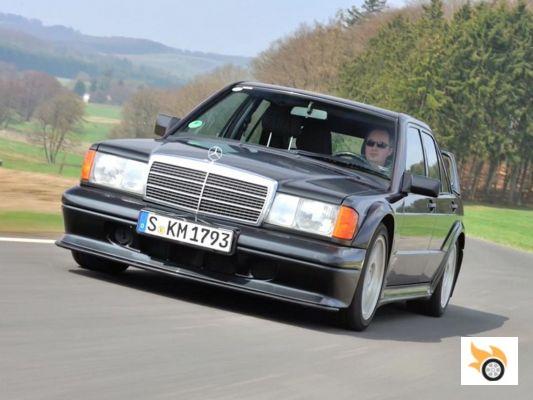 Even so, and despite all these evolutions, the DTM championship would resist Mercedes for two more seasons. In 1990 and 1991 Audi had to watch Audi take two championships in a row. A combination of bad luck and an unbeatable Audi V8 meant that it wasn't until 1992 that a Mercedes driver finally took the DTM championship crown. That driver was none other than Klaus Ludwig, the winner with the Ford Cosworth in 1988. The circle was closed. 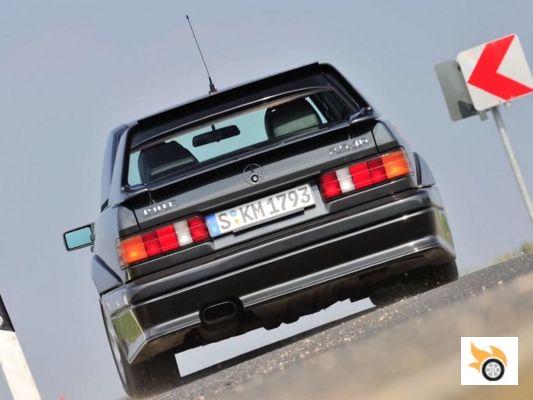 To see a 190E Evo II nowadays is very unlikely and even more so in Spain. Although there are still some left today, and luckily they are seen from time to time, it is said that in its day only 5 units arrived in Spain. It is a collector's model of those that need to be squeezed, used although most of them usually sleep in air-conditioned garages and do not go out much. Also, let's be honest, you have to assume its aesthetics when you go out on the street. How many neophytes won't have thought of a "tuned" 190E when they see it... The reality is that it's one of the most important pieces of Mercedes' recent history. The most extreme AMG models, such as the Black Series, and their striking body kits owe their existence to the Evo II, even though AMG never had anything to do with its development. The Evo II set a precedent at Mercedes for extreme models designed to be effective on the track. 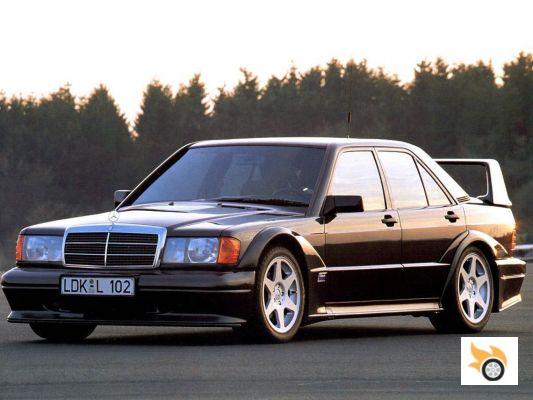 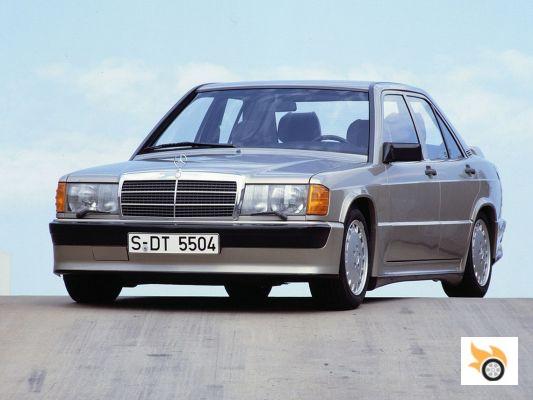 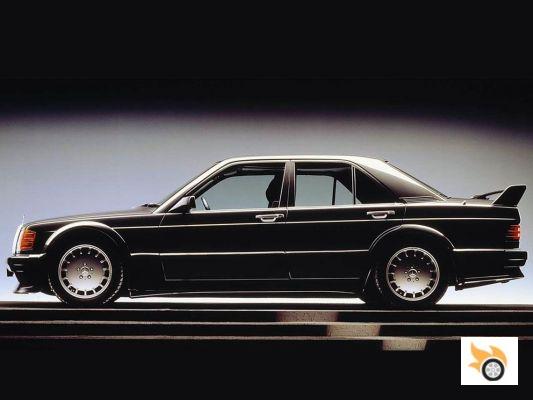 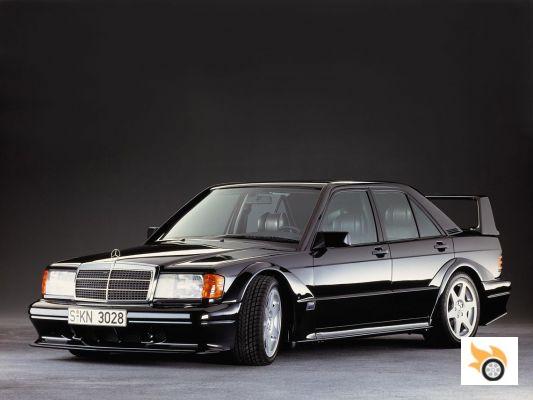 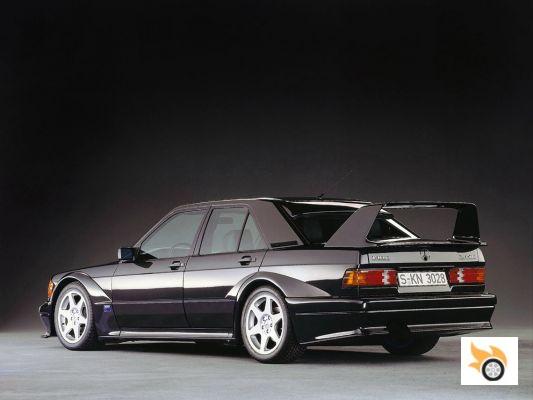 A brief introduction to Nissan's history at Le Mans

The Peugeot 402 and its Eclipse version

SEAT to base its profitability on its new SUVs