Let's start with the Brazilian-made Peugeot 208. In 2014 it was tested for the first time, only with frontal collision, and got four stars and three child stars. Now, which has also been tested in side collision, it is discovered that side reinforcements have been removed with respect to the European model, and that any manufacturer should include in our market for only 21 years, that is, "yesterday".

The consortium says that in some countries are imported French 208, which are safer than the 208 of local production.

Latin NCAP has withdrawn two stars in adult protection. The model tested has front and passenger airbags, but no side or curtain airbags. As can be seen on the EuroNCAP website, the French 208 achieved five stars in 2012, with 88% adult protection. 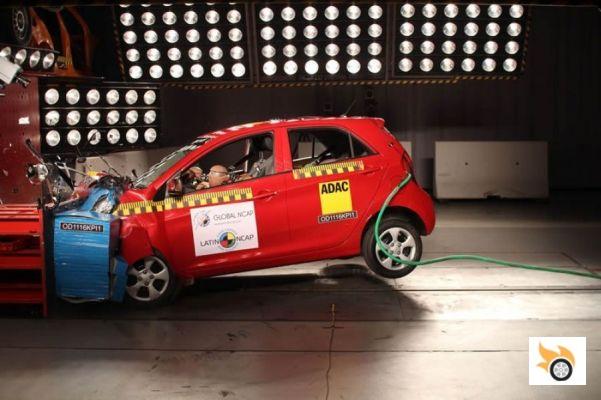 We continue with the Kia Picanto, which is made in South Korea, but leaves there without all three-point belts, and most strikingly, no airbags in its basic version. Although the body seems to have the same strength as Picanto's destined for other markets, the dummies suffer enough damage to get zero stars in this test. They haven't even bothered to do the side crash test - it already fails - even though, unlike the Brazilian 208, it does have side bolsters.

In this case Kia doesn't make a worse car in terms of engineering for Latin Americans, they just remove safety equipment. If made locally, it would probably have a buttery steel alloy, and the structure would perform worse in the event of a collision. That's what almost all of them do. If we compare the Latin NCAP images with those from EuroNCAP, where this car scored four stars in 2011, the bodywork appears to have the same structural strength.


Let's put ourselves back in the picture, gentlemen. This is 2016, not 1996, those results are understandable 20 years ago, not now, especially in reputable global manufacturers. We're not talking about a Chinese manufacturer that started making cars the other day, we're talking about PSA Group and Hyundai Kia.

Latin NCAP warns, there will be new results in August. Let's see who are the next to add their names to the list of shame.

We propose you a game, to find the differences:

The keys to the new Seat Ateca ❯