Citroën's strategy is the same, but different from that of the other automotive groups. Today, the market is made up of cloned cars, with shared platforms and sometimes overlapping approaches. Citroën, despite following the same course, does so with an unconventional or unconventional design, differentiating itself from its rivals with a much more daring design and really curious solutions such as the side Airbump.

Citroën has followed in the footsteps of its big brother, and the new C3 is a miniature C4 Cactus. With this new generation, although it has been built on the same PF1 platform as its predecessor, the urbanite grows 4 centimeters in length standing at 3.99 meters long, 1.75 meters wide, and 1.47 meters high (a little lower than the previous version). 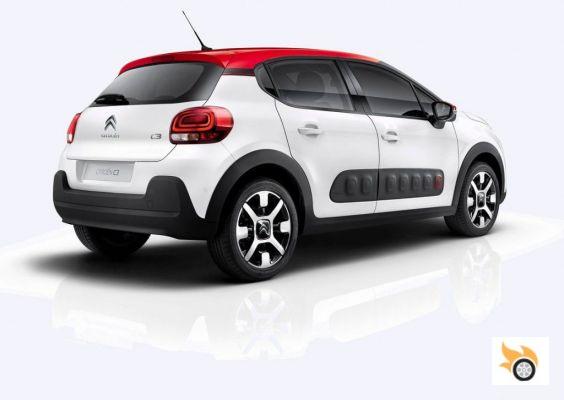 And as the design is what stands out from the first glance, it is worth dedicating a few lines even if we already know it. Its high front block, as well as its generous and rounded curves give it a "more car" image. As in the C4 Picasso and C4 Cactus, the headlights are sectioned into two parts at different levels which, together with the C-shaped LED tail lights, a roof "separated" from the rest of the body and a high waistline, give the small C3 dynamism and boldness.

The plastic areas gain prominence and make it a little more SUV. Both front and rear bumpers have the lower parts in black plastic, while on the sides we find the Airbump premiered in the C4 Cactus, which will protect the doors of small friction and bumps. The Airbump will be standard across the range except in the access model and can be combined with the body colors or go in contrast.


One of the sales pillars on which Citroën is based on customization. It has a palette of nine colours for the bodywork and three for the roof, with a choice of up to 36 different combinations. Customisation is also available on other parts of the car such as the fog lamp surrounds, wheels, interior trim and mirror covers.

Inside, the new C3 is distinguished by a design that combines simplicity and homogeneity. The shapes of the exterior Airbump are evident in the design of many parts of the interior, such as the air vents, the storage compartments, the buttons on the steering wheel and the door handles. It's all rectangular shapes with rounded edges inside the new C3. Like its big brother, it has opted to leave the buttons to the background and opt for a seven-inch touch screen that integrates most of the functions as usual in each launch of a new car. The chevron brand says it will feature Apple CarPlay, Android Auto and MirrorLink for better connectivity with our smartphones. Although it closely resembles the interior of the C4 Cactus, the C3 has opted for a dark-bottomed analogue instrumentation with white numbers and needles. There will be up to four different colour combinations for the trim and seat fabric, depending on four styles: standard, Metropolitan Grey, Urban Red and Hype Colorado.

In terms of space, its rear seats have improved passenger roominess, in width, thanks to the clever design of the rear doors. The boot will have a capacity of 300 litres, exactly the same as the previous C3.


The new Citroën C3 will have a range of engines correct for a city car. It will have three-cylinder petrol engines PureTech 68, 82 and 110 hp, with manual transmission. As for the diesel, it will be available with BlueHDi engines of 75 and 100 bhp. This model will also be available with an EAT6 automatic gearbox (torque converter). Both the 110 hp petrol and 75 and 100 hp diesel engines will be equipped with Stop & Start systems.

The new Citroën C3 2017 may have new technologies, such as the alert for involuntary lane change that works from 65 km / h and whose alert consists of acoustic and visual warnings, blind spot warning in the mirrors, fatigue detector and many more technologies. The surprise, however, is a video camera behind the interior mirror, called Citroën ConnectedCam. The camera can take photos or videos of up to 20 seconds. It has a 120º recording angle, 16 GB of internal memory and a photo geolocation system. 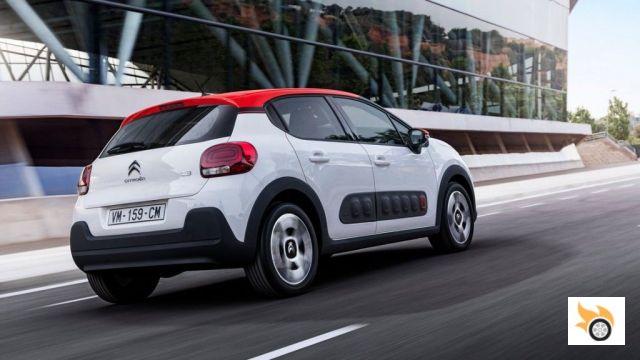 The Spanish range is structured in three trim levels:

The prices published by the brand are as follows: