Although the C-Elysée is built at the Vigo factory, it was not designed with the European market in mind. However, the car is proving to be a commercial success. And this is borne out by the more than 400,000 units sold since its launch in 2012 and the 5,800 units sold in Spain so far this year. Now, four years later, the current leader of the segment B + C Sedan in our country (followed by the Fiat Tipo and Dacia Logan) is updated to continue to maintain that position.

The front is the part that undergoes major changes. Its new bumper facilitates the integration of the stylistic codes of the brand. The new grille and chrome chevrons extend even further to merge with the headlights, optical groups that have been redesigned, gaining in volume and integrating each two chrome cones, which provide an air of modernity. This continuity between the grille and headlights increases the feeling of width of the car (although the dimensions remain intact). It is an impression that is reinforced in the lower bumper area with a horizontal air intake that joins the new decorative elements of the fog lights and daytime running lights with LED technology.

Inside, the Citroën C-Elysée's design has not changed radically, but enough to welcome a new navigation and entertainment system with 7″ touchscreen compatible with Android Auto and Apple CarPlay. The Citroën Connect Nav navigator will be available. That navigator provides real-time traffic suggestions and status via TomTom services, plus "danger zone" indications and mapping and software updates via USB.


The dashboard is more eye-catching and integrates a decorative band in the passenger area, which varies depending on the trim level. There are also new features in the instrumentation, such as a new on-board computer with white illumination, leaving behind the perhaps outdated orange monochrome display. All the materials used in the interior have been carefully chosen to achieve a more elegant image, greater robustness and easy maintenance, according to the brand. 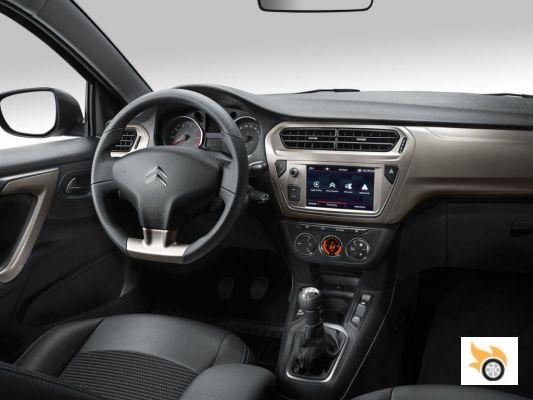 To all this we must add one of its main virtues: the interior space, which remains unchanged. Its rear seats stand out for offering a space well above its main rivals, and the trunk covers 506 liters.