At the bottom of the bumper we find LED lights with a checkered flag motif, and they have multiple uses. They integrate the fog lights, position lights, cornering lights and long-range beam. The upper light cluster is responsible for the low beam, turn signal and daytime running lights. The word "Clio" disappears from the tailgate, and the lights have been darkened.

The 18-inch wheels are of a new design.

As in the model it replaces, it can be chosen in three flavors or chassis: Sport, Cup and Trophy. The first two can be chosen with 200 hp, the latter only with 220 hp. Renault does not detail any changes in the propellants and erogan the same power they were giving. The gearbox remains the same, the six-speed dual-clutch EDC. 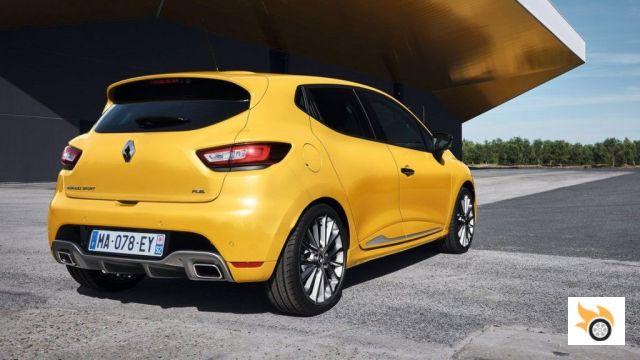 Finally there's the Trophy chassis, ready to digest the extra 20bhp, with the suspension lowered by 20mm at the front and 10mm at the rear. In addition, the Trophy can be ordered with an exhaust line signed by Akrapovič, which not only provides a sound more bronco and cañero, also helps the 1.6 Turbo engine to climb laps with joy. This exhaust system is unique in the sporty B-segment and, why not say it, in the entire B-segment.

Although Renault puts in the press release as "novelties" Launch Control, the RS Drive driving mode selector and the RS Monitor telemetric system, all that already has the Clio RS since its launch in 2013.