For the baby of the range there will not only be an upgraded electric version, but also a GTI. Power and technical data are unknown, but it is quite reasonable to think of a 1.0 TSI squeezed to at least 110 hp. Given that it already uses one-litre, three-cylinder engines, it's the easiest to shoehorn into the bay, although it also makes a modicum of sense to use the 1.4 TSI or the new 1.5 TSI EVO. Shooting high, it could have up to 150 hp.

In the A-segment the most powerful models available are the Abarth 595 and the Opel Adam S. We tested the latter a few months ago and it's the cheapest car with 150 hp in our market, the Abarth equivalent is the 595 1.4 T-Jet (neither Turismo, nor Competizione, nor Pista). In a step below we have the Fiat 500S, smart BRABUS and Renault Twingo GT. As you can see, it's a small segment also in volume.

Volkswagen's small platform can surely handle 150 hp without any problems. After the last restyling the Up! is available with two naturally aspirated engines 1.0 MPI (60 and 75 hp) and the 1.0 TSI (90 hp). In all cases the gearbox is five-speed, also in the automatic version. The useful life of the utility can be stretched until almost 2020, its successor, which there will be, can already receive the MQB in its shorter version. 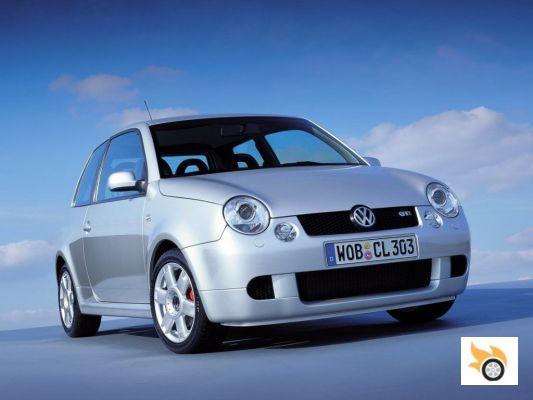 We end with a flashback, the idea is not new. The Up!'s pre-predecessor was the Lupo, which in 2000 received a high-performance street version after a one-make cup version was released. The Lupo GTI had a 1.6 16v engine that produced 125 hp, a good figure for the time and considering that turbos were not so fashionable.


In km77 they described it as stable in curves, but hard on suspension, with good performance and a six-speed gearbox -new in 2001- very effective. On the other hand it was noisy, failed in finishing details and the brakes were a little tight in a demanding use. It already had stability control, which is not common in the A-segment and even less so 17 years ago. Obviously the Up! GTI will have ESP, mostly because it is mandatory, and it is also expected to have hard suspension, a more aggressive image and a greater emotional factor.


Before the end of the year it could be in production, it will probably be presented at the Frankfurt Motor Show, the big car show in early autumn. I bet Volkswagen will squeeze the 1.0 TSI instead of using a larger engine, which would put it closer to the Renault and smart than Opel and Abarth. Mind you, speaking of pricing, it's most likely to be lined up at the top end no matter what engine it's powered by.

And what about the hypothetical Citigo RS or Mii FR? At the moment these are theoretical possibilities.

add a comment of Volkswagen Up! GTI, a reality by the end of 2017