The design of the front grille we will start to see from now on in the new cars of the brand. At the front we find LED lights for daytime running, low beam, high beam and turn signals. The fog lights are integrated into the active grille, which modifies the airflow according to the engine's cooling needs. When not so much air is needed, the flaps close and slightly improve aerodynamics.

On the side, the C-pillar, possibly the most controversial visual element of the car, is striking. Hyundai justifies this design in timelessness, that is, with less tendency to expire. The wheel arches are designed to accommodate 15- to 17-inch wheels, when several competitors can fit 18- and 19-inchers on some versions. Perhaps the larger sizes will be reserved for the high-performance N version, which we'll get to know later. 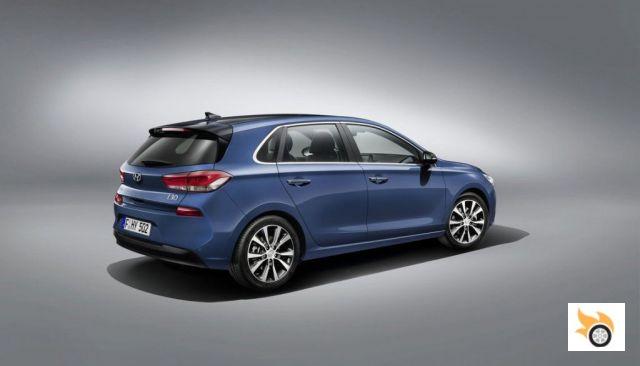 Looking at the rear, there's nothing below the waistline of the bumper. The reflectors and fog lights are halfway up, and the rear lights are in a high position. In some ways reminiscent of the rear of the Volkswagen Golf. According to the manufacturer, the design of the lights is intended to make the i30 quickly distinguishable on the road.

The body has an aerodynamic coefficient of 0.30, like the Opel Calibra.

It measures 4,340 mm long, 1,795 mm wide and 1,455 mm high normally. It has an "ECO" version with a 5 mm lowered height -improving aerodynamics- and a longer final group to reduce fuel consumption. This version is powered by Hyundai's new 1.4 T-GDi engine, which is fitted for the first time in the new i30, and is also available with a 110 hp diesel.


The engine range goes from 95 to 136 hp in both petrol and diesel. The veteran 100bhp 1.4 CVVT is the entry-level option, although the three-cylinder 1.0 T-GDi already exists at that power level. Having tested both engines in the Kia Cee'd, I applaud this decision, because the naturally aspirated engine consumes less fuel and is more pleasant to drive, although it does require more frequent gear changes.

They are still being homologated, the performance data are provisional and the consumption data have not been communicated.

The intermediate power level is the 1.0 T-GDi, with 120 hp. Both this and the 1.4 CVVT have a six-speed manual transmission and no automatic. At the "top of the range" is the 1.4 T-GDi, a natural replacement for the 1.6 CVVT (135 hp). The new engine delivers 140 hp and a maximum torque of 242 Nm at just 1,500 RPM. It is available with the new seven-speed dual-clutch automatic transmission. There is no equivalent to the i30 Turbo we tested last year.

As for the petrol engines, the 1.6 CRDi block delivers 95, 110 or 136 hp through different electronic management (and maybe some physical components, although the weight does not change). All three engines deliver 280 Nm of maximum torque, but the speed at which this force is available changes. In the case of combining the most powerful with the seven-speed automatic transmission, torque increases to 300 Nm, but is "usable" for less time. 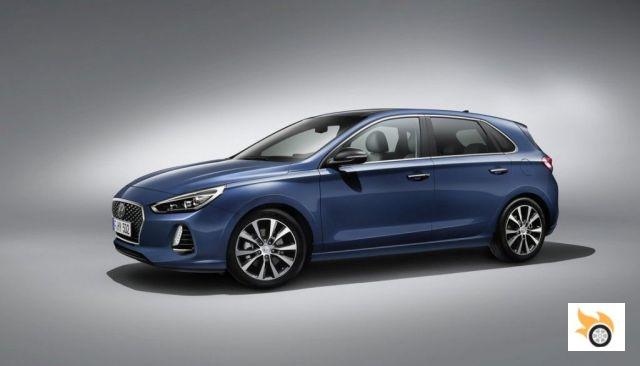 Hyundai claims to have tested the car in Chinese torture plan at the Nürburgring simulating 150,000 kilometers of use. It retains the multi-link rear suspension for better ride quality, just like the best in the segment. The steering is a bit more direct, and the brakes are a bit bigger on the front axle, 288 mm in diameter.


We've become accustomed of late to a progressive slimming down of cars through the use of better steel grades, which, incidentally, Hyundai itself supplies. In the new i30 the amount of high-strength steel makes up 53% of the body, rigidity has been improved by 22% and weight has been reduced by 28 kg. The weight of the entire car ranges from 1,169 kg for the 1.4 CVVT to 1,441 kg for the diesel with automatic transmission.

According to provisional data, the 95bhp diesel is slightly quicker than the 100bhp petrol naturally aspirated. Much more evenly matched is the 110bhp diesel compared to the 120bhp three-cylinder petrol. Finally, when comparing the 1.4 T-GDi against the 1.6 CRDi, the petrol is a few tenths quicker and achieves a higher top speed (200 km/h for the diesel versus 210 km/h).

The trunk has 395 liters (as little), has a double floor and communication with the passenger compartment through the central square.

The upper part of the dashboard is dominated by the touchscreen, which is 5″ in the basic models, and 8″ in the higher ones. The latter allows advanced connectivity with Android phones or iPhone via Android Auto and Apple CarPlay. The navigator, with TomTom technology, will work for seven years without having to pay anything. The rear parking camera view is available in any case.


There is a choice of three interior ambiences, mixing textile and leather upholstery, or leather only, with Oceanids Black and Slate Grey tones. When fitted with the electric driver's seat adjustment, the driver's seat has two programmed positions. The co-driver's seat does not have this option, but like the driver's seat, it can be heated and ventilated. I insist that the latter is an element previously exclusive to premium brands and segment E upwards. 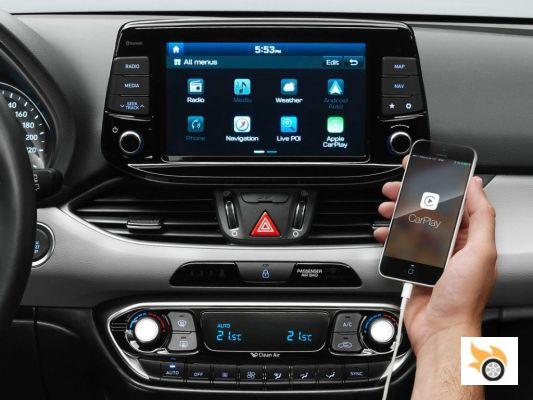 Despite having full LED headlights and this last assistant, it does not partially suppress the high beam, it is not an active matrix, it switches to low or high beam completely. As a novelty it receives a fatigue warning, which detects erratic driving patterns to recommend the driver to take a break. If all the active barriers fail and a crash is inevitable, it has seven airbags and a more resistant bodywork, it should qualify for the five EuroNCAP stars unless there's a big surprise.

Later we will know in detail the Spanish range, with versions and prices, but knowing the brand we can go ahead. The 95 and 100 hp engines will be associated with the basic equipment, and higher power will be linked to medium / high equipment. The range will not be too wide: closed engine/equipment combinations to make the choice easier. It is still a very smart buy.

Towards the technological idiotization of cars ❯