The German compact resorts to the same trick as the Renault Mégane RS Trophy-R, dispensing with the rear bench, as well as numerous insulating material. The tyres are 19-inch semi-slick, signed by Michelin. This record is less meritorious than Honda's, as this is a production car, with all its seats, and with more street-oriented tyres. Power output is similar, with the Golf GTI Clubsport S making 310bhp.

It's a shame the video is so bad - it's the official one - because of the inclusion of a lower band and music worthy of the worst video game of the 8-bit era. However, it is very interesting to see the acceleration loads that the car supports. It can "stall" at times, but more than 1G lateral is nerve-wracking, and few cars can handle that without understeering and slipping off course.

This special Golf is part of a limited series of 400 units. Among its technical features are a recalibrated ESP, front tires with a slight negative camber (to reduce understeer), a less restrictive 65 mm diameter exhaust, reinforced brakes, and a specialized Nürburgring driving mode. In addition to Normal, Comfort and Sport modes, Nürburgring mode is the sportiest mode, but with the suspension set to Comfort mode so as not to snap the driver's spine on the very bumpy German track.

Honda could take the rear seats off the Civic Type-R, remove insulation and Micheli Pilot Sport Cup 2 tires, and beat the Golf for sure. Maybe it will be the next move in this exciting time war. A lap in 7 minutes and 49.29 seconds is a better result than the one for a propulsion and all-wheel-drive car with an extra 100bhp than this one, it's a very good time, but beatable all the same. 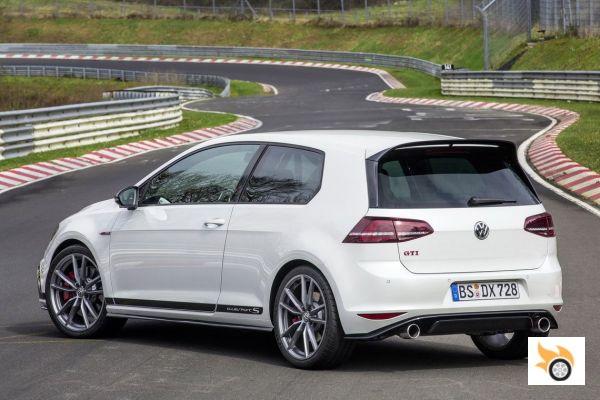