The keys to the new Seat Ateca

It has a very important challenge, to enter one of the most disputed segments at the moment. Compact SUVs, or C-segment SUVs, are growing exponentially in market share. They currently account for 20% of sales on the European continent and it was vital for SEAT to have a competitive product.

Design
The first key we are going to give you is the design. In this type of vehicle, it is vital that the car is seen through the eyes. Normally, it is positioned as a family car and the purchase decision depends not only on rational elements (consumption, engine, price) but also on what the car expresses. This is how Nissan has understood it and created the new Qashqai or Hyundai with the Tucson.

The design of the SEAT Ateca is very balanced, very Germanic. It has sought to appeal to the majority of the public and its lines are very reminiscent of those already seen in the Leon and Ibiza. Marked nerves, rounded edges and an image halfway between sobriety and sportiness. 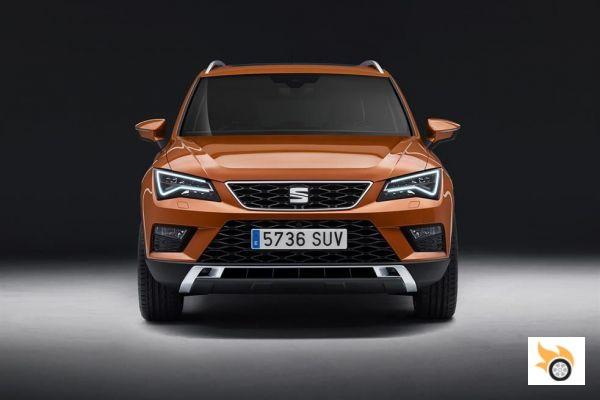 It exhibits a forceful front. At the front we find the trapezoidal grille that brings together the aesthetic DNA of the brand. In addition, in this aesthetic set are the characteristic headlights with triangular footprint that we could already see in the Leon with Full LED technology, these optics will also be optional as they are in the compact.

The side is not out of place, exhibits a line mark located above the door openers that gives the whole solidity and sportiness. In the glazed area highlights the shape of the window thanks to the use of a chrome bordering the side windows. The rearview mirror still has the radical design that showed in the Leon, angular and contained in size.


The rear is the one that leaves me the coldest. Not because I think it's ugly or unattractive, but because I miss the lines we saw in the 20v20 concept car. I miss the sporty C-pillar droop of this concept car and not the almost flattened out droop of the new Ateca. The rear, without a doubt, is the most sober area of this new model.

The new Ateca has been designed and developed at the Spanish brand's Technical Centre in Martorell. Although it will not be assembled in the factory near this Technical Center. The new Atecas will come out of a plant located in the Czech Republic where it will cohabit with a similar Skoda model.

Interior
The dashboard that we find as soon as we enter the new Ateca reminds us powerfully to that of the Leon. It is practically the same design, we do not know if they are the same measures. This indicates a significant saving in the development of the car and SEAT is undoubtedly looking for maximum profitability with this car. It is at a point of making the company profitable and that the red numbers remain a mere anecdote in its history. The dashboard as in the Leon has a conservative line, there are many plastics with soft touch and in the center we find the screen to manage the infotainment system. 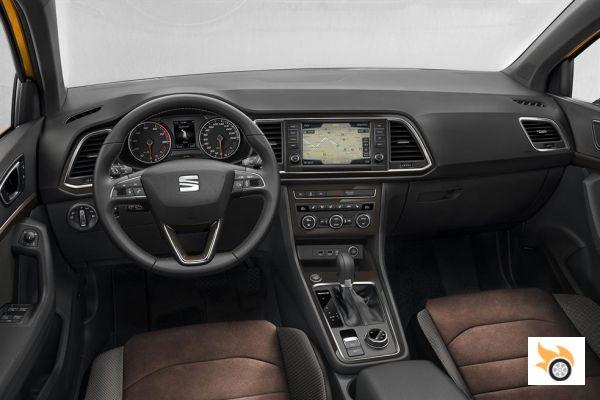 Name
As we have already mentioned several times, SEAT has gone back to its traditional way of naming cars. In this case it has chosen Ateca (very close to Calatayud, Zaragoza) a small town of 2,000 inhabitants located practically halfway between Madrid and Barcelona. That it has chosen this name is very important, as it is not a vehicle that is expected to have a low volume, but quite the opposite. The Ateca will fight for more sales than the SEAT Leon, and that's saying something. 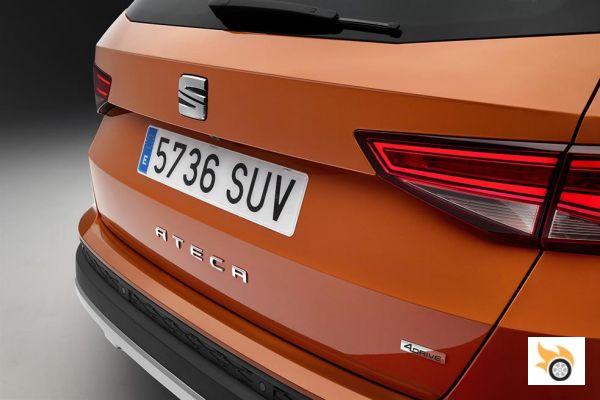 Technology
We find a multitude of driving aids. But the most notable are the blind spot detector, signal recognition system and adaptive cruise control. The most remarkable is the Traffic Jam Assist, a system to help in traffic jams, where the vehicle starts and begins to move autonomously when the caravan of vehicles resumes its march, and brakes when the traffic stops again. When the vehicle exceeds 60 km/h, the system adapts to speed control and lane keeping.

Another technological innovation that we will see in this SEAT Ateca is the Emergency Assist. It is a system similar to the one used in trains, if the driver does not give "signs of life" the system sends a visual and then an acoustic warning. If there is no response the vehicle will briefly activate the brakes and finally if the driver does not react the car stops without leaving the lane. 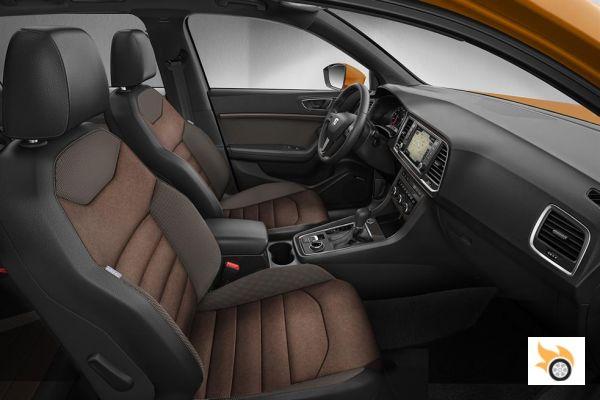 Connectivity
It is a section that was not going to be left lightly, so SEAT has bet heavily with the infotainment system Easy Connect. This system has SEAT Full Link connection with Apple Car Play and Android Auto functions. This system is coordinated via an 8-inch touchscreen. There is also a wireless charging system for mobile phones, located in the centre console. 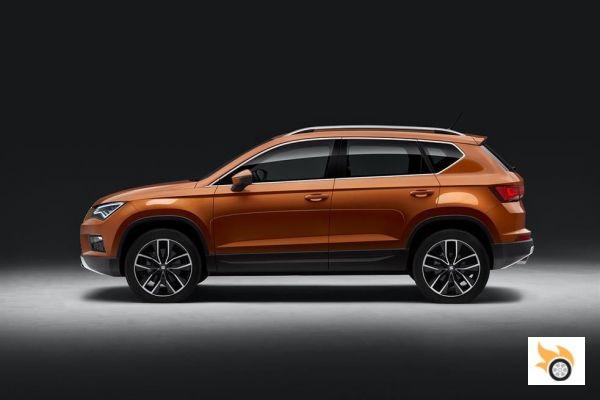 Engines
This new compact SUV will be offered with five state-of-the-art engines. All engines are turbocharged. In the petrol range we find the 115 hp three-cylinder 1.0 TSI and the 150 hp 1.4 TSI ACT with cylinder deactivation technology. And two diesel with boosted versions, the 1.6 TDI with 116 hp, and the 2.0 TDI with 150 hp and 190 hp.


The 4×2 versions are linked to the less powerful engines in both petrol and diesel, and the all-wheel drive option is present in the 150 hp petrol engine and the 150 hp and 190 hp diesel engine.

The transmissions available will be a 6-speed manual gearbox and a DSG dual-clutch automatic. The latter will be offered as an option on virtually the entire range, except for the most equipped version. 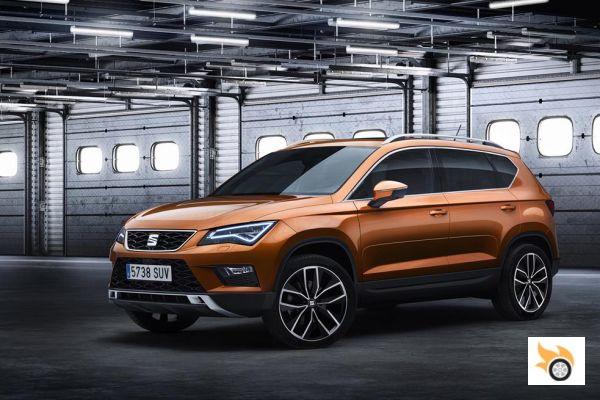 Measurements
This section has been ignored in many reviews that have emerged in recent days, but I think it is essential to locate the possible success of this model. In the range of compact SUVs has degenerated too much size. What would be the mentor of this segment in Europe, the Toyota RAV4 has grown so much that many customers have been scared off by its colossal size. It's no longer a problem of money, but of size. It's not easy to find a useful parking space for the RAV4's size or to find a free space on the street that can fit like in previous generations. This problem of "growth" has also suffered the Ford Kuga, which abandoned its concept of high Focus and has grown in a big way.

The new SEAT Ateca boasts compact dimensions, 4363 mm long, 1841 mm wide and 1611 mm high. These dimensions are closer to the European taste and that an average family demands in this type of vehicle. An interesting point where the new Ateca is positioned in a privileged place. The boot has a capacity of 510 litres, a balanced average. It is not the one that has more trunk space, but it is not the least. 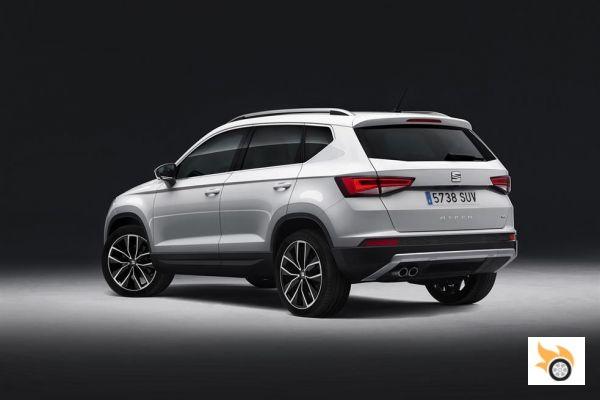 Marketing
The new SEAT Ateca is expected to arrive in July. It will go into production around spring of this year and will have a starting price of 24,000 euros (without discounting promotions or discounts).

Dealers are waiting for this model like water in May and it will be the first SUV of the Spanish brand to be marketed. The SEAT range currently includes the Leon X-Perience, a family crossover with all-wheel drive.

Indianapolis 500 beats the Monaco GP in terms of viewership ❯

add a comment from The keys to the new Seat Ateca