Based on current data, General Motors' share price on the NYSE is $51.20 billion. Tesla is already worth $51.93 billion, and Ford is already far behind. Recently a Piper Jaffray analyst changed his recommendation from neutral ($223) to overweight ($368). In other words, from undervalued to overvalued. In a few days the share price broke the barrier of 300 dollars per share.

In February 2016, Tesla's share price was half of that figure.

It is very possible that Tesla's share price is above its real market value, for sure there are brokers already betting against the company, that is, if its shares go down, they will get rich. At the moment the largest shareholder is still Elon Musk, founder and CEO, who has a little more than a fifth of the shares. If he were to sell his stake, he could stop working for the rest of his life and two or three generations of his descendants. But the entrepreneur has yet to line half the planet with solar panels, giant batteries, electric cars, reinvent the rail business with Hyperloop, conquer Mars... He doesn't have time to spend that kind of money. 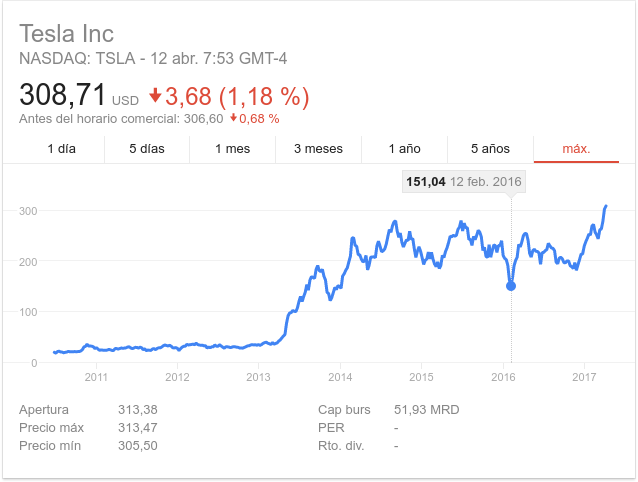 I'm afraid there's a bit of a bubble in this whole thing. Tesla has NEVER posted a profit in a full fiscal year, and in 2016 it produced about 80,000 cars, a far cry from the nearly 10 million that General Motors did. Tesla has one factory in the US (Fremont, California) and the battery gigafactory (Reno, Nevada). How many factories does General Motors have? What dealer network does one or the other have? Anyway, the comparison is totally odious.

True, General Motors needed Uncle Sam's dollars to avoid bankruptcy eight years ago, so Goliath has its weaknesses, but the lesson is supposed to have been learned. GM is paying less and less attention to unprofitable (or unprofitable) businesses, which is why it is selling Opel and Vauxhall to PSA. Goliath all but abandons Europe, remaining a trickle-down exporter of Cadillacs, Corvettes and Camaros. Still, it's hard to objectively justify TSLA's share price against GM. I hope the same thing doesn't happen that happened back in the day with the Tulips.


Tesla's position is far from solid, it still hasn't sold its favored Model 3 massively, nor has it managed to increase its production volume from 80,000 to 500,000 units a year. If someone wants to invest in Tesla, that's fine and dandy, but be aware that sometimes the stock market is as rational as a teenager about to touch his first breast.

Deutsche Bank recently warned that rising interest rates will complicate further growth in U.S. sales. The Financial Times reports that credit defaults are rising (what does that remind us of?). If the situation persists, it will affect manufacturers based on their soil. Therefore, before putting money into the American automotive sector, you have to think with a cool head. This is coming from someone who bought 400 euros worth of GM shares just before the bailout; they became worth nothing and less. Hey, but he who doesn't risk, doesn't win. Tesla is synonymous with risk, not a safe bet, but alas, if it turns out well...