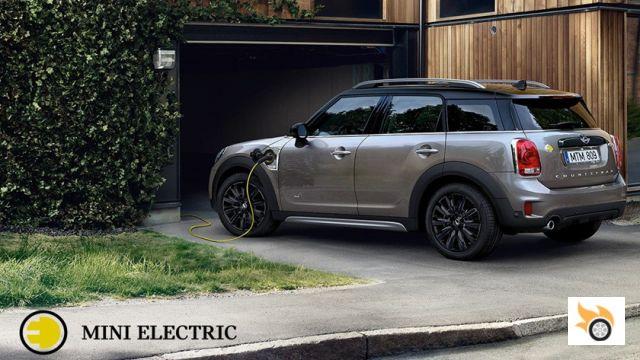 It is a model that will be very similar technically (and possibly also in price) to its German cousin the BMW 225xe iPerformance Active Tourer. The MINI Cooper SE Countryman ALL4 hybrid system consists of a three-cylinder petrol engine - with a maximum output of 136 hp and TwinPower Turbo technology - and a synchronous electric motor. Together they generate a total output of 224 hp, enabling the car to go from 0-100 km/h (62 mph) in 6.8 seconds. The petrol engine is the same as in the BMW 118i and 218i. Power from the combustion engine is transmitted to the front wheels via a 6-speed Steptronic transmission. The electric motor transmits power to the rear wheels via a two-stage single-speed transmission. In practice it has all-wheel drive, hence the "ALL4".

Let's qualify these figures, we are facing a plug-in hybrid vehicle, so consumption and emissions are certainly misleading homologated. The fuel consumption per 100 km is considered taking as a starting point that the car runs with the electric motor until the autonomy of its battery is exhausted, the theoretical autonomy and not the real one, so there we already have a first nuance, because most likely we can not get a figure of real autonomy equal to the theoretical one. To this we must add the fact that in the homologation test the petrol engine hardly works, but in reality it can triple those figures.

When the car is started, the electric motor is activated first and then the combustion engine will come into action depending on the power demanded. When a driving speed of 80 km/h is reached, the combustion engine is smoothly activated. The eDRIVE button allows the driver to continue driving with the electric motor alone after this point if preferred: in MAX eDRIVE mode, the MINI Cooper SE Countryman ALL4 reaches 125 km/h in all-electric mode.


The energy used by the electric motor is stored in a high-voltage lithium-ion battery under the rear seat with a capacity of 7.6 kWh.

It can be charged from a conventional household socket or, for greater power input, from a wallbox or public charging station. It takes between 2:15 and 3:15 hours to recharge, depending on the charging power; the time needed to recharge the battery will be inversely proportional. The battery is guaranteed for six years or 100,000 km ex works.

Due to the presence of the electric motor and high-voltage battery at the rear of the body, the rear seats are higher than in conventional versions of the MINI Countryman, the fuel tank is 10 litres smaller than in the other versions at 35 litres, and the luggage compartment loses some of its capacity from 450 to 405 litres.

In addition to model-specific design elements, such as the "E" badge on the front grille, side indicator mouldings and yellow "S" entry mouldings, the 17-inch light alloy wheels with Light Spoke design are another distinctive feature unique to this model. Inside, hybrid-specific displays and the eDRIVE button showcase the distinctive character of the MINI Cooper SE Countryman ALL4. The manufacturer has not provided any images other than the one at the top of this report.

In terms of pricing, it will probably be slightly below that of the BMW 225xe iPerformance Active Tourer, at around 38,000 euros.

If we look for similar options to this MINI we can find models like the Kia Niro or Toyota CH-R, although they are not plug-in, but have a size and a very similar approach to the MINI. If we go up a step in size, we have the Mitsubishi Outlander PHEV or the Toyota RAV4 Hybrid -the first is plug-in and the Toyota is not- which are larger and more spacious, but with a price very similar to the MINI. Another model we could compare is the Honda Jazz Hybrid, which is cheaper, less powerful, and is not a crossover but a small minivan, but has very similar dimensions to the MINI.

add a comment from MINI presents its first plug-in hybrid