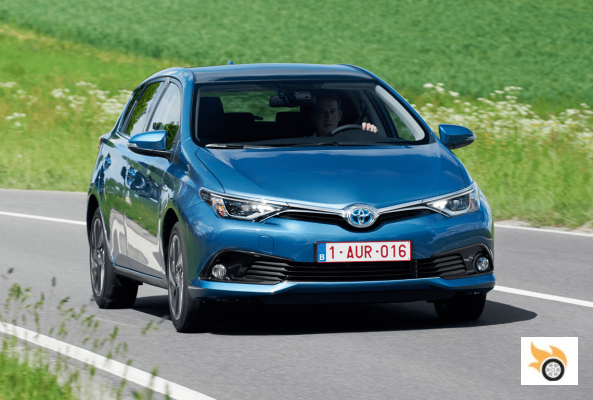 In addition to the changes in design, the Japanese compact renews some of its mechanical and improves in quality of finishes and safety equipment. It is still available in five-door version and family bodywork, called Touring Sports. In both cases has a completely new petrol engine, two diesel and hybrid.

The success of this latest variant of the Auris on our continent is more than evident, since more than half of the units sold of the model incorporate this technology. Such figures have led it to become the best-selling hybrid in Europe and, following this line, aims to grow considerably in the Spanish market. 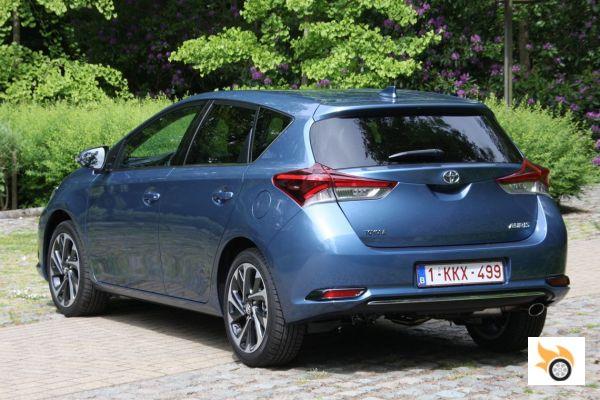 As you can see, Toyota has not opted for a metamorphosis of the model in terms of appearance. And we are not talking about a new generation but a facelift of the model we already knew. The front end features new chrome trim in the logo area, which is now more prominent. Optionally, the vehicle can now incorporate Full LED optical groups, which are added to the daytime running lights, also LED type.

Among the changes that affect the appearance of the vehicle is also the new bumper, which protrudes slightly more than before and gives the Auris a greater visual presence. The lower grille has grown, extending from side to side, while the fog lights have been moved further towards the edges of the car. When viewed in profile, the slight increase in both overhangs is most noticeable, as well as the presence of the shark-fin roof antenna. Toyota designers have also renewed the 16 and 17-inch wheels available with two-tone variants, which give a colorful and original aesthetic touch to the car.


The rear has also received some changes. One of them is in the bumper, more forceful than in the previous Auris and with a new chrome strip that accentuates its width. The rear lights with LED technology and the lower reflectors located at the ends close the novelties in this area. The choice of body colours increases with the arrival of new Denim Blue and Navy Blue. 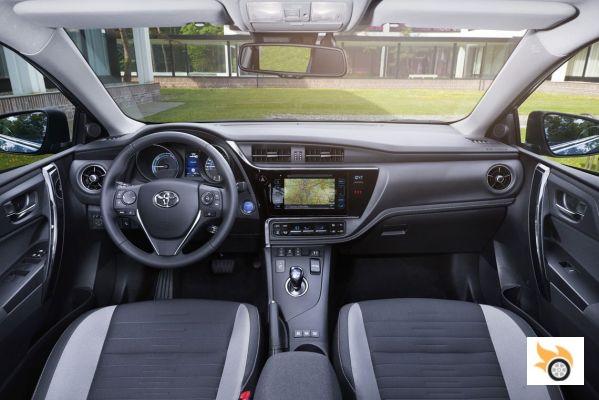 As we settle into the driving position we can see a simplification of the controls, which makes its use is somewhat easier and more intuitive. Firstly, there's the new instrument panel, with a more attractive design enhanced by the presence of a new 4.2-inch TFT colour screen between the dials depending on the trim.

The dashboard has a more curved shape than before and the centre column is dominated by a 7-inch touchscreen with capacitive buttons. While the infotainment system is easy to use, the sensitivity of the screen can be improved, as it is not as responsive as it should be when we want to move around the map during navigation. Also, the response of the capacitive buttons is a bit slow. On the other hand, there has been an improvement in terms of finishes, which is especially noticeable in the material used in the dashboard panels, which are softer and more pleasant to the touch than before.

The new 7-inch screen takes centre stage on the dashboard.

The renovation can also be seen in the air vents, the gear lever area, the door handles and the design of the upholstery. In terms of interior space there are no differences, so it has a spacious front seats, with a driving position that allows you to easily find the best position at the wheel. In the rear row two adults of considerable height can fit without any problems. The load capacity is good, with a volume of 360 liters in the compact body that can grow up to 1,199 liters folding the rear seatbacks. If we choose the family version Touring Sports, this space grows to 530 and 1,658 liters, respectively. 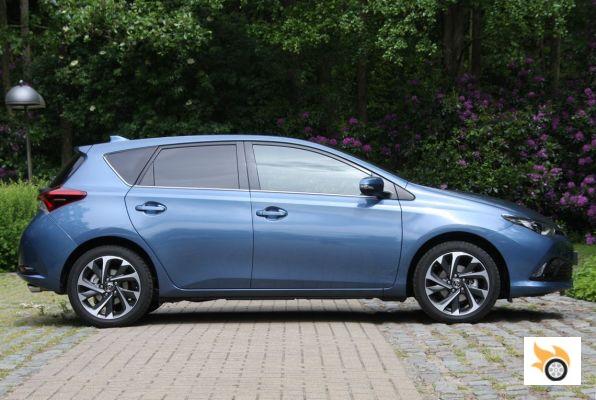 From the mechanical point of view, the most important new feature is the arrival of the 1.2T petrol engine. This four-cylinder engine with turbocharger and a specific direct injection system makes its debut on the Auris and has a power output of 116 hp and a maximum torque of 185 Nm between 1,500 and 4,000 rpm.

With this engine, Toyota's revamped compact is capable of accelerating from 0-100 km/h in 10.1 seconds while its recovery time from 80-120 km/h in fifth gear is 13.7 seconds. As for top speed, it can reach 200 km/h. The Japanese manufacturer's engineers have put special emphasis on fuel economy and low emissions throughout the range. For this reason, with the 1.2T they have achieved a homologated average of 4.8 l/100 km and CO2 emissions of 112 g/km. 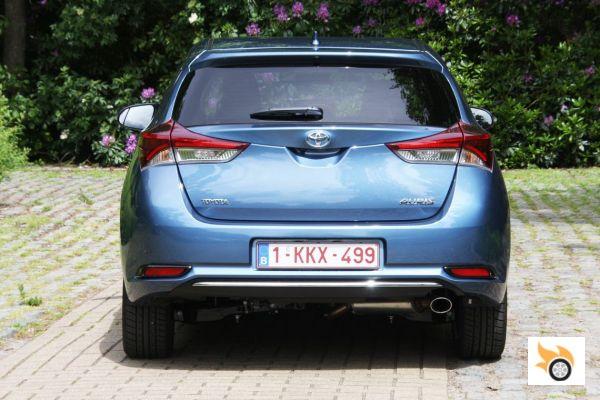 Toyota has made no mechanical changes to its hybrid variant, which continues to combine a 1.8-litre VVT-i petrol engine and an electric motor that together produce 136 hp. This power output takes the Auris Hybrid to complete the 0-100 km/h in 10.9 seconds and to obtain a top speed of 180 km/h. Its strong point is undoubtedly fuel economy, with an average fuel consumption of 3.5 litres and CO2 emissions of 79 g/km. The electric motor operates from a standstill until approximately 50 km/h, when the petrol engine kicks in.

Toyota's confidence in this mechanical alternative is so high that it expects it to account for 60% of Auris sales in our country. One of the ways to help meet this ambitious goal is its price repositioning, as it can be even cheaper than the petrol version depending on the chosen finish. All engines are associated with a six-speed manual transmission except the hybrid version, with automatic transmission, an alternative also available with the 1.2T. In relation to the manual versions, I found the position of the armrest uncomfortable. It is very common to hit it with the elbow when changing gear because it is too far forward. 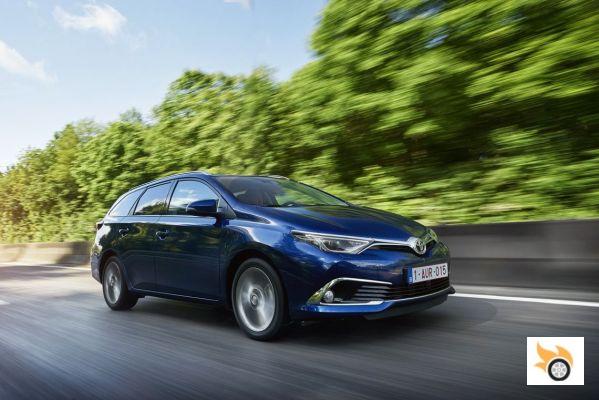 In order to achieve a certain evolution at a dynamic level, the Japanese brand has also revised both the steering and the suspension system. In this sense, the steering feel is just as precise as before but slightly softer, making it more comfortable to drive. The differences with respect to the suspension are noticeable in the absorption of minor road irregularities, which are less noticeable than in its predecessor thanks to a more effective camber. Once again, the aim was to increase the level of ride comfort and this has been achieved, although without radical changes.

During the presentation of the model, which took place near Brussels, I was able to test two engines. The first was the new 1.2T petrol engine. It responds very well from very low as soon as we put our foot on the accelerator and its most evident power delivery is perceived from 1,600 turns, extending very progressively until 4,500. It is quite quiet in general although the hiss of the turbo comes too much to the passenger compartment. At the end of the 80 km trip I was able to do, where urban roads, intercity roads and motorways with no gradients predominated, the average registered by the on-board computer was a very reasonable 6.2 litres.

I also had the opportunity to drive the Auris with the 112 hp 1.6 D-4D engine, which gives good results at low revs but loses some momentum at higher revs. Here consumption was 5.9 litres, slightly lower than its petrol counterpart. On the other hand, the Stop&Start system has been revised and the result is a slightly quicker start than before and less noticeable. 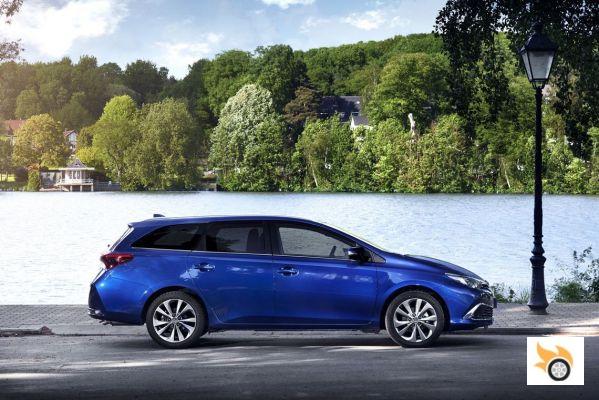 The Spanish range of the Auris is made up of four trim levels. The Business is the most basic and, according to the brand, is more oriented to fleets. It is followed by Active, Feel! and Advance, which is the top of the range. Prices, excluding PIVE plan, range from 16,190 euros with 1.2T engine and Active finish to 22,800 euros with mechanical 1.6 D-4D and Advance finish. One of the main technological equipment innovations is the new Safety Sense package which, for 700 euros, includes a pre-collision system (which can automatically brake the vehicle to avoid an impact with the car in front), lane departure warning, intelligent high beam control and traffic sign recognition.