The Peugeot 308 S is a model manufactured in China and destined for the Chinese market, available in both hatchback and SW estate body styles. However, the public will remember Peugeot at this show for the presence of the 308 R Hybrid, a Peugeot Sport creation with 500 hp and 730 Nm.

Aesthetically, to say that the front end is aggressive would be an understatement, with its two huge fake front air intakes the 308 R Hybrid is very bad ass. Interestingly, from the front it reminds me a lot of the Volvo S60 Polestar. As for the rest, it has the styling cues of the brand's latest concept cars: a matte black rear in contrast with a strong tone on the rest of the bodywork (a French blue in this case) and flared wings. At the rear is the bumper that retakes the forms of air intakes as if they were air extractors. On board, the passenger compartment has four seats and a central console that separates the passenger compartment in two along its entire length.

On the mechanical side, Peugeot Sport has set our teeth on edge. The 308 R Hybrid is equipped with a 270 bhp 4-cylinder 1.6 THP petrol engine combined with two 85 kW (115 bhp) electric motors. Each axle has an electric motor. The set of engines is associated with a 6-speed automatic transmission.


Impressive as these figures are, the final architecture of the 308 R Hybrid is evidence that it is a concept car. Despite a very flattering power-to-weight ratio of 3.1kg/hp, Peugeot admits that the weight distribution is 60% front axle and 40% rear. The 3 kWh lithium-ion battery is located at the rear, under the two rear trunks, where the 50-litre fuel tank would normally be. This has been moved to the boot, above the rear electric motor. 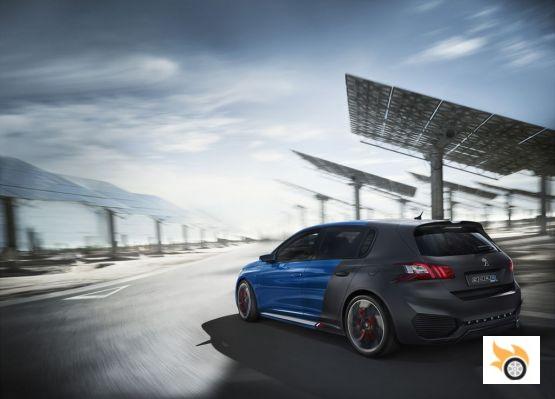 As for the rest, Peugeot announces 4 driving modes available. The Hot Lap mode delivers 500 bhp and 730 Nm to achieve the best lap time. The Track mode "makes do" with 400 bhp and 530 Nm, where the heat engine and rear electric motor act mainly, the front one waking up from time to time as an overboost. Road mode delivers 300 bhp and 400 Nm for on-road use. Here, the 1.6 THP does most of the work, while the rear electric motor is used on an ad hoc basis. The front electric motor is permanently switched off, which is unnecessary dead weight. Finally, the ZEV (Zero Emission Vehicle) mode is the pure electric driving mode. Obviously, with a 3 kWh battery, Peugeot is not revealing any range figures.


Will we see anything of this 308 R Hybrid in a production model? Nothing is less certain. While Peugeot will have a 308 Hybrid Air, a priori next year, we will not see such a radical sports version. We are still waiting for confirmation that the 308 R will become a commercial reality.