The 1.6 CDTI Biturbo engine has two turbochargers that operate sequentially. At low revs it has a low inertia turbine, which is complemented by a larger turbine for higher demands. Thus, the engine doesn't have as much turbo lag, is more progressive, and can deliver more power. A decade ago some manufacturers still needed a 2.2 to get that power.

According to Opel, it delivers 350 Nm at just 1,500 RPM, nothing to envy the previous generation 2.0 CDTI, nor the 150 hp 1.9 CDTI of two generations ago (both single turbocharged). Accelerates to 100 km/h in 8.6 seconds, recovers from 80 to 120 km/h in fifth gear in 7.5 seconds and reaches 220 km/h. This performance is better than that of the Astra of identical power of the last two generations. The Astra has slimmed down a bit, it's less flabby. 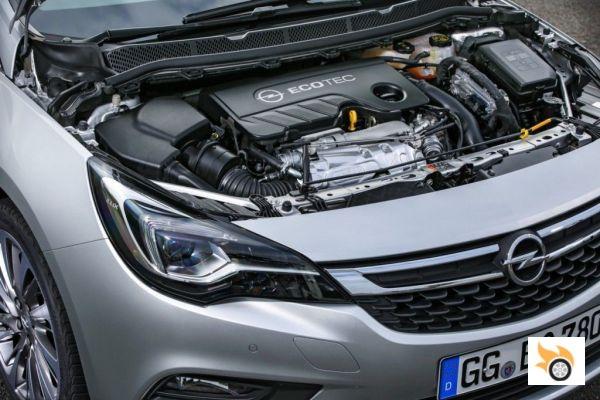 In terms of fuel consumption, it's rated at 4-4.1 l/100 km, even under the humorous and unrealistic NEDC cycle norms. The 150 hp 1.9 CDTI (Z19DTH) was homologated almost 50% more, but the difference in real consumption will be less evident. Opel promised to give more realistic fuel consumption figures -complementing the official ones, according to EU regulations- but in this case this is not the case. In any case, if it reaches 5 l/100 km it will be a real not bad.

Before the economic crisis began, it was much more common to see petrol cars on our roads with an equivalent power figure. Now it's the top of the range. In this generation of the Astra the petrol cars range from 110 to 160 hp.