More SUVs were sold in Europe in 2015 than compacts or subcompacts.

In 2014, which wasn't that far off, those percentages were 19.81% share for SUVs, 22.73% for subcompacts and 21.3% for compacts. But SUVs have grown by 24% in 2015 compared to 2014, while compacts and subcompacts have only grown by 6%. So, little by little, SUVs have already passed yet another milestone. In other words, practically every fourth car sold in Europe last year was an SUV or crossover.

Within the SUV macro-segment, the most voluminous is the compact size, which is clearly led by the Nissan Qashqai, with a volume of 1.28 million units. In second place is the Volkswagen Tiguan, and third the Kia Sportage. This segment has grown the least, only 8% compared to 2014.

With low fuel prices, the share of SUVs will not fall, you are warned

In second place we have the small cars, where the Renault Captur dominates, with 1.20 million units and a growth of 38%. In second place is the Opel/Vauxhall Mokka and the Peugeot 2008. Wow, the Nissan Juke has finally been dethroned, the competition has needed five long years for that.

More striking is the beastly growth of the mid-size, 470,000 units and a 42% year-on-year growth. Here the leader is the Volvo XC60, and watch out, it is a premium model. The supply of this type of SUV is more abundant in high-end brands than in the generalist ones. The XC60 is followed by the Audi Q5 and the Mitsubishi Outlander, which by the way is doing very well with its plug-in hybrid version.

Finally we have the E SUV segment, led by the BMW X5, which "only" has grown by 27% and the volume was 243,000 units. The Range Rover/Range Rover Sport and the Volkswagen Touareg complete the podium. In this size the offer of generalists is minimal, as we are talking about very high-end cars. At the end of 2016 we will be able to talk about the largest size, as the F SUVs hit the roads. 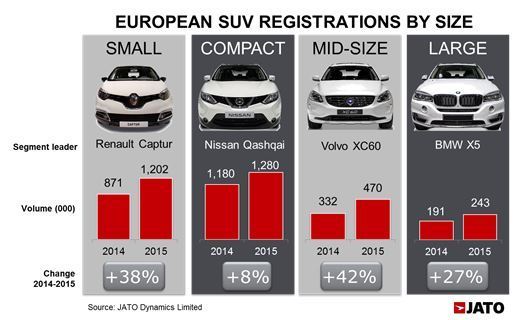 The manufacturers that place the most SUVs on the market are Nissan, in second place Renault, and in third place Volkswagen. Out of every 10 SUVs sold in Europe, just over one is from the Nissan brand, a total of 376,000 units or a share of 11.8%. So, is there still anyone who wonders why so many manufacturers are so committed to SUVs? It is the new fashion, the new aspirational car, the new sports car, the new MPV, the new saloon. When you mix so many things together, you can't have an outstanding result in a particular field, or so we engineers tend to think.

In Germany it is mandatory to pass the review of the Volkswagen TDI "tricked". ❯

add a comment of More SUVs were sold in Europe in 2015 than compacts or subcompacts.