I know that some will be thinking if there is any change at the technical level; because there is not. It still offers a single hybrid version that combines a 2.5-litre petrol engine with an integrated generator, a battery and an electric motor. In the case of choosing the four-wheel drive version, we will have two electric motors, one for the front axle and one for the rear. The combined power is 197 hp, achieving CO2 emissions of 118 g/km and a homologated consumption in mixed cycle of 5.1 l/100 km thanks to which it is exempt from registration tax in the basic versions.

Since it is a hybrid, it receives the ECO label from the DGT and, consequently, it can drive in the BUS-VAO lanes (when indicated), a reduction in the price of parking meters, the possibility of driving on high pollution days without looking at the license plate number, etc. Compared to a diesel competitor, all this is interesting.

With this version, there are now six available for this model. Ordered from least to most equipment are: Eco, Business, Sport Edition, Executive, F-Sport and Luxury.

With this version, Toyota's premium brand intends to scratch a greater number of sales to its competitors. So far this year, the best-selling of this segment in Spain has been the Mercedes-Benz GLC, with a total of 1,164 units during the first two months of the year, followed by the Audi Q5 and Range Rover Evoque. The BMW X3, the Jaguar F-Pace and the Volvo XC60 can also be considered competitors of this Lexus. Among all the rivals, although the Lexus NX is not the best seller, it does have pretty good sales figures - 433 units sold and an increase of 13.9% in the first two months of 2017. The Lexus NX is by far the brand's best-selling model, even though the compact CT 200h is considerably cheaper and uses considerably less petrol. 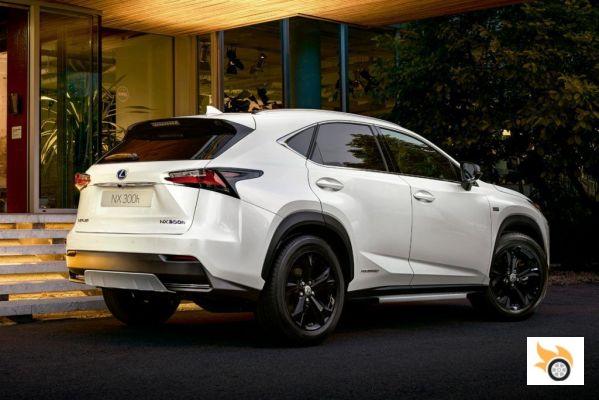 This Sport Edition version is only available with front-wheel drive and is priced at 47,100 euros. The range-entry ECO version has a starting price of 39,750 euros. If we compare its rivals with petrol engines of similar power and traction to a single drive axle we have the BMW X3 sDrive20i is priced at 45,200 euros and the Mercedes-Benz GLC 250 4MATIC (there is no version of two-wheel drive) 52,902 euros. Both the Jaguar, Volvo, Audi and Range Rover gasoline engines with a power greater than 240 hp, are significantly more expensive than the Lexus. The most similar in terms of power and price to the Lexus is the BMW X3, which is equipped with a conventional petrol engine and in whose range we can not choose any hybrid version, the rest of the competitors either escape price, or can not be chosen with the same mechanical characteristics.


The Lexus, therefore, is a really interesting option in this segment with a very competitive price and a very complete standard equipment.

Lexus CT 200h, in front of its latest restyling ❯