Nissan Micra BOSE Personal Edition, a leap to the top of the segment

Taking advantage of the pull that have the exclusive editions in this segment, the Japanese brand has decided to launch a limited edition of the new Micra, which has been presented at the recent Geneva Motor Show. It's a way of telling us that the Micra aspires to a higher cache than the model it replaces, focused more on the lower end of the segment. This limited edition is called the BOSE PERSONAL® EDITION in honour of the sound equipment company's partnership with Nissan. The Renault Clio can also be fitted with BOSE speakers, although the system is a step down.

As the name suggests, it incorporates the BOSE PERSONAL® audio system, with two BOSE UltraNearfield™ speakers integrated into the driver's headrest, a rarity in the segment. This technology has been designed by the BOSE engineering team and offers a unique and immersive 360º custom-made listening experience. The sound system is made up of four additional speakers and promises to deliver better sound quality than other alternatives, according to Nissan.

The sound can also be customised to suit the driver's tastes thanks to the BOSE PersonalSpace control function integrated into the new Micra's 7" touchscreen audio setup. In other words, the system can be configured so that the sound is concentrated on the driver's side or in the entire car, which is not a novelty, but it is not common in the segment either.

This version can be chosen in two exterior colours -Enigma Black or Gunmetal Grey-, both complemented by a customisation programme in Energy Orange, making this version the most customisable of the Micra range. Ultimate exterior customisation includes interior and exterior customisation in Energy Orange, front and rear bumper trims, door mirror trims, side mouldings and 17" Sapphire alloy wheels. Exterior finishes also include a black and orange centre bonnet and roof vinyl, as well as a unique "BOSE PERSONAL®" badge on the B-pillar of the New Micra.


All of these personalisation elements are factory fitted (Flins, France).

Inside, we find a specific upholstery for this version combined with a series of details on the instrument panel, the gearbox lever, the floor mats and the door sills. 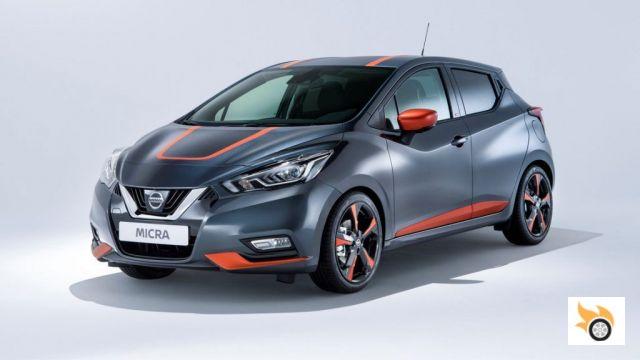 
The Nissan Micra BOSE PERSONAL® Edition will be available with both a three-cylinder, 0.9-litre, 90 PS turbocharged petrol engine and a 1.5-litre turbodiesel engine with the same power output. This limited edition will be available from the summer. At the moment, Nissan has not disclosed definitive data regarding its price, but logic indicates that it will be a slightly higher price than the Tekna version at the same engine.

add a comment of Nissan Micra BOSE Personal Edition, a leap to the top of the segment