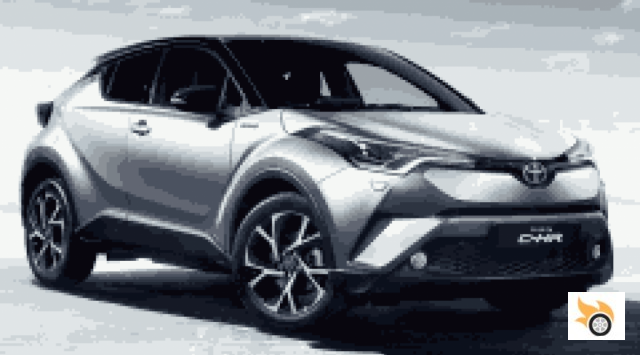 In the second spot, the C-HR sneaks into the legendary Steet Fighter II by CAPCOM, one of the games that made the most money fly in the arcades for people of my generation, or that made the most Super Nintendo controllers suffer. More than one will remember a stage in which our fighter had to smash a car -if I remember correctly it was a Lexus LS- but the C-HR doesn't suffer any damage. I'd better not bust the ending if you haven't seen it.

It's at the end of these spots that you find the slogan "Fun to drive. Again. Few will remember anymore, but the "Fun to drive" slogan was used in Toyota advertising in the 80s and 90s, when things like the MR2, Supra or Celica existed, and it means "fun to drive". "Again" means "again". And more than a few of you are wondering what the hell that has to do with the C-HR. I'll give you a preview of the conclusions of having tested this car for a whole week and in less friendly conditions than at the presentation.

The C-HR is a crossover that looks like a crossover, but drives like a compact. Practically all my clichés about the segment I've had to eat: it doesn't feel heavy and clumsy, cornering is much better than expected, fuel consumption is comparable to that of a non-SUV diesel, etc. Is the C-HR a fun car to drive? Certainly, when compared to what's on offer in its class, yes, it is. It's one of those few models that, like the Mazda CX-3 or CX-5, make this segment more digestible for those of us who really enjoy driving cars.


For those who doubt the plausibility of what I say, you have to look at the design conditions of the C-HR, with a lowered center of gravity, independent suspension and the requirement that it is pleasant to drive, predictable for the driver, and that it does what it is told to do. I stand by my initial impressions, but I'll understand anyone who doesn't believe me. One thing is clear, Toyota wants to slowly regain its lost reputation as a manufacturer of fun cars. First it was the GT 86, then the return to rallying, now it seems that more attention is being paid to the sensations in models that, by their conception, are not intended to break lap times on the track and fit what the modern clientele asks for (that is, that sell well).

In my professional opinion I can't say in any way that it is a minimally misleading advertising (fiction apart from winning Mr. Bison). We'll all agree that a GT 86 is a lot more fun to drive than a C-HR, but they clearly don't compete for the same customer base. There are Toyota competitors that want to give the same message about the driving feel of their SUVs and their crossovers, but you don't get the same impact.


One final question. After watching the Japanese ads, compare it with the European one:

Which one do you feel more identified with? I'm pretty sure...