It was 1973, in the middle of the oil crisis, when Volvo decided to cease production of the 1800 series, that beautiful coupe we have already talked about. From that moment on, Volvo had no luxury coupé to meet the demand in this segment, when German brands such as Mercedes with its 280C or BMW with its legendary 3.0 CS, and American brands such as Cadillac or Lincoln, were competing for sales in the United States, a vitally important market.

For this reason, Volvo's CEO, Pehr G. Gyllenhammar, decided that he had to have a vehicle in this segment, and urgently. He picked up the phone and called Jan Wilsgaard, Volvo's chief designer at the time (remember he was Volvo's first chief designer, designer of the Volvo Amazon). He commissioned him to design a luxury coupe that would meet Volvo's standards. Jan had to act fast, as the development couldn't take long. He started designing the sketches, based on the new styling line started on the 242, and when he had the design defined, it was time to turn it into reality.

Instead of starting from scratch, as he would have done with any other model by making a model, due to time constraints, he opted for a quicker way: he borrowed a Volvo 164 and sent it to Sergio Coggiola, a designer from Turin, to turn it into a coupé. Let's remember that at that time Italian design was a big seller. As a good craftsman, Coggiola took the four-door 164 and following Jan's sketches, removed two doors, lowered the height of the roof, to which he added black vinyl, and on the C-pillar he placed the heraldic symbol of Sweden: the three crowns. The first prototype of the 262C was born.


As we have already said, it was presented at the Geneva Motor Show in March 1977, and its commercialization began a year later. Since it was a niche car, the quantities would not be huge, so it did not make sense to adapt the production line of the Gothenburg factory. As mentioned, the Italian design sold, so Carozzeria Bertone was commissioned to assemble the car.

Parts kits were shipped to Turin, where the bodies were modified, painted and assembled to produce finished vehicles. On the production car, the three crowns were replaced by a larger one, one of the few differences from the initial prototype. A small emblem at the bottom of the front wings indicated that Bertone had built the car - a powerful selling point. 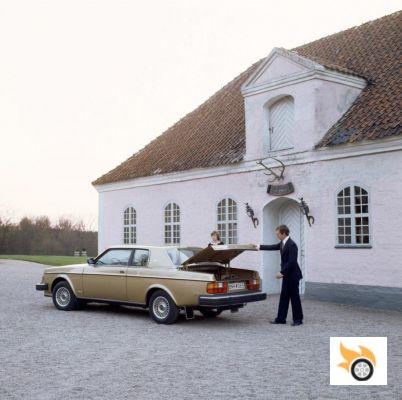 As you can see in the photos, the predominant design is angular, with very square shapes, a stylistic line already started in the 240 series, and which marked a new trend in Volvo. During this period it clearly distinguished itself from its competition, being known worldwide for its "square" design, a subject covered by Javier in this article. This gives it a robust look, which we assume they want to convey, to reinforce that image of safety that Volvo always takes care of.

The front is clearly dominated by those rectangular headlights (in the American version were replaced by double rectangular headlights), the large central grille, and those huge prominent bumpers, which seem to hold everything. On the side we can clearly see how the part of the roof has been reduced, so that the proportion of the sheet metal, in front of the window, is predominant, giving that dynamic look so characteristic of coupes.


As for the rear, we continue to observe the straight lines of its headlights, which would continue in the following series.

The boxy design has marked an era at Volvo.

As for the interior, we see the simple lines of the era, which contrasts with the baroque wood and leather: a splurge that must have fascinated the wealthy of the time. Speaking of the dashboard, it has all the essentials: speedometer, rev counter, fuel level, water temperature and a few service lights.

Let's take a look at the 260 range, which consisted of the following versions:

During the first years, the 262C could be chosen in any color combination, as long as it was only in silver metallic with a black vinyl roof. 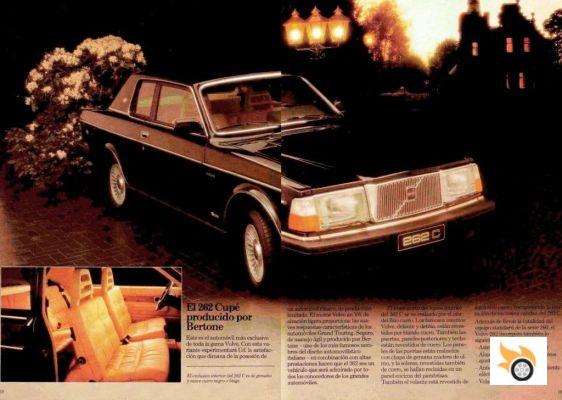 From 1979, it was also available in metallic gold without a vinyl roof. That year, a new rear end was also introduced on all 200-series sedan models with a trunk descending at the rear end. The taillights were also new and wrapped around the corners of the body. In 1980 the combination of black and light blue metallic and silver metallic with vinyl roof was discontinued. In the USA, the model was sold under the name Volvo Coupé from 1980 onwards.


The most prominent model year was also the last. In 1981, the 200 series underwent a major facelift with the introduction of new, slimmer bumpers and new headlamps. The B27E became the B28E when the engine displacement was upgraded and a further 14 bhp was added. The new colour scheme was a two-tone paint scheme of gold and tan.

The intention was to produce 800 units per year, but the demand expectations remained very low. Except for 1977, when production started late, and in the last year of the model, production figures were more than double the forecast. By the time the last cars were sold in 1981, they were already considered collector's items. In total, 6,622 cars were built between 1977 and 1981, 75% of which were sold in the United States.

It was not until 1985 that the successor to the 262C was introduced: the Volvo 780. The collaboration with Bertone continued, as the 780 was designed and built in Italy.

By 1966, car manufacturers were already thinking about reducing costs by forming alliances with each other on a one-off basis. This was the case between Peugeot and Renault, who built a factory in 1969 in Douvrin (France) to manufacture some common components.

In June 1971, Volvo thought it was a good idea to save costs, taking advantage of economies of scale, so they knocked on the door of the two French manufacturers, to jointly manufacture a 6-cylinder V8 engine (initially it was a V8, but it was discarded due to consumption and production costs), which would be produced in the new factory in Douvrin, under the supervision of Société Franco-Suédoise de Moteurs-PRV.

Thus was born the B27E engine that would be mounted in the 262C, a 2.7 litre V6 with 140 hp, in its injection version (it was also marketed with SU carburettor and produced 125 hp). It was the same engine as the one fitted in the other body versions of the 260 series, and thanks to the use of aluminium, it would manage to drop below 150 kg on the scales. 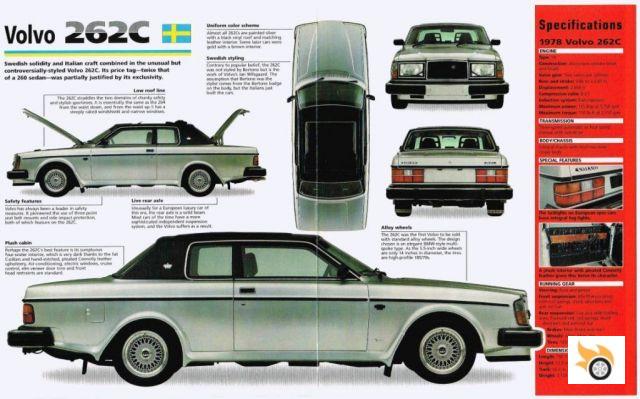 Although very prolific, the B27 series suffered from some reliability problems, which were solved in the next version, the B28.

The 260 series was available with the M45 4-speed gearbox, the M46 automatic with overdrive, the M47 5-speed manual and the BW35, also automatic.

As for suspensions, it was equipped with MacPherson in the front axle, leaving a rigid axle with tie rods and Panhard bar in the rear, a very common configuration at the time. Both axles mounted stabilizer, springs and hydraulic dampers, along with disc brakes on all four wheels.

Here we tell you some curious facts about the model: 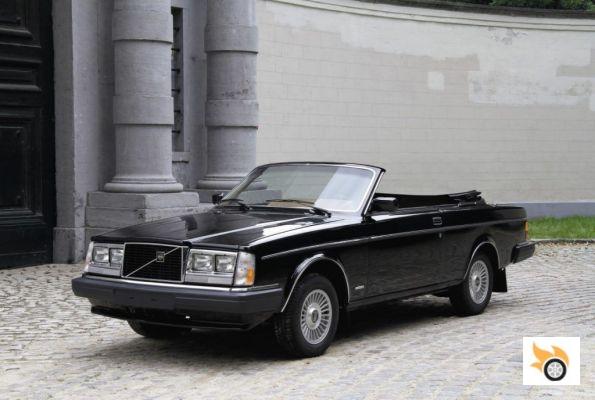 So much for our humble tribute to the Volvo 262C on its fortieth birthday. Another brilliant and polarizing design by Jan Wilsgaard, which has already gone down in history as one of the coupes with the most personality, and which marked an era in Volvo with its design line.

Will we ever see cars with the Saab logo again? ❯