This diesel engine will be available for the Civic exclusively in Europe and is one of the first to meet the WLTP (Worldwide Harmonised Light Vehicle Test Procedure) standard, which is much more realistic and demanding than the NEDC. This new type-approval cycle comes into force this year and, according to it, the Civic diesel is rated at an average fuel consumption of 3.7 l/100km and emissions of 99 grams of CO2 per km. These are really interesting figures, but we'll have to test the car to see how close the new type-approval cycle is to reality. In the previous generation, the 1.6 i-DTEC proved to be one of the most economical diesels in its class.

In other words, under the new - and harsher - WLTP cycle, Honda is now achieving figures that its competitors achieve with the unrealistic and unrepresentative NEDC.

The improvements for this engine consist of a lower friction pistons, which have been manufactured with a steel alloy with chromium and molybdenum. It also features a new cylinder grinding system, which also contributes to smoother piston movement. The engine block is made of aluminium and cast flanges have been included to give rigidity to the block and also minimise vibrations, as well as achieving a reduction in weight. 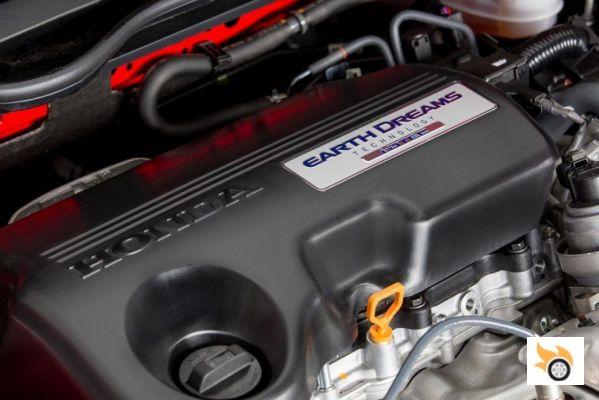 This engine is also one of the first to pass the Real Driving Emission (RDE) test for particulate matter and nitrogen oxides (NOx). The engine incorporates a new, larger catalytic converter and a higher content of precious metals - silver, platinum and neodymium - that store nitrogen oxide gas until the regeneration cycle. A soot sensor detects when regeneration is required. This is what is known as a "NOx trap", not to be confused with the selective catalytic reduction system; in English: it does not use urea. Under the RDE regulations it is much more difficult to get an engine homologated, as the nitrogen oxides must be very low in real conditions, where there is no room for deception.

The advertised performance is about right for that power level, if it actually manages to get under 4 l/100 km in real-world conditions it will become one of the most interesting diesels in the C-segment. The new engine, which will be assembled at Honda's Swindon factory in the UK, will be available in both four-door and five-door versions of the tenth-generation Civic.


By the middle of next year we will also be able to combine this engine with a 9-speed torque converter automatic gearbox, the first time it has been fitted to a front-wheel drive car. At the moment Honda has not provided data about the price and equipment of this new diesel version.