Its 5.0 V8 M119 engine produces 326 hp, it doesn't seem much for the nonsense you see nowadays (the A 45 AMG gives more power with a 2.0) but it has the character and charm of an old V8, no turbo, a beautiful sound and a brutal consumption. We don't know if that was the reason why its only owner hardly used it.

The world is very badly distributed, of course. This great car was given to her for her birthday on 29 September 1996, and has been sitting in a garage in London for 20 years. The excuse, it seems, is that he lost the keys; to feed him on the side. Sometimes God gives bread to those who have no teeth, is an epic pagafantada. The car is in impeccable condition, Coys even provides photos of the underbody, and it seems to have been wonderfully preserved, without exposure to the elements or the passage of time. It even has a favourable MOT (MOT in the UK). 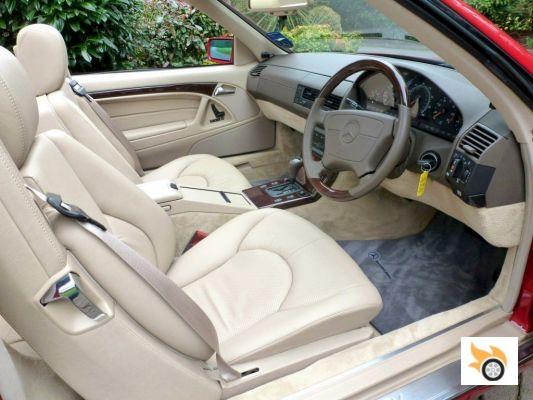 It only shows 81 miles, about 130 kilometres. If it had been in use, its value would be around 5,000-7,000 pounds, but as it is new, it can cost almost twice as much as an SLC, they estimate 45,000-55,000 pounds, up to 65,000 eurazos. In its equipment we can find everything: six CD changer, leather upholstery with heated seats and electric adjustment, wood inserts (real), automatic transmission, digital on-board computer (new in 1995), etc.. Quite an opportunity to taste driving a classic when it was new, but in 2017.

Let's hope its new owner will be more considerate with it....